Stall that Slide to the '70s 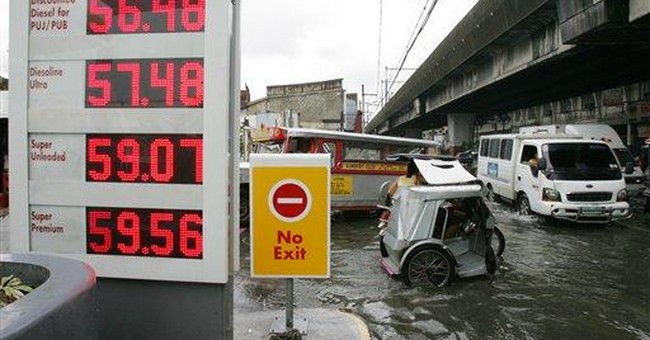 There aren’t many who long for a return to the 1970s. Those of us old enough to recall that decade tend to think of gas lines, a hostage crisis and Watergate. President Carter never used the word “malaise,” but he acted as if America was doomed to decline, and it was his job to make sure it went smoothly.

There’s some malaise around today, too.

High gasoline prices are back. Petroleum-producing nations (such as Venezuela, Iran and Saudi Arabia) again hold us hostage -- this time for petro-dollars, even as the value of our currency slides. And polls show both the president and Congress have their lowest approval ratings in decades.

With so much discontent, who would want to go back to the policies of the 1970s? None other than the self-professed presidential candidate of “change,” Barack Obama.

Sen. Obama recently unveiled an economic plan that revolves around raising taxes on the wealthy. His plan would jack up the top marginal rate to roughly 50 percent for those making more than $250,000 a year. And that doesn’t include state and local taxes.

Obama promises to “soak the rich” three times over by 1) repealing the Bush tax cuts on capital gains and dividends, 2) bumping the top two tax rates back up to 36 and 39.6 percent and 3) slapping them with additional Social Security taxes. The total tax pain would be greatest for those who live in high-tax cities and states, including New York, Maryland and California. Some there would have to pay up to 66 cents in taxes on every new dollar they earn. Confiscatory tax rates like that only encourage high earners to work less and produce less.

Those sort of tax rates would take us right back to the Carter era. That’s the last time rates were that high.

Of course, when tax rates are high, wealthy people spend their time developing tax shelters instead of reinvesting in their businesses. That may be great news for lobbyists and tax attorneys, but it’s bad news for everyone else.

It was a true “candidate of change” who rescued the U.S. from the doldrums of the ’70s. “Reaganesque lower taxes and deregulation,” economic historian John Steele Gordon wrote in The Wall Street Journal recently, “sparked an enormous economic boom that has now lasted, with two brief and shallow recessions, for more than 25 years.”

The rest of the world learned Reagan’s lesson, too. Most countries slashed tax rates after we did, and generated growth of their own. By reversing that policy, Sen. Obama would put the U.S. in with an ever shrinking group of nations that cling to the failed policies of the past, and are suffering for it.

Only six of the top 30 industrial nations have a tax rate for all levels of government combined that adds up to more than 55 percent. Obama’s tax plan would give us a higher top rate than such high-tax nations as Sweden and Denmark. And these sorts of tax rates slow the economy.

Among those six high tax countries the average unemployment rate is 7.35 percent. Contrast that with our own unemployment rate, which recently rose to 5.5 percent -- still a low figure by historic standards.

The math is simple: Lower tax rates encourage more economic growth and lower unemployment. Higher tax rates lead to slower growth and lower wages. In 2001 and 2003, President Bush pressed Reagan’s tax-cutting policies even further, slashing tax rates and boosting the economy into several more years of growth. The sensible policy today would be to make those cuts permanent, so business owners and entrepreneurs could plan for the future.

The only other option is a return to the discredited policies of the ’70s. And that’s a change we simply can’t afford.