NFL or Gilligan’s Island, the Choice Is Easy

D.W. Wilber
|
Posted: Oct 28, 2017 12:01 AM
Share   Tweet
The opinions expressed by columnists are their own and do not necessarily represent the views of Townhall.com. 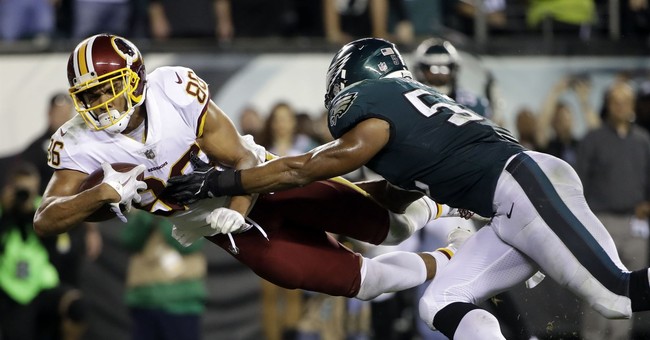 It’s not a tough decision at all, for me the choice is obvious.  This year I’ll be watching reruns of Gilligan’s Island before I’ll watch a single down of the National Football League. I just don’t have the interest level that I once had in watching professional football, it simply doesn’t appeal to me anymore.

And it won’t appeal to me until the NFL decides to stand up to the thugs and prima donnas on its payroll who want to protest against the very country that has enriched them far beyond that of most Americans.

So until the NFL decides to uphold some standards for on-field behavior which includes good sportsmanship, and overall good citizenship off the field as well, I’ll be seeking my Sunday afternoon entertainment elsewhere.

Of course I also lay some of the blame on the American news media for once again focusing on the irrelevant like unemployed quarterbacks, instead of paying attention to things that are much more important to most Americans like an improving economy that is set to roar once Congress passes a new tax plan; once again having a president who upholds the rule of law by securing our borders; and having a military that has been returned to protecting this country, instead of being focused on transgender issues.

Perhaps the news media could remind us of the increase in the number of police officers killed in the line of duty so far this year, compared to the years before Barack Obama became president and started to encourage a war on the police in America.  Those same police officers who put their lives on the line every day are now being protested against by some of those same over-paid NFL players.

So I simply find it difficult to share any common ground or agree with people who are paid millions of dollars to do nothing more than play a game, while claiming to be the ‘victims’ of some sort of police oppression in America.  Somehow claiming victimhood while driving a Bentley.

From my point of view those professional sports athletes who are refusing to show respect during the playing of America’s National Anthem are at the least being disrespectful to the country that has given them the opportunity for wealth and fame that the vast majority of Americans could only dream of, or at the worst they are stomping on the graves of the countless American military service members, and yes even the many police officers who have made the ultimate sacrifice on behalf of a ‘mostly’ grateful nation.

Once Colin Kaepernick decided to take a knee during the playing of the National Anthem he sealed his own fate with regards to his professional football career.  While America might be a polarized nation politically, one thing most can agree on.They’re not really interested in the political views of highly paid professional athletes.  Just catch the damn ball!

Most Americans would prefer that they focus on their performance on the field of play and keep their political views to themselves.  And considering the lousy television ratings of Hollywood award programs like the Oscars, it would seem that most Americans could also care less about what the George Clooneys and Michael Moores of the world have to say as well.

Based on his poor performance on the football field I think it’s a good bet that Colin Kaepernick won’t be enshrined at Canton anytime in the future. Likely his career is over since most football team head coaches and ownership don’t want the distraction he would bring to their club.  Not to mention that his stats just aren’t that good.

He’s not good enough of a player for an owner to spend a lot of money taking a chance on when there’s plenty of other talent out there who would truly appreciate the opportunity given them to play in the NFL.

Colin Kaepernick likely wouldn’t be welcomed by many of the fans either.  The same fans who pay his salary and keep ownership flush with money to invest in draft picks instead of washed up malcontents. No Hall of Fame in Colin’s future, just a hall of shame.

As for me, if NFL players want to join the Colin Kaepernick bandwagon and try to force his return to the game, then they will have lost me as a viewer forever.  I’ll be happy to watch reruns of Gilligan’s Island, or just read a good book on Sunday afternoons.  Both would be far more entertaining.