D.W. Wilber
|
Posted: Oct 05, 2017 12:01 AM
Share   Tweet
The opinions expressed by columnists are their own and do not necessarily represent the views of Townhall.com. 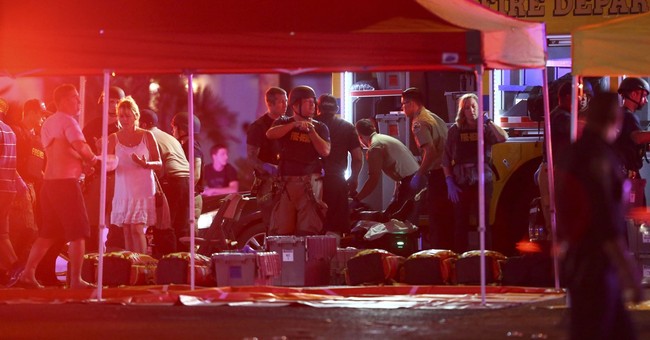 With every tragic incident that occurs in this country, there is always one constant. One fact that we can all depend on that ties each and every incident together. And that is the immediate entry into the public conversation of the conspiracy theorists and other self-proclaimed ‘experts’ who will quickly emerge from the woodwork espousing their ‘truths’ on social media. The Gospel according to ‘fill in the blank.'

With the recent tragedy in Las Vegas, the conspiracies have already overtaken the facts that have thus far been uncovered by the law enforcement professionals investigating this horrendous crime. And likely in some cases, these conspiracies may even hamper the investigator’s efforts to uncover exactly what happened, by injecting false suppositions into the conversation that the police sometimes have to waste their valuable time publicly refuting.

Certainly we have discovered over many years that the government hasn’t always been honest with us, and has played fast and loose with the truth on many occasions. So maintaining a skeptical eye is understandable and often advisable. But the simple truth is that there isn’t a government ‘boogeyman’ involved in every tragic incident that happens.

The investigation into the Las Vegas mass shooting has barely scratched the surface, and the ‘Keyboard Forensic Experts’ are already injecting one false claim after another, including claiming a cover-up by the police. Give me a break! And give the police a break!

Consider the fact that every single concert goer – perhaps twenty thousand – are technically considered an eyewitness to a major crime. Standard police procedure is to interview every potential witness to a crime. I wonder how long it’s going to take to interview all the ‘witnesses'?

Obviously it would be impossible, and the investigation would grind to a halt with police resources tied up trying to sort through all of the people at the concert who really may have important information to share, and those well-intentioned people who just want to help and believe they have something important to share, when the reality is they have nothing of value to offer from an investigative standpoint.

And then there are the ones who simply want to inject themselves into the investigation for their own ego gratification, so they can go back to their friends and tell them all how they contributed the key piece of information that broke the case wide open.

And there are others who are just on their own fishing trip, simply wanting to know what the police know and might inadvertently share with them during an interview. In other words, being nosey.

The police investigators have a monumental task ahead of them, and dealing with claims of a police cover-up simply doesn’t help the situation. Especially when there is no evidence at this point that there indeed is anything nefarious going on.

Many of the claims of video evidence indicating something other than what the police have thus far released all have a logical and legitimate explanation. It’s a fact that the eye often sees what the mind wants it to see. That is why many prosecutors will tell you that they would rather not rely on eyewitness testimony solely during criminal trials. It just isn’t always reliable.

Others that have not been explained yet may simply be that the police are holding back some information from the public for investigative reasons. The public simply doesn’t have the right to know everything about an ongoing investigation. It’ll be released in due time when the police no longer feel it’s necessary to hold it back. Remember, they still must completely rule out that there are other people involved in this heinous crime.

Why do people spend so much time on social media spreading false rumors and “solving the crime all by themselves”? It’s only my opinion, but I think much of it has a lot to do with fear. Crimes like this scare people, and it makes them feel as though they have no control over their own lives.

Speculating with others and putting forth theories help them feel as though they’ve regained some control again. It subconsciously provides them with comfort, as though they are doing something to help return normalcy to their lives.

Few Americans have a real understanding of police procedures, how and why they do certain things a certain way. The answer is really pretty simple. They are involved in a search for the truth.

And they have learned hard lessons over the years that there are eight-inch thick telephone books out there with page after page of lawyers who are paid to poke holes in the case that police bring before the courts. So what may seem like a cover-up or delay tactics is nothing more than the police methodically and carefully dotting every ‘i,' and crossing every ‘t,' so it doesn’t come back and bite them later.

Criminal investigations never fit into a neat little box like they do on television, and they are never solved in an hour, minus the commercials. The search for truth is a long and difficult process. We need to give the police time to do their job, so they get it right, not quick.

Remember, it never ends up just being Colonel Mustard in the Conservatory with the Candle Stick.  And there isn’t a government boogeyman hiding behind every incident.