Don’t Let the Door Hit You on the Way Out

D.W. Wilber
|
Posted: Jan 01, 2017 12:01 AM
Share   Tweet
The opinions expressed by columnists are their own and do not necessarily represent the views of Townhall.com. 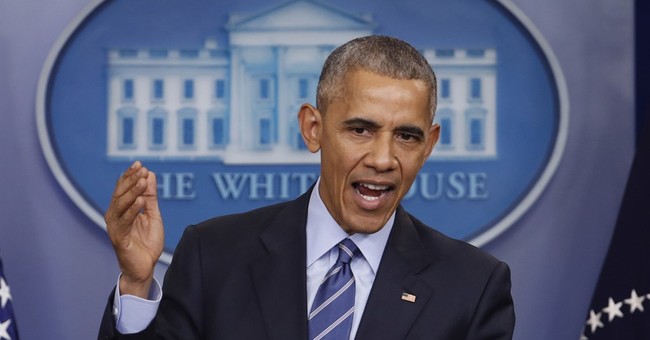 While pondering the last days of Barack Obama as president of the United States - not something entered into lightly considering that wasting one’s time pondering the intricacies of the digestive process of a clam is more rewarding - but nonetheless watching the Obama Administration in its death throes one is reminded of the old saying about ‘doors slamming against posteriors.’

Certainly one would expect any president to remain on the job right up until the appointed time when the satchel with the nuclear codes is passed off to his successor, but one normally doesn’t expect to see such a flurry of last minute activity in an outgoing administration as we are now seeing with Barack Obama.

With his recent hissy fit over the supposed Russian interference in our November elections, the knifing in the back of Israel, our closest and most reliable ally in the Middle East, and an unprecedented land grab in the western United States – interestingly a region where Barack Obama has very little voter approval anymore – Barack Obama has shown that he intends not to bow out gracefully as an adult.  And that doing what’s best for the country by promising for a smooth transition into the new administration apparently was nothing more than politically expedient lip service at best.

Word emanating from the Trump transition team is that the Obama Administration has been less than helpful in preparing the hand-off of the keys to the White House, as was promised by Barack Obama when he met with President-elect Trump shortly after Trump won the 2016 election.  And which Barack Obama himself was the beneficiary of from the outgoing George W. Bush Administration, which went out of its way to be cordial and helpful to the new occupant of the Oval Office.

Claiming Russian interference in our recent election and lashing out with meaningless sanctions and expulsions of Russians from the United States, Obama’s actions were summarily dismissed by Russian strong-man Vladimir Putin with the wave of his hand.  Only Putin’s wave likely didn’t include all of his fingers. Obama was once again bested and insulted by Putin on the world stage.

Putin’s disdain for Barack Obama is obvious.  He views Obama as being on a par with any of the countless petty little dictators bought and paid for, and just as easily dismissed by Russia over the years.  Of no significance and not worthy of any respect or concern.  Simply ‘third world’ bumpkins used in the generational Cold War battles fought on every continent by the former Soviet Union.

The fact that Barack Obama actually heads up the government of the United States, Russia’s primary foe during the Cold War, is probably very humorous to an old KGB hand like Putin who came of age during a time when a real American leader like Ronald Reagan dictated to the Russians.  Putin has simply smirked as Obama nearly groveled at his feet promising Putin “more flexibility,” while asking for nothing in return.

At first Barack Obama probably believed that he could actually be pals with Vladimir Putin, considering Obama’s own leftist-socialist ideology.  But it was an unrequited love affair at best with Obama being given the back of the hand from his Russian counterpart.

Putin simply does not suffer fools easily.  And Barack Obama was definitely foolish to think that he could share space on the world stage with the likes of Vladimir Putin, not to mention other world leaders, men and women of ‘real’ stature.  He has simply been out of his league from ‘Day One’ of his presidency.

Our adversaries quickly realized that Barack Obama, while a gifted orator, hasn’t a clue about actually governing.  His entire presidency has consisted of one eight-year-long ‘campaign,’ with nothing of substance or value to leave behind as a legacy.  And his less-than-talented supporting staff fell far below the standards one would expect of those helping a president to guide our nation.

Outclassed and outplayed by Putin on a regular basis, Barack Obama’s dislike for the Russian leader became more and more obvious, particularly with his laughable attempt to stare down the Russian dictator during the 2016 G20 summit meetings in China.  The very same meeting where other world leaders were ushered in through the front door, while Barack Obama’s grand entry was made out of the ‘service entrance’ of Air Force One.  A slight not lost on those in attendance, particularly Vladimir Putin.

In just over two weeks Obama’s presidency will end and Americans will rejoice at the fact that the adults have returned once more to the White House.  And while it remains to be seen whether or not a President Trump will preside over a resurgent United States of America, both economically and militarily, there is one thing for certain.

Few, except the uneducated and ill-informed among Barack Obama’s die hard supporters, will get misty-eyed watching him walk out of the White House for the last time.  I suspect most Americans will more likely be thinking, “don’t let the door hit you on the way out.”