D.W. Wilber
|
Posted: Dec 13, 2016 12:01 AM
Share   Tweet
The opinions expressed by columnists are their own and do not necessarily represent the views of Townhall.com. 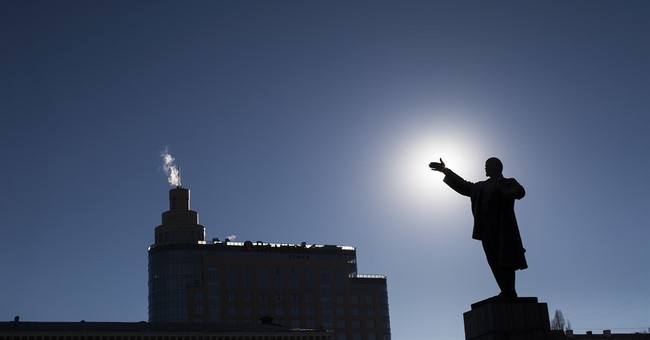 As has been anticipated for a while now, to quote Texas Senator and erstwhile Republican candidate for President Ted Cruz, the “Washington Cartel” has reared its ugly head once again over the allegations that the Russians somehow exerted influence to affect the outcome of the 2016 presidential election.

News flash folks, the Russians, Chinese, Iranians, many of our other adversaries and enemies, and even some of our friends have tried to influence our elections in one way or another for decades !  Just as our own Central Intelligence Agency has done the same thing with varying degrees of success, or embarrassment, in many other countries over many years.

So then what’s behind this supposed bipartisan effort to look into the allegations of Russian meddling ?  Is it out of a genuine concern about the integrity of our elections ?  I hardly think so.  If they were truly concerned about our election’s integrity we’d have a national voter ID law in place.

Is it an attempt by Democrat supporters of Hillary Clinton to try once again nullify the results of the recent election since their favored candidate didn’t win ?  Or is it an attempt to rein in – show him who’s boss if you will - the President-elect Donald Trump before he can even take office, since he is scaring the living daylights out of both sides of the Washington Cartel ?

At the forefront once again one finds the “maverick” Republican Senator John McCain and his good buddy Democrat Minority Leader Chuck Schumer.  To the casual observer it sure is curious how these two representatives of their respective parties can’t get together to agree on anything substantive for the American people, but they darn sure are able to be “collegial” when it comes to looking for ways to try to overturn the will of the voters who spoke resoundingly in November that they were fed up with Washington’s shenanigans.

Perhaps it’s because the career politicians who make up the “Washington Cartel” simply are fearful of what Trump represents, the will of the American people.  If unleashed through a Trump Presidency it may well threaten the very survival in office of career politicians like John McCain and Chuck Schumer, and far too many others.  One can only hope.

As an American I view the allegations of anyone meddling in our elections as a serious accusation.  As a former intelligence professional I look at this as a non-story.  Sorry, nothing new here, nothing to report.

Intelligence agencies of countries unfriendly or adversarial towards the United States trying to interfere and influence in our elections has been a fact for nearly as long as we’ve been holding our national elections.  The former Soviet Union regularly supported the candidate for the Communist Party of the USA in elections, and also attempted to introduce news stories that were more favorable towards the mainstream candidate who they were least opposed to.

Is it a surprise that news items that were uncomplimentary towards then candidate Ronald Reagan found their way into America’s so-called “mainstream media” during the 1980 and 1984 elections ?  Reagan scared the Soviets and they pulled out all the stops to try to influence the election between Reagan and Jimmy Carter – the Soviet’s preferred candidate – and later between Reagan and Walter Mondale.

The current attempts to discredit Trump’s presidency – and make no mistake that’s what’s going on here - are nothing more than a despicable attempt to cast a shadow over Trump’s election.  And quite possible to provide cover for the “Washington Cartel” to once again do anything but the bidding of the American people.

It will be interesting to see how much steam this effort gains in the coming days, particularly with the eager help of the so-called “mainstream media”.  Which I prefer to call the ‘fraudulent media’, since any credibility that most of them had has long ago been squandered with their open support of Hillary Clinton for the past thirty years, knowing full well her level of corruption and deceit.

Here’s a novel idea !  If the Washington Cartel is so concerned about the integrity of our elections perhaps it’s time they get together and implement a national voter ID law so that our elections really are protected !  That would go a long way towards protecting the integrity of our elections and prevent the voter fraud that has been the staple of the Democrat Party for years.  At the very least if the address on a phony ID comes back to a cemetery we’ll know the Democrats are at it again.

Phony claims of Russian tampering aside, let’s protect the right of only AMERICAN CITIZENS to vote, a right which was bought and paid for by the spilt blood of America’s veterans.