D.W. Wilber
|
Posted: Aug 14, 2016 12:01 AM
Share   Tweet
The opinions expressed by columnists are their own and do not necessarily represent the views of Townhall.com. 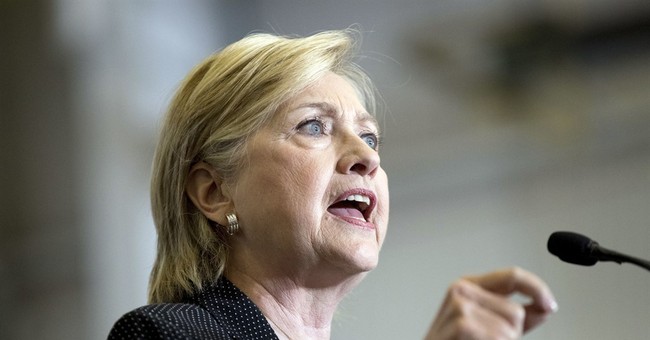 With her criticism of Donald Trump for some of his recent comments, the Democratic Party’s nominee Hillary Clinton was quoted as saying “words do matter.” In that regard, she is 100 percent correct. Words can be used to misinform, deceive, and create lies told over and over to cover for unethical and even illegal conduct—something she knows a great deal about since she happens to be the most dishonest, corrupt, and despicable politician in American history.

Since words definitely do matter, perhaps it would be appropriate to take a look at the record with regards to Clinton’s own use of words. This is otherwise known as “Clintonian Linguistic Gymnastics.” Were there an Olympics for dishonesty, Hillary and her husband Bill would certainly be the holders of multiple world records!  Lies and deception are what the Clintons do best.

When her husband was president, then-First Lady Hillary Clinton was called to testify about the Whitewater scam she and her husband were involved in during their Arkansas days.  During her sworn testimony as part of the special prosecutor’s investigation into Whitewater, Hillary Clinton used the words “I don’t remember,” “I don’t recall,” or some variation thereof countless times.

So many times, in fact, that one might question if she is really the “smartest woman in the world” as so many profess her to be, since she can’t seem to ever recall a thing about any of the questionable activities she has been involved in over the years.

Of course, many lawyers will tell you that using the “I don’t recall” defense is a common tactic criminals will use in order to avoid admitting criminal conduct or committing perjury during sworn testimony.  That way they can avoid embarrassment when subsequent evidence or investigation may show that they indeed did have involvement with criminal acts.  Everyone experiences memory lapses, so it would be difficult to prove committing outright perjury in her sworn testimony if she simply “couldn’t recall”.

As a hot-shot lawyer who once used words to help free a client she was defending from serious criminal charges for raping a 12-year-old girl, Hillary certainly knew this.  It seems that to Hillary, “justice” matters much less than winning does. That “win at all cost” attitude has been her guiding principle throughout her career, as opposed to just doing what’s right. Of course the same can be said of the entire Democratic Party, considering their support of Clinton in spite of all the evidence of her lies and corruption.

Take her response to the Benghazi tragedy. Four Americans lost their lives as a result of Clinton’s incompetence and failed policies as Secretary of State. Yet Hillary was quick to place blame instead on an unknown video. Lying is such an art for her that she can fabricate a story almost on the run.

During her first testimony about Benghazi, the former Secretary of State was very well-rehearsed, rising to the occasion and exhibiting Academy Award-worthy theatrics as she forcefully said “what difference does it make.”  Words which certainly mattered to the families of the four who died in Benghazi as a result of her lack of leadership at the State Department.

Interestingly, the former Secretary at one point claimed to “accept responsibility” while apparently accepting no consequences for being responsible for the failure of policy in Libya which led to the North African nation’s fall into chaos, and ultimately leading to the deaths of the four brave Americans. Hollow words indeed.

Another perfect example is Hillary’s tortured responses to the e-mail scandal which has beleaguered her for the past year. Watching her initially claim that “nothing classified was ever sent,” to “nothing was marked classified,” to “nothing was classified at the time it was sent” is simply “linguistic gymnastics” at its finest. (Also known as “lying.”)

Clinton has lied so much about her e-mail usage as Secretary of State that it’s hard to follow anymore. And while the FBI apparently succumbed to political pressure and chose not to seek an indictment, it doesn’t mean that Hillary Clinton committed no crimes. It’s simply means the standards were changed to accommodate the Clintons once again.  Fortunately for the Clintons they’ve been able to scam so much money since President Bill Clinton left office that they’re able to afford to keep a stable of high-dollar lawyers on retainer to defend them against all the corruption charges.

And while former President Bill Clinton continues to defend his wife during his campaign appearances on her behalf, his words fall on deaf ears considering his record of lying about his own crimes and misconduct. Bill Clinton lacks any credibility and certainly has no conscience.

It would seem that the one lesson Hillary Clinton has retained from her lawyer days is that people suspected of committing crimes should pay attention to their Miranda Rights and do their best to “remain silent,” since she’s only had one limited press conference in nearly a year. The less one says the harder it is to catch them in a lie seems to be the message here.

But Hillary has shown that she has had a little trouble following this advice, considering all of the video evidence that at times tends to get in the way of her lies, such as her “landing in Bosnia under sniper fire.”

So perhaps she’s not the “smartest woman in the world” after all. Just the most dishonest, corrupt and despicable politician in American history.