Duggan Flanakin
|
Posted: Jan 19, 2021 11:34 AM
Share   Tweet
The opinions expressed by columnists are their own and do not necessarily represent the views of Townhall.com. 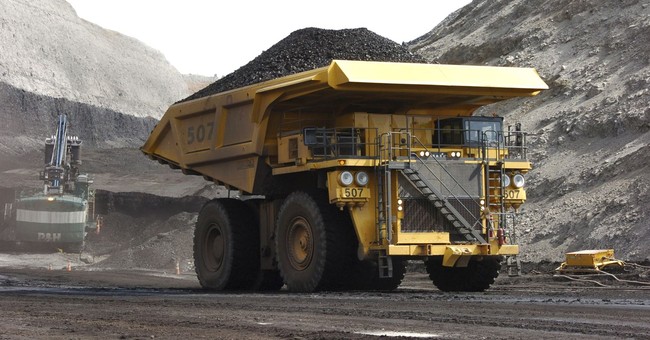 As Joe Biden and Kamala Harris take the reins of government and launch their program to “transition” America away from fossil fuels, they need to consider some hard realities. Chief among them is that no Green New Deal can succeed without major increases in US mining and processing – unless they want to make America even more dependent on China and Russia.

China, Horrocks noted, has only a third of global reserves of rare earths, but in 2017 produced over 80 percent of the global supply of rare-earth metals and compounds, and its exports that year to the US accounted for 78 percent of the 17,000 tons of US rare-earth imports. Even rare-earth metals mined in the USA are processed in the People’s Republic – because China now owns the US deposit and we’d prefer to pay the cheaper prices associated with processing under China’s abominable pollution, wage and workplace safety rules.

Christopher Barnard, national policy director at the American Conservation Coalition, is but one of many who agree that a reliable, affordable domestic supply of rare-earth metals is critical to building a “green” economy. Last month Barnard warned that “the geopolitical, economic and environmental risks” inherent in near-total reliance on a potentially hostile power “can no longer be ignored.”

The Chinese near-monopoly (it was worse before Japan built a new supply chain after China blocked all rare-earth exports in 2010) is largely a creation of activist-driven US anti-mining policy. There are plenty of rare-earth deposits in the USA, but extracting them is not photogenic. Barnard laments the “regulatory minefield of labyrinthine local, state and federal rules” that has turned permitting into a two-to-three-decade adventure in frustration.

Over the past decades, lawmakers have all but banned mineral exploration and development on minerals-rich federal lands. The few once-active rare earth mines are now long shuttered, largely due to high compliance costs. Mountain Pass, the sole US operating rare-earth mine, lost two years of production due to a 2016 bankruptcy and still sends its mined ore to China for processing.

To counter US dependence on Chinese imports, in September 2020, President Trump signed Executive Order (EO) 13953 declaring a national emergency in the mining industry. The order charged the Interior Department with increasing domestic production of rare-earth materials, to reduce America’s dependence on China for these building blocks for 21st century technologies. EO 13953 built on his December 2017 EO 13817 that required the Interior Secretary to identify critical materials and reduce “the Nation’s vulnerability to disruptions in the supply of critical minerals,” especially those from China and Russia.

Many of the recommendations in EO 13953 were incorporated into the Energy Act of 2021, part of the Consolidated Appropriations Act that also funded pandemic relief. The new law requires the Energy Department to conduct a research and development program for advanced separation technologies for extraction and recovery of rare-earth elements and other critical materials from coal and coal byproducts. A coequal goal is to ensure mitigation of any potential environmental and public health impacts from these activities – which is always required for U.S. operations, though not for those in or by China.

In addition, during Trump’s final days, the Bureau of Land Management (the other BLM) announced new decisions that took effect January 15 expanding potential mining operations on federal lands, adding mining to the list of industries that can receive fast-tracked permitting (critical to getting any new rare-earth mines operational), approving a new mine in Nevada for lithium (a critical element in electric vehicle batteries), and approving a land swap to ease final approval of an Arizona copper mine.

With these final acts, the Trump administration will have laid the groundwork to let the “clean-energy-focused” new government have a shot at meeting the raw materials needs for the 21st century technologies that Presiden-elect Biden has promised will drive tomorrow’s U.S. economy. Of course, China may use its leverage to try to undercut any U.S. producers, especially if Biden lifts (or fails to impose) tariffs aimed at offsetting China’s unfair advantages from its unethical and dirty mining and forced labor practices.

Will Biden and Congress undermine all this? Anti-mining Democrats were quick to object to the last-minute BLM actions. Rep. Paul Grijalva (D, AZ), whose own approach to U.S. mining has been called “good for China, bad for America,” has said President Obama’s 2015 FAST-41 law, which greased permitting for utility projects, was “never intended … to cover the mining sector.”

But Rich Nolan, president of the National Mining Association, lauded the BLM move, stating that, “American mining is key to successfully repairing our nation’s infrastructure.”  Previously, Nolan had reiterated his organization’s stance that “the very technologies essential to our recovering economy will be built on a foundation provided by mining. It’s now absolutely essential that smart policy recognizes this need and opportunity.”

The Biden campaign privately told U.S. miners it would support boosting domestic production of metals required to make electric vehicles, solar panels and other products critical to his climate plans. But this would represent a shift from Obama policies that included “rigorous environmental regulations that slowed U.S. mining sector growth.” It’s also anathema to environmental pressure groups that support and advise Biden.

Green groups in Minnesota, Nevada and Arizona – along with some Native American tribes – have begun pounding the drums of dissent. For example, Save the Boundary Waters opposes a Twin Metals copper mine in Minnesota; the project already has federal permits but is facing court challenges. Spokesperson Jeremy Drucker complained, “Mining companies have been using EVs and climate change as a cover to push their own agenda: profit.”

Then there is Biden’s nomination of New Mexico Native American Deb Haaland to head up his Interior Department. Native American groups have opposed the fast tracking of approval of the Resolution Copper Mine, which could supply up to a quarter of growing U.S. copper demand for 40 years. Native Americans say the mine would desecrate sacred lands. How will Haaland, and her boss, handle this touchy issue, given her ties to tribes opposing the mine and the vital role of copper to the GND?

Meanwhile, Biden continues to refer to Kamala Harris as “President-Elect” and speaks of a “Harris-Biden Administration.” One wonders how much influence VP Harris will have on Biden administration planning and policy, since she is on record as opposing almost any new domestic mining operations. Put another way, who will really be in charge of our energy and economy?

The ultimate question is, should America be dependent on China (and Russia) to supply the tools for the new economy? Or will the Biden-Harris administration follow up on the Trump approach to rebuilding the U.S. rare-earths mining and processing industry, to avoid near-total dependence on major human rights violators? In other words, will Biden-Harris put America’s clean energy future in China's hands?

Duggan Flanakin is Director of Policy Research at the Committee For A Constructive Tomorrow (www.CFACT.org)