Trump Is a Born Dealmaker, Let Him Do His Thing

Dr. Shea Garrison
|
Posted: Jun 18, 2018 12:01 AM
Share   Tweet
The opinions expressed by columnists are their own and do not necessarily represent the views of Townhall.com. 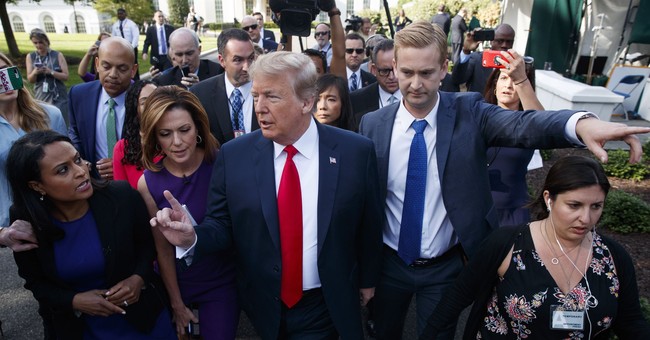 President Trump is a businessman and a deal-maker—we knew that when we elected him. His administration operates differently from any other previous presidential administration, including in diplomacy, where deals are truly an “art form.” So, it is not surprising President Trump threw protocol out the window when he met last week with Chairman Kim Jon Un, the first-ever meeting between a sitting U.S. president and North Korean leader.

Those disappointed with the outcomes of the summit posit that Kim, not Trump, benefited most, suggesting the U.S. gave up more than it got, following in the footsteps of previous U.S. administrations. For example, through threatening the U.S. with armed ballistic missiles, Kim “won” a private meeting with an American president, a longtime strategic goal of his family’s regime. Further criticism says the meeting itself gave legitimacy to the dictatorship of a gross violator of human rights, and that the result of the meeting — the U.S./DRPK joint statement — is only a one-page, “unsubstantial” document which does not outline specifics of denuclearization, nor give a timeline for doing so.

Valid points, but in light of previous U.S. administrations’ “flimsy” agreements and failed diplomacy with North Korea, it is important to withhold judgement and give Trump’s new approach to foreign policy a chance. In previous administrations, the U.S. has seen a bottom-up approach to diplomacy, using lower-level officials to outline a deal, only bringing the president in at the end of negotiations to sign, seal, and deliver.

Instead, Trump strategically brought the prestige of the U.S. presidency to North Korea, playing to the ego of an arrogant egomaniacal president and building trust, which in turn possibly opened the door to more substantive diplomatic discussion and relationship. He even gave a brief private meeting to Kim, which Trump called “a critical gauge of whether a deal is likely.”  As Trump remarked when asked about the minimum outcome he expected from the summit: “The minimum would be a relationship — you’d start at a dialogue … as a deal person, that is important.”

In addition, he used purposeful rhetoric to lay groundwork for the meeting, sometimes smoothing Kim’s feathers, and sometimes being tough, critical, and dismissive — balancing his response in accordance with the need, but always with the ultimate objective of controlling the outcomes.

One example is when, in mid-May, Kim threatened to cancel the summit. Trump abruptly and publicly cancelled the meeting with a letter citing Kim’s “tremendous anger and open hostility” in statements regarding the U.S.  In immediate response, Kim back-pedaled and offered the U.S. the “time and opportunities” to reconsider the meeting “at any time, at any format,” which Trump graciously accepted. However, he later warned Kim, “It’s a one-time shot” for negotiations, telling the world, “I think it’s going to work out very well” but that at the same time Kim “won’t have that opportunity again.”

“Trump the Negotiator,” for whom deals are an “art form,” is most likely in play here — the billion-dollar businessman who knows how to build lasting coalitions for maximum productivity and profit. Over the past eighteen months, his unorthodox methods have often brought concrete and prosperous results — such as record lows for unemployment, near destruction of ISIS, reduction in illegal immigration, and securing the release of three hostages from North Korea, just to name a few.

Certainly, more details and specifics to the agreement must be outlined, definitions of what constitutes denuclearization must be clarified, and mechanisms to verifiability firmly laid out. As Mike Pompeo pointed out, the summit only opens discussion and sets conditions for future productive talks.

But Trump knows negotiation and how to get results, and is possibly laying the foundation for an agreement, not just for agreement’s sake or for the illusion of progress, but for a process that will actually have the power to accomplish full U.S. objectives. That will not happen overnight or in just one meeting. As the president himself has said: “There’s a good chance it won’t work out,” but “there’s probably an even better chance it will take a period of time.”

Let’s give President Trump a chance to do what we elected him to do—make a deal, in his own way.

Editor's note: This column has been updated since publication.