Dr. Deane Waldman
|
Posted: Jun 08, 2017 12:01 AM
Share   Tweet
The opinions expressed by columnists are their own and do not necessarily represent the views of Townhall.com. 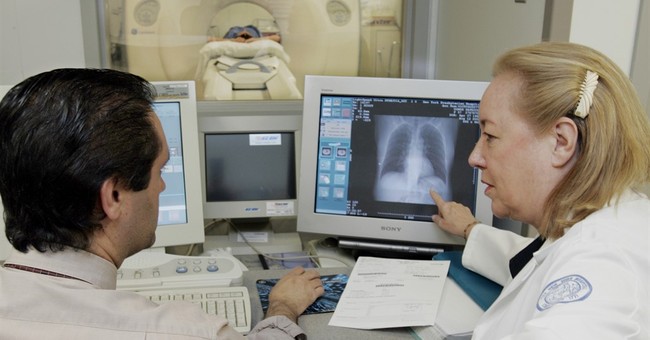 The title question may seem silly, even ludicrous. It is not.

In the United States today, a truck driver is free professionally—he chooses which gear to use going up a hill. An accountant is free economically, meaning he or she can accept whatever job is preferable. You are free to choose whatever dry cleaner you want—successful cleaners know they work for you. Lawyers are free politically, as they can choose which cases to take and which ones to reject.

None of the above is true for a clinical physician simply trying to practice medicine.

People who never went to medical school—insurance actuaries, state insurance commissioners, and multiple federal regulators—dictate to doctors what they can do, and especially, what they cannot. Hospital lawyers impose federal advisories and guidelines as though they were brought down from Mount Sinai. The only person not practicing medicine on you seems to be your doctor.

The federal government believes it must protect patients from their doctors. Physicians are no longer highly valued and explicitly trusted professionals, at least according to Washington, which erects roadblocks to prevent a physician from exercising independent judgment. There are mandatory computer programs that tell the doctor the acceptable diagnosis; what tests to order (and which are not allowed); where the patient must have tests done; what drugs can and cannot be used and how to order them; and what must be done after hospital discharge.

Professionally, a modern physician is a computer program with the federal government as programmer.

A doctor is not free to choose what type of medicine to practice. In 2014, the average U.S. medical graduate left school carrying a debt of $180,000 in student loans. This requires newly minted doctors to take the highest paying job they can find if they ever want to get out from under the lender’s heavy hand. That is why there are more cardiologists than primary care doctors.

Successful companies in service industries have employees who know they work for the customers, even though the company signs their paychecks. Physicians are taught that patient welfare comes before everything. Graduating MDs all swear to, “use treatment to help the sick according to my ability and judgment, but never with a view to injury and wrong-doing … Into whatsoever houses I enter, I will enter to help the sick … I will abstain from all intentional wrong-doing and harm, especially from abusing the bodies of man or woman, bond or free … And whatsoever I shall see or hear [I shall view] such things to be holy secrets.” Hippocrates wrote that doctors work for patients.

A U.S. physician is not free to make individual clinical decisions. They implement federal mandates, agency advisories, study modules, guidelines, clinical algorithms, security protocols, and a host of regulatory compliance tasks … or else. It sounds as though the modern physician is a robot, but professional reality is worse: they are slaves of a “right” to health care.

What is a right, operationally? It is a capability that everyone has, automatically, simply by being alive. You don’t pay for a right or qualify for it: free speech, religious liberty, or the right of assembly (First Amendment). If you own a car, you have the right to keep it (Fourth Amendment). One person’s right to act freely cannot infringe on another person’s freedom: recall “Life, Liberty, and the pursuit of Happiness” as well as the Republican Guarantee in Article IV, Section 4 of the U.S. Constitution.

What is health care, operationally? It is a provider’s physical and mental labor. Health care is the personal service of one individual acting as fiduciary for another individual. Health care is someone’s work product. According to the father of medicine, Hippocrates, it should be compensated. However, everyone else sets their own prices, the federal government tells physicians how much they will be paid, take it or leave it.

If care by a doctor were a patient’s “basic human right,” then that patient could demand care (work product) from a doctor—whatever the patient wants, when and where desired, and the doctor would have to comply…for no money. (You don’t pay for a right!)

No matter whether you view your physician as a federal employee, a robot, a computer program, an indentured servant, or a slave, the answer to the title question is no: your doctor is not free in the practice of medicine for your best interest.