Still One Nation Under God 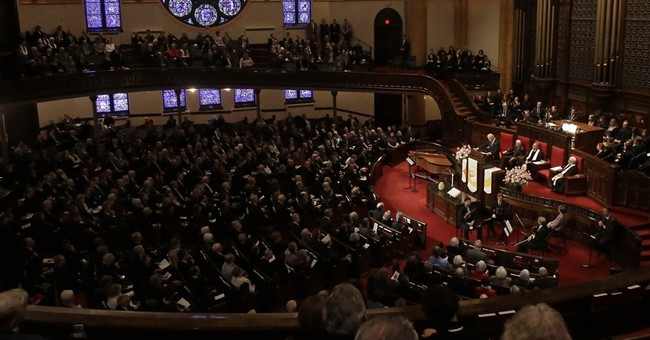 We used to characterize the Soviet Union as a godless, evil empire. Like many societies based on communism or socialism, the Soviets saw fit to minimize the importance of God and, in many cases, wreaked unimaginable persecution on religious people.

Why is faith in God anathema to such states? It's because they need to remove any authority other than themselves as the arbiter of right and wrong.

Interestingly, last year Russian President Vladimir Putin criticized Euro-Atlantic countries, including the United States, of becoming godless and moving away from Christian values. Some may bristle at such an accusation, but when you consider that many Americans are hesitant even to mention God or Jesus in public, there may be some validity to his claim. We also casually have tossed out many of the principles espoused in the Bible and have concluded that there's no authority greater than man himself.

The separation clause of the First Amendment of the U.S. Constitution is inappropriately applied to a host of situations that involve religion. By reinterpreting the law to mean separation of God and state, as opposed to the original intent of keeping the church from having undue influence over state affairs and keeping government from ruling the church, secular progressives have succeeded de facto in redefining part of the Constitution. Such success, however, can only be lasting if "we the people" continue to yield our values and beliefs in order to get along.

A number of years ago, some lawyers approached me to advise that we could not hang our "Think Big" banners in public schools. They claimed the "G" stood for God, and this would be tantamount to government endorsement of religion, which would be contrary to the First Amendment. I countered that the First Amendment also forbids government suppression of religious expression and suggested we pursue this argument at the U.S. Supreme Court.

This may have seemed like a bold and reckless statement, but it wasn't. I knew I would be going to the Supreme Court the next week to receive the Jefferson award and figured I would bring up this issue while I was there. And I did.

Justice Sandra Day O'Connor said we were nowhere near violating the First Amendment and that of course we could put up our banners in a public school without constitutional infringement. In this case, I did not back down in the face of bogus accusations, and we prevailed. We all must have the courage to fight for our beliefs, just as our predecessors fought for our future.

While there is no question that our Judeo-Christian values have taken a hit in recent years, we have not yet reached the point of a totally godless government that sets itself up as the supreme authority and giver of rights. As a nation, we must decide definitively whether we believe in God and godly principles. We must decide whether we revere the Bible and what it means when our elected officials take their oaths of office with one hand upon it. If we do nothing, we allow by default the elimination of God as a central figure in our culture.

As secular progressives try to remove all vestiges of God from our society, let us remember the godly principles of loving our fellow man, caring about our neighborhoods, developing our God-given talents to the utmost so that we become valuable to the people around us, and maintaining high principles that govern our lives. Our Judeo-Christian values led this nation to the pinnacle of the world in record time. If we embrace them, they will keep us there.

While we Americans are giving a cold shoulder to our religious heritage, the Russians are warming to religion. The Russians seem to be gaining prestige and influence throughout the world as we are losing ours. I wonder whether there is a correlation.

There are many well-documented stories about God's intervention on behalf of our country during the War of Independence, but one of my favorites involves the Constitutional Convention in 1787. The delegates could not reach consensus on how the Constitution should be written, and the rancor threatened to destroy the fledgling union.

Benjamin Franklin, who was 81 years old, stood before the entire assembly and reminded them of their frequent prayers during the war against Great Britain. At his suggestion, they knelt and prayed -- and then went on to put together a 16-page document known as the Constitution of the United States, one of the most admired documents in history. From that point forward, congressional sessions were started with prayer.

Second Chronicles 7:14 says, "If my people, which are called by my name, shall humble themselves and pray, and seek my face and turn from their wicked ways, then I will hear from heaven, and I will forgive their sins and will heal their land."

These instructions are clear, and secular progressives will shun them. They may control much of the media, but we should not allow them to control our beliefs.