Listen to Trump About Ukraine Before It's Too Late

Douglas MacKinnon  |  Sep 30, 2022
The opinions expressed by columnists are their own and do not necessarily represent the views of Townhall.com.
Top Columns
Trending on Townhall Media 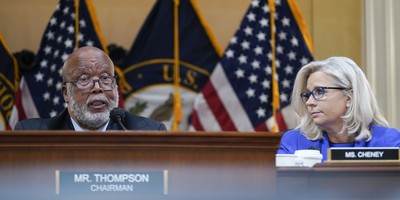 During an appearance on 77 WABC radio, former President Donald J. Trump was asked by host John Catsimatidis what things “keep you up at night.”

The former President quickly answered: “I think more than anything else, I think we could end up in World War III and it could be all of the horrible things that took place in Ukraine,”

A growing number of people believe Trump is correct in his chilling assessment.  The question then becomes: How did we ever get to such an increasingly surreal and dangerous position?

A few weeks after Russia invaded Ukraine, simply asking questions about alleged corruption in the country; off-shore bank accounts; fake news being disseminated by the Ukrainian leadership; flawed military strategies; billions of U.S. taxpayer dollars disappearing; if regime change in Russia was the ultimate goal with Ukraine being used as a proxy; and that increased likelihood of triggering a nuclear war became akin to daring to question the lockdowns, masks, and vaccine mandates.

Suddenly, asking logical and critically important questions made you a pariah to be shunned by those announcing themselves to be on the side of “Goodness and Light.”

Lockdown the working-class; get your shot; display the Ukrainian flag on your Facebook page; and…shut-up.

As a conservative, I was honestly shocked at how many Republicans and conservatives were suddenly cheerleading the Ukrainian military and that country’s people to march into the teeth of the Russian war machine.

Seven months ago in a major paper in Europe I asked what the upside could be for the innocent men, women, and children of Ukraine after embarking upon such a strategy.  How is Ukraine losing the lives of thousands of its citizens while watching much of its infrastructure turned into rubble, and sections of its country annexed by Russia, beneficial to the people of that country?

Would it have made more sense to agree to an immediate ceasefire - no matter how unfair the terms may have seemed at the time - and then let almost every nation on Earth come to Ukraine’s defense via negotiations, sanctions, and other effective pressure points?

Then, as those negotiations were going on, allow calmer and unbiased heads to take a deeper dive into the backgrounds of the Ukrainian leadership; several of its military units; how we would achieve strict accountability for U.S. taxpayer money going into the country as aid; and…the country’s alleged suspicious connections to the Biden family.

None of that happened and today we find ourselves inching closer and closer to an actual nuclear missile exchange or all-out war.  In our now, Alice in Wonderland upside down world, it’s as if no world leader or political, military, or intelligence “expert” is willing to even acknowledge that increasing possibility.  As one hubris-created miscalculation leads to the next, literal Hell on earth is just around the corner.

For those who are not students of history or don’t believe such calamity is possible, I would suggest you look up World War I; the chain of seemingly insignificant miscalculations and events which lead to the “Great War;” and the 21,000,000 dead as a result of those particular trip-wires being stepped upon.

Clearly Vladimir Putin has much to answer for regarding the invasion of Ukraine.  That said, there is a growing concern among some that he – along with his Generals, several of whom are thought to be “Trigger-Happy” – are being forced into a corner where at least in their now very troubled minds, they may have but one escape option.  That option being to introduce – at the minimum – tactical nuclear weapons into the field of battle.  An area in which some in the Russian military have menacingly stated could now include parts of Europe and London.

Again, other than former President Trump and a few others outside of our and Europe’s chain of command, is anyone in a position to turn down the flames of rhetoric and war even entertaining the possibility that Putin and his Generals may not be bluffing?

Shockingly, instead of turning down the flame to at least simmer, it has seemingly been dialed up with the now alleged sabotage of the Nord Stream pipelines.  Pipelines both President Biden and his hyper-partisan State Department official Victoria Nuland seem to have deeply shaded in the past.

In February, Biden said that, if Russia invades Ukraine, “there will be no longer a Nord Stream 2. We will bring an end to it.”

And one month before that, Nuland stated: “If Russia invades Ukraine, one way or another, Nord Stream 2 will not move forward.”

She already has a very curious history with Ukraine, so it might make sense to take her at her word on that subject.

No matter what happened and who is responsible if it indeed was sabotage, there are assumedly some in leadership positions in Russia who feel they were just shoved deeper into an all but inescapable corner.

The powers that be are certainly in their right to hold Putin accountable.  That acknowledged, engaging disturbed minds in games of “Chicken” with nuclear weapons on the playing field might turn out to be the last misjudgment for a century or more.

Douglas MacKinnon is a former White House and Pentagon official and author of the book: The 56 – Liberty Lessons from those who risked all to sign The Declaration of Independence – Before they and the 4thof July are Banned.