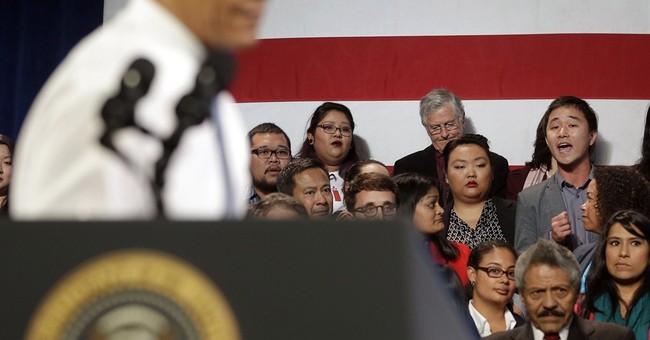 Welcome to the upside-down world of the rule of law and the immigration policy of the United States of America.

A just-published, prominently featured article in the Washington Post highlighted the fact that Barack Obama is now falling out of favor with Hispanic-Americans because he continues to deport illegal aliens who broke the laws of our nation.

What's next? Dictators and terrorists will take issue with Obama because he's destabilizing the Middle East faster than they can capitalize on his misguided policies?

Ironically, it's the "pro-illegal immigration" lobby that many in the entrenched establishment of the Republican Party now seem to want to champion. Where's a law-abiding American to turn when both parties shamelessly troll for the lawbreaker vote?

During the 2012 presidential election, 71% of Hispanic-American voters supported Obama over Mitt Romney. They are now having buyer's remorse because they believe he is stabbing them in the back by doing his job as a responsible American and president. They should cut him some slack and take him at his word when he stresses that he is not acting in the best interest of our nation.

As reported by the Post, Obama tried to instantly backpedal by explaining that he was powerless under federal law to stop the deportations. And then our "commander in chief" embarrassingly proclaimed, "I am the champion in chief of comprehensive immigration reform."

The president was so taken with his "champion in chief" line that he promptly posted it on Twitter. How far it seems we have fallen from one young Democrat president to another: John F. Kennedy had "Profiles in Courage," Barack Obama has "Champion in Chief."

Clearly, whichever Democrat gets the nomination to try and succeed Obama, be that Hillary Clinton, Martin O'Malley or someone else, she or he is already a lost cause if you happen to believe the U.S. should have sovereign borders and entry laws.

For the growing number of Republicans jockeying for the 2016 nomination, it might be wise for them to keep in mind that a strategy to appease the "pro-illegal immigration" lobby is a loser and will backfire.

First, because this shameless strategy is a direct slap in the face to the millions of Hispanic-Americans who entered our country legally and then proudly became citizens. In one way or another, I have worked in the Hispanic-American community for over two decades, and no one is tougher on illegal immigration than these legal immigrants.

What's more, they vote. Unlike the fantasy vote being chased by some of the Republican "leadership," the millions of legal Hispanic-Americans are willing to stand up and be counted if they are given the respect they have so responsibly earned.

This pandering for votes from both sides is also an insult to the millions of legal immigrants to our nation from countries all over the world. Be they from Russia, Korea, India, Europe, the Middle East or Indonesia, they also proudly stood in line, did all our government asked of them to enter our nation and become citizens, and also feel slighted by a policy that rewards lawbreakers.

Why have borders? Why have laws? Why have a country? Are there any leaders out there who still believe in the rule of law?