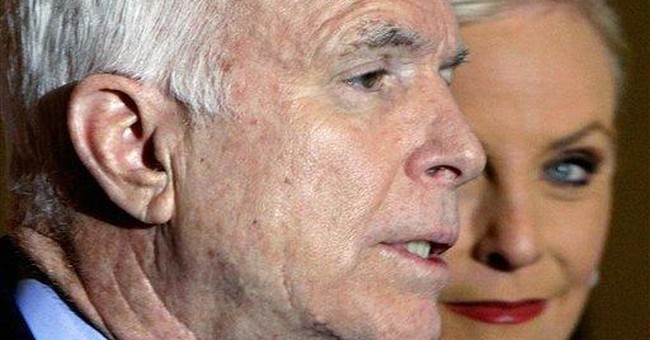 As with small children, many of the entrenched, beholden, or power-hungry hierarchy of the Republican party, simply wish conservatives could be seen, but never heard.

In a very telling headline, The Washington Times recently reported, “McCain Refuses to Pander.” In the first paragraph of the article, the paper said, “John McCain's campaign manager yesterday said the candidate will not pander for conservative support…” Yeah, we know. Message received.

For those conservatives or talk radio hosts who still don’t get it, or who are still not prepared to compromise their principles for the party, then some elder statesmen have some names they’d like to call you. Chase Untermeyer, the former high level official for Ronald Reagan, George H.W. Bush, and the current president, said in a recent column, “At both the national and local levels, there are those who declare that certain Republican elected officials are insufficiently conservative and must be purged. Senator John McCain is getting the worst of these blasts right now, with some self-appointed tribunes of Reagan’s legacy saying they might even prefer Senators Hillary Clinton and Barack Obama – scarcely followers of the Gipper – to McCain.”

For those conservatives who admire President Reagan but would dare question the record of McCain, Mr. Untermeyer, labeled each a “SQUIRREL.” As in “Snarky Quibbler who Undermines and Ignores Ronald Reagan’s Enduring Legacy.”

“Snarky.” I guess if you went to Harvard, called yourself “Chase” instead of Charles, and mingled with the elites of the world, then “Snarky” is a name you might assign to conservatives who have an honest disagreement with John McCain. If you’re someone like me, who grew up in poverty, barely got an education, and never met an Ivory Tower elite worth a warm bucket of spit, then you might substitute the word “ethical” for snarky.

When I first came to Washington, I had the honor to work in the White House as a low-level writer for Ronald Reagan. While certainly lacking the pedigree of Mr. Untermeyer, I did share one or two special moments with that President. In a conversation that Peggy Noonan was kind enough to chronicle in her bestselling book entitled “When Character Was King,” President Reagan and I spoke in the Oval Office about the alcoholism of our fathers, poverty, and the cruelty of life. It was actually because of Ronald Reagan’s wisdom, kindness, and suggestion, that I was able to reach out to my estranged father.

Understanding that, I’m more than proud to plead guilty to using Ronald Reagan as the template for true conservatism. As such, I just don’t think there is any way that anyone can accurately equate Reagan’s conservative legacy with McCain’s moderate voting record. Does saying that make me a bad person? Am I now an Untermeyer “Squirrel?”

John McCain is a good person. I do believe he has the best interests of our nation at heart. That said, as an American, it’s my right to disagree with him on substance. John McCain heroically fought and sacrificed to give me that right, and for that, I am forever grateful. On issues such as immigration, taxes, judges, global warming, drilling in Anwar, and the detention and prosecution of enemy combatants, I take issue with some of his past comments, votes, or current positions.

Unfortunately, the message I’m getting from the Republican establishment is that conservatives should bite their tongues, do their duty, and await the crumbs that may come their way in a McCain administration. Is that what it’s come to? Party loyalty before principle?

In his endorsement, the former president also said, “…I believe now is the time for me to help John in his effort to start building the broad-based coalition it will take for our conservative values to carry the White House this fall.”

Like Untermeyer, former President Bush questioned those on the right who question McCain. He called such criticism “grossly unfair” and an “unfair attack.”

If some in the party succeed in quashing the conservative voice, then they will have silenced the conscience of America. Surely, John McCain will stand shoulder to shoulder with conservatives to prevent such an outcome.

Here's Why You Haven't Heard About the CDC's Collusion with Teachers' Unions To Keep Schools Closed
Matt Vespa
Squad Members Attack Israel As Hamas Rockets Rain Down, Because of Course
Spencer Brown