Who Will David Letterman Hate Next? 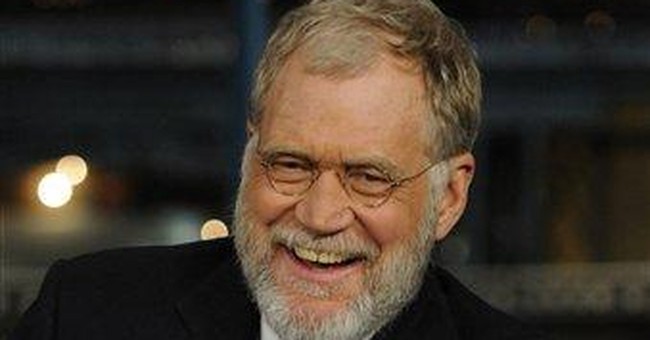 “Hate her!” So said actress and liberal activist Susan Sarandon a few years ago about fellow liberal Hillary Clinton.

A well-known self-described liberal Democrat in Hollywood once said that the thing that bothered him most about some of his fellow liberals was their “hate.” It’s not enough, he said, “that they disagree with Republicans and conservatives, but they have to hate them and hate everything they stand for.”

Over the last seven years, a large number of these liberal activists, actors, and entertainers, have professed their outright hatred of George W. Bush. Through their rants in columns, in books, and on television and radio, they have spewed varying degrees of unhinged loathing of this president. Chief among these “haters,” is late night talk show host, David Letterman.

In discussions I’ve had with people in the industry, Letterman has oftentimes been described as “quirky,” “eccentric,” or “bizarre.” When I served as former Senator Bob Dole’s press secretary, I got to see some of this strange behavior up close and personal.

Like all of these shows, “Late Show with David Letterman,” has a “green room.” That being the room they park the guests before and after they make their appearance on the program.

During this particular taping, both Bob and Elizabeth Dole were going to be on the show – a show in which I got to write part of the “Top Ten” list. This came about because the “Late Show” writers had written a few jokes that offended both Doles, so the producer replaced the objectionable material with several “Top Ten” lines I had drafted earlier in the day – just in case.

The segment between the Doles and Letterman went very well. Letterman was warm, respectful, engaging, attentive, and funny. It was after the segment, and after the taping of the show, that we got to witness some of the “quirkiness.”

After the program – which is taped from 5:30 to approximately 6:30 PM – Letterman and his staff have to do “post-production” to get it ready for the 11:35 PM airing. At least at that time, to go to post-production, Letterman had to walk from the stage and go past the green room to head upstairs to fine tune the show.

During that particular taping, actor Joaquin Phoenix – an incredibly polite, gifted, and down-to-earth person – was also a guest. Soon after the program wrapped, those on the program and staff or representatives, were milling about inside or just outside of the green room. As we did this, a staffer for “Late Show” suddenly walked from the stage to the area of the green room and breathlessly announced that we would all have to get inside the green room and close the door behind us. When I asked why, I was told, “Dave does not like to be seen or touched by the guests or their staff when he exits the stage.” Okay.

Does such curious conduct help to explain Letterman’s non-stop Bush bashing? Does Letterman somehow harbor an unexpressed guilt in his subconscious of such magnitude for not serving in Vietnam, that he punishes himself in the guise of the same-age President Bush? Is he yet another, self-hating entertainer bouncing from the couch to the camera? Whatever the answer, Bush has clearly become the de-facto therapist for Letterman.

Unfortunately, aside from the almost nightly invective hurled at Bush, Letterman – like most liberals in the media spotlight – seems to attach his hatred of Bush to that which he holds the president responsible. One such issue being the war in Iraq.

In now a famous “You Tube” moment, Bill O’Reilly of the Fox News Channel, went on Letterman to be the recipient of the host’s rude and sophomoric antics. As the segment shifted into high gear, O’Reilly asked Letterman a pointed and direct question: “Do you want the United States to win in Iraq?”

To the surprise of no one but his sycophants, Letterman could not or would not answer the question. When pressed by O’Reilly to answer, the best he could do was to play to his mostly left-leaning audience for cheap debating points and say, “It’s not easy for me because I’m thoughtful.”

In another telling exchange with O’Reilly, Letterman told him, “…I have the feeling about sixty percent of what you say is crap.” O’Reilly came back with, “Well, you’re going to have to give me an example if you’re going to make those claims.”

Of course, the “thoughtful” Letterman had no examples, saying, “Well, I don’t watch your show, so that would be impossible.” While I understand that ignorance and false accusations are the coin of the realm for many on the left, one would think that even Letterman had to be embarrassed by that answer.

No matter. George W. Bush will be president only until January 20, 2009. On January 21st, will Letterman and the other “haters,” then spontaneously admit the surge is working, our troops were right to believe in their mission, and that Islamic fundamentalists really do mean to exterminate our nation? Or, will they sink deeper into denial and depression as the object of their scorn moves on with his life without ever acknowledging their existence?

Hate. It fuels much of the left, frames their argument, and weakens our nation. That’s anything but entertainment.