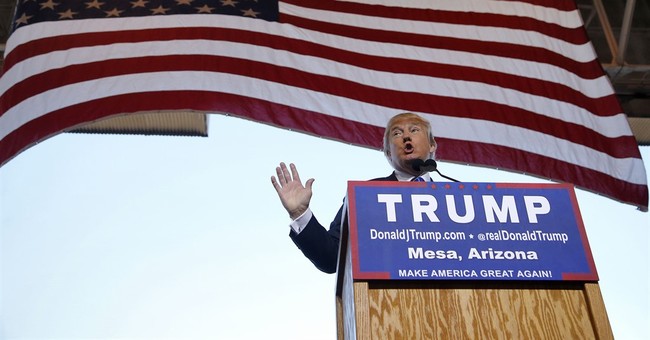 A couple of weeks ago, before a “moderate Muslim” couple lit up San Bernardino, a duo, by the way, that BHO’s boys “vetted” to immigrate into the US, I read a column telling Christians not to vote for Trump should he win the GOP ticket because he didn’t pass the “Word of God” litmus test.

He also pointed out that Trump was cocky, cheeky and braggadocious and that, my dear brethren, was why he counseled you to not play the Trump card in 2016.

The author went on to say that we needed a “statesman” like Winston Churchill which made me spew my coffee on my Mac Powerbook.

Now … before anyone thinks I’m anti-WC, allow me to allay any concerns because I’m a huge Churchill fan and a painting I did of Winston adorns my gorgeous Texas casa.

The thing that struck me as weird after said columnist trounced on Trump for his arrogance, insults and his blistering quips was the Captain Obvious fact that I know of no one on the planet who was more adept and acerbic in their verbal cut-downs of his political opponents then my curmudgeony hero, Sir Winston Churchill.

Matter of fact, Churchill makes Trump look sedate and sophomoric compared to the way the British bulldog wielded his wicked verbal sword. If you don’t believe me give The Wicked Wit Of Winston Churchill a cursory glance.

In the aforementioned slim tome, you’ll quickly get schooled that the colossal PM, who crushed Nazis like a narc at a biker party, was also a man who had a LOL sense of humor. Much of it was devilish. And God help you if he pointed his verbal guns at you.

However, a lot of Winston’s mischievous verbal invectives are lost in his historical/famous sayings, but true Churchill enthusiasts know he was the King Of Cut Downs, bons mots, jokes and aphorisms which were often parlayed at his opponents' expense. And his slams also included the ladies.

Yep, I know of no other modern “Statesman” like Churchill who was a combination of a great heart, brilliant talent, political savvy, who was wildly funny and definitely conceited.

Back to the Biblical acid test for our conservative candidate.

Look, I’m a Christian. I know it’s not cool to say or be that any longer but … I am.

That said, I’d love for some perfect critter to be elected as our next president and guide America into greatness, but sorry, folks … they … ain’t … out ... there.

Indeed, the last perfect leader to ever schlep this third rock from the sun was Jesus. And they ended up killing him.

Matter of fact, I don’t think most of Christendom’s hailed biblical protagonists would pass the evangelical muster if we held them to stringent scriptural standards that some Christians are applying to Trump.

For instance: would any evangelicals vote for…

-- King David knowing that he shagged Bathsheba (another man’s wife) and then had her husband offed? I doubt it. Can you imagine the field day CNN would have with that? Good Lawd!

-- What about Moses? Moses killed a man, married a black woman, and had massive anger issues. Can you say “deal breaker” for most evangelicals?

-- What if Samson were on the ticket? Samson dated a hooker, killed Cecil The Lion and had long hair. Can you imagine the melee that would ensue should some candidate have this Nazarite’s track record? OMG. Scandal aplenty for the fastidious among us. But … he was God’s choice and his Judge to lead an ancient Israel for a time.

-- What about Abraham? This old patriarch constantly lied about being married to his wife. Not. Very. Presidential.

Then you have Jesus’ fab twelve whom he chose to change the planet that were an amalgam of rough cussing fishermen who resembled the crew of Deadliest Catch or tax-cheats like Matthew. And don’t even get me started on John The Baptist who ate bugs and wore a camel skin.

And the list could go on and on regarding the massive unholy incongruities of fallen men, both redeemed and unredeemed, whom God utilized to shake and shape nations for his righteous purposes.

Oh, crap. What is wrong with me? I forgot about God’s favorite leader, the man Jesus Christ. I seriously doubt many would vote for him because he definitely was not politically correct. He roasted evil politicians, called them wicked names, and lambasted the religious right of his day and even called a woman a dog. Can you imagine what the coven on The View would do with that one?

Personally, I think Christians are groping to look for a good Christian candidate according to PC-Christendoms' neutered and totemic standards. I believe the last “good evangelical” candidate that evangelicals got giddy over was the squeaky clean Jimmy Carter. How’d that work out for you?

No, what I’m looking for is some quasi-decent SOB who loves our Constitution and our original intent.

Yes, I want a leader who can convince me that he reveres our founding docs, who’ll keep us secure, jack up our economy, plug our porous borders and bounce our enemies into a fiery hell. Call me a simple man. And if he or she doesn't perform according to what they promised us, I'll devote my pen to bring they're lyin' backside down.

Lastly, I'm a Cruz man but if it turns out that Trump is our only option this Christian will gladly vote for The Donald over the she-devil known as ... Hillary Clinton.