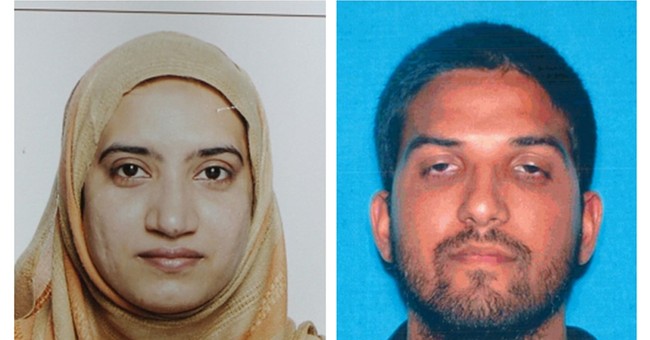 Trending
You know what’s ticking me off this morning?

1). The fact that fourteen innocent people were slaughtered at a Christmas party last week in San Bernardino by a Muslim terrorist and his satanic ISIS bride.

2). Obama and “The Media”, including some FOX News hosts, tripped over themselves trying to keep from calling this obvious act of terror, an obvious act of terror spawned by the Kings of Killing Unsuspecting Innocent People Around The World. I’m talkin’ about BHO’s favorite religion … the very ones he fawns over the most … namely, Islam.

Did you see the Islamapologist-In-Chief stutter and sputter over the religious roots of the terrorists? He sounded like Fonzie balking when he had to admit he was wrong.

I guarantee BHO & his oglers wouldn’t have been so slow in pointing out the culprits and their political/religious affiliation had the killer been a white, male, conservative, Christian named Whitey Whitebread from Crackertown, Kansas.

Oh, and by-the-way, spare me the “we had to be sure first” stuff. Stevie Wonder could see it was an act of war perpetrated by an Islamic operative.  Or, as Rudy Giuliani put it, ‘‘If You Can’t See This Is An Act of Terror … Then You’re A Moron.”

3). The Bigger-than-Dallas fact that a significant chunk of you-should-know-better-America, who've imbibed deeply on Obama’s, The Media’s and public education’s brainwashing techniques, are now happy, dippy citizens of The Nuevo United States Of Wussification.

CARTOONS | Tom Stiglich
View Cartoon
Yep, via political correctness, a big slab of the general public will no longer call a spade a spade or an Islamic terrorist an Islamic terrorist.  Instead, we’ll happily put on a welder’s mask and a ten-year-old little girl’s sun dress and curtsy to crud we should be flying the finger at while sending them a barrage of hell-fire missiles.

So, why do many fear stating the obvious when it comes to Islam?

Well … it’s principally because we’ve been trained by the aforementioned to dread being labeled a xenophobe.

Matter of fact, it’s this self-same thing that contributed to the deaths of those poor folks, including a father of six, in San Bernardino.

Yep, this ridiculous, anti-American, anti-commonsense, anti-humanity, self-deceptive PC-funk paved the way for Syed and his murderous wench to kill and wound dozens, in America, during a Christmas celebration.

Do you think I’m off a skoche in my assessment?  Yes? Well, smoke on this.

According to Syed Farook’s stupid neighbors, they saw what this murderous “moderate” Muslim and his Bride Of Frankenstein were doing but they were “afraid” of being labeled a “racial profiler”.  This unrighteous fear, foisted on us by the Leftist Thought Police, allowed the Muslim terrorist to light up dozens of unsuspecting citizens.

I believe when historians write us up in a few decades, if our nation loses our former glory, it’ll be traced back to when we traded in plain speaking for kissing our enemy’s ass.

Here's my dire prediction: The San Bernardino slaughter will not wake us up until we experience, via the hands of adherents of the “Religion Of Peace”, an atrocity that makes 9/11 look like little league baseball. I believe a lot of America, via political correctness, has become dumb and numb to our immediate Islamic threat and it is this that will allow them to smack us hard.

And I mean real hard.