If Carly is 'Ugly' Then What Is Whoopi? 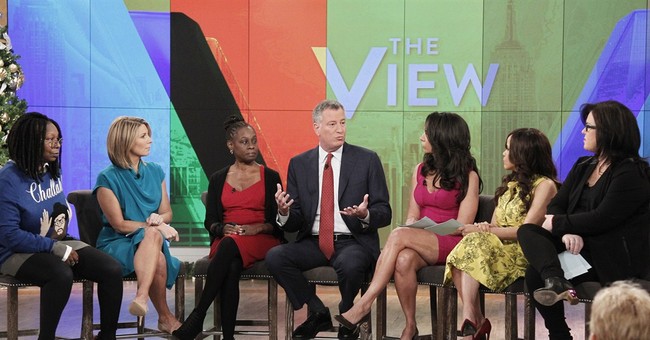 Trending
After the last GOP debate, the "women" of The View pulled out their dragon-nails and said that Carly Fiorina looked "demented" and her face was worthy of a Halloween mask.

Holy crap, ladies. That was mean. Did you guys have Angry Soup for lunch, or what?

As a writer, I’ve been taught/pummeled for the last four-and-a-half Olympics, by the liberal thought police, that such personal digs were verboten when discussing politicians in public. Especially, female Democratic politicians. And triple, especially, are such insults frowned upon if you’re a white, conservative male and you’re the one jackhammering some evil liberal strudelhun.

Yep, my liberal critics have always sprayed me down with Windex every time I even thought about launching a verbal invective at some satanic beastess who dwells on the left side of the political aisle. Bad Doug. Bad, bad Doug.

So, naturally, I was confused when the coven of The View let loose on our fair lady, Carly.

I thought you dames prided yourselves in being in the feminist business of sticking up for the ladies? Did I miss something? Have the rules now changed and we can all, once again, go bare-knuckles and say whatever comes to mind about whomever and not give a flying rat’s backside how crude, rude and socially unacceptable it is?

Please tell me yes, because this playing nice stuff is driving me nuts. Do you know how many cats I have to find to kick every day just to release the rage that I have, but cannot express in a column or during an interview, just because of your stupid rules of etiquette? Well, let me tell you: It’s a lot and it’s getting old. Plus it’s getting increasingly hard for me to kick cats given all the Sarah McLachlan songs and commercials. Anyway…
CARTOONS | AF Branco
View Cartoon

Not that I’m a big fan of The View, but I never remember you dudes saying anything nasty about the ubiquitous, homely ladies on the Left. I’ve never heard them say that Hillary looks like Jeff Daniels in drag. Also, I’ve never heard them bet over who has more body hair; Michelle Obama or Justin Bieber. But, OMG … will they go off on Carly, or Sarah Palin or any of our other conservative politicians who sport lady body-parts.

Y’know, I would get the hens of The View going for the personal digs on accomplished conservative women if the show were called The Spew and the hosts were vapid, red-hot, teen-aged, supermodels, who’re more shallow than Perez Hilton and didn’t posit themselves as erudite sages regarding all things political. But they aren’t and they don’t and ergo, I think for them to play dirty pool with our girls is both dirty and duplicitous.

Lastly, and please forgive me, but who the heck are Whoopi and Joy Behar to rip on any lady’s looks? Do Goldberg and her hunter-orange-headed, unfunny friend not have any mirrors? Good Lawd, girls. Talk about the putz calling kettle black.