10 Reasons Why I Could Never Be The Pope 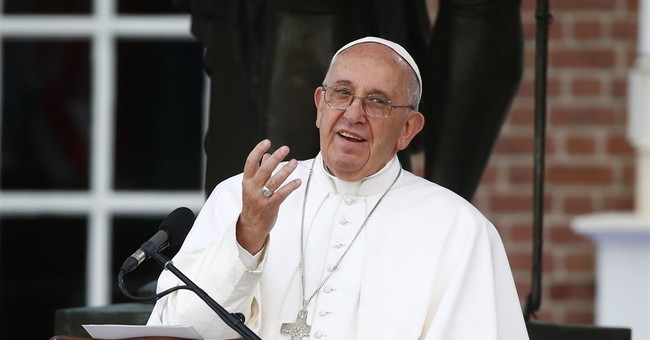 Trending
I'm glad, for many reasons, that Boehner resigned his speakership last Friday. Chief amongst them was … I'm tapped out on all the Pope coverage.

Yep, I hate to confess this but, I’m tired of hearing about the Pope. No offense to Francis, of course. He seems like an affable old gent. But alas … I’m Pope weary.

I bet even Pope Francis was sick of that grueling parade. I imagine he’s ready to hammer back some dirty martinis, light up a cigar from his SafariCigar.com collection and invite his closest bros and nuns over to hang out at his swank villa in Tuscany.

I know I would if I had to do a brutal week listening to Boehner sob like Jimmy Swaggart while simultaneously having to grin and bear several soirées with Obama and Michelle. If that were me I’d be texting up Willie Nelson and asking him if I could hang at his ranch for at least a month. Oh, BTW, my sources in D.C. tell me The Pope was overheard humming Van Halen’s classic, "Running With The Devil", while he was riding in the limo with the Obamas. It’s true. Tell everyone.

My problem with the pontiff was three-fold: 1) I’m not a South American socialist; 2) I’m a Calvinist and …; 3) It was a tad boring.

For moi, those who’re supposed heralds of The Greatest Story Ever Told should not put their audience in a full on coma when they communicate The Good News. Yes, I believe there should be an 11th Commandment, namely, Thou Shall Not Bore.
CARTOONS | Steve Breen
View Cartoon

From a style standpoint, call me shallow, but if I were Pope, I’d spice it up a bit. Check it out…


But that’s just me, and of course, I could never become the Pope because ...