If I Were Gay, I’d Oppose Houston’s Old Lesbian Mayor 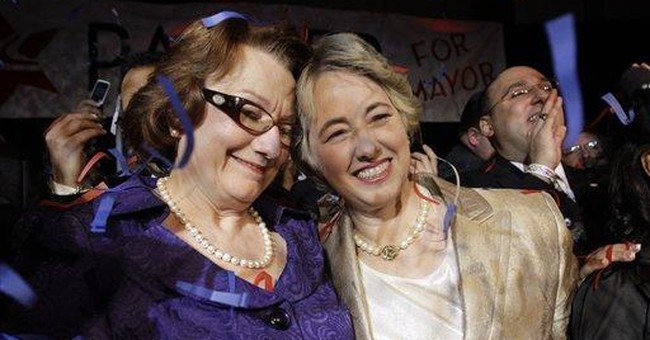 I’m not gay. I get called gay all the time by Leftists who seek to disparage me when they’ve run out of their specious, illogical arguments and the full weight of common sense lands on their fetid heads and they have no other recourse but to go ad hominem on me and say, “he must be gay.” Which, like I said, I take they equate with a cut down; which is weird because, supposedly, they’re the homosexual’s champion.

For what it’s worth, the only gay thing about me is, and I must confess, I did tear up a bit during American Idol when Rion Paige sang Blown Away. But that’s the extent of it. Well, not really. For full disclosure, I felt exceedingly gay, in the classic sense of the word, when I shot a brown bear that squared ten-feet, in Prince William Sound, back in 2010, with my Mauser ’98 chambered for the vicious .375H&H Magnum. Boom. (Here’s the video if you’d like to check it out.)

That said, if I were gay I wouldn’t give a flip if pastors spoke against my particular penchant -- like Houston’s old lesbian mayor has been doing – because I cherish this thing called “liberty”. Yep, as a hypothetical gay dude I would still embrace freedom of speech and not get my neckerchief in a wad because some Southern Baptist doesn’t like my checking Jethro’s oil.

Indeed, as an imaginary gay man I’d still embrace the First Amendment and would fight my gay backside off for others' right to say and do whatever, just as long as I didn’t have to pay for it and I could ridicule the crap out of it.

Hey, lady … if you didn’t know this it’s the pastor’s job to teach the Bible and it’s also their right. And, by the way, it was a Judeo-Christian worldview that framed this amazing nation that you’re currently whizzing on by trying to mitigate several pastors’ freedom of speech.

Dear Ms. Mayor, just like it’s your right to quote Madonna, make fun of Baptists, dress like Chris Farley, sound like Borat’s sister, binge on golf shirts and cut your hair like Huey Lewis, it is also the pastor’s right to say that God thinks you’re a bubble-off-level. Suck it up.

I don’t know about you, folks, but I like a world where such freedom exists because, as Mark Twain put it, “it’s the difference of opinion that makes a horse-race.” All of us should cherish and protect such liberty because it's this freedom that sets us apart from such clowns as ISIS. Speaking of Islam, if Houston’s old lesbian mayor wants to get pissy, she should focus her radical-feminist-lesbian rage at Islam because, unlike the Christians who graciously would like to convert her, Islam, on the other hand, would like to kill her.