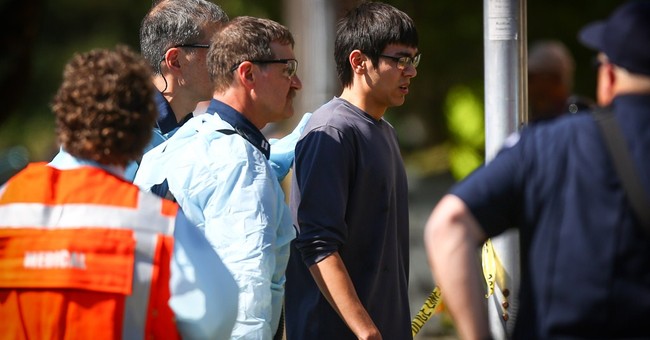 Last Thursday, another loon (like Elliot Rodger) opened fire with a shotgun on students at Seattle Pacific University, killing one and wounding three others.

It could have been a veritable bloodbath as the culprit, Aaron Ybarra, intended, according to law enforcement, to “unleash hell” on the campus; but a quick thinking, non-wussified young man rose to the occasion and peppered sprayed this SOB when he was reloading and brought him down to Chinatown.

I’ve got two words for that brave move by that fine young squire: Ya and Hoo.

Check it out Daily Mail:

A 26-year-old gunman has opened fire at a small, Christian university in Seattle – killing one student and wounding three more with shotgun blasts.

And police say he could have killed others if it wasn’t for the actions of one heroic student who pepper sprayed the gunman and tackled him to the ground.

Students at Seattle Pacific University say Jon Meis saved countless lives when he sprang into action as the shooter stopped to reload his weapon Thursday afternoon.

Meis, a 26-year-old engineering student, is engaged to be married and has ‘everything to live for’ friends said. But he risked his life and ended the murderous rampage.

‘I’m proud of the selfless actions that my roommate, Jon Meis, showed today taking down the shooter. He is a hero,’ tweeted Matt Garcia.

Classmate Briana Clarke told the Seattle Times that Meis, who was on duty as a hall monitor, sprayed the attacker in the face, grabbed him around the neck and then wrestled him to the ground.

Yep, instead of rolling up in the fetal position and wetting his big victim diaper, Jon Meis did what normal young men used to do, namely, kick the bad guy’s butt by any means possible. Someone buy that man a beer.

Now, for all the criticism of “alpha males” and how men nowadays need to be more like Michael Jackson and less like Leonidas, I bet the kids and faculty at SPU, and their respective relatives, are sure as shizzle glad this Meis hombre tapped his primal, protective impulses when the crap was hitting the fan and saved the day.

Gentlemen, should you ever find yourself in a sticky situation in close proximity to an active shooter, as Mr. Meis did, put this in the back of your noggin; it might save a few lives:

1. Obviously, get out of the shooter’s line of sight. I know … duh. Stay safe, assess the situation and try to maneuver from behind.

2. Be willing to sacrifice self to save others. That’s what Meis did and it worked. Jon had no guarantees he was going to come out of that altercation alive, but he ponied up anyway and it worked, saving God-knows how many lives.

In that kind of crap storm, calling the cops only allows el Douche the time to reload and keep mowing down the innocent. Aggressive action is the cure for the active shooter. Take the bastard out. Bull rush him. Yes, you might die but you also might save a lot of innocent lives. That’s the gamble of the hero.

3. Have a weapon at your disposal. Granted, a gun in the hand of a good guy would have really helped, but Meir used what he had and the pepper spray worked effectively on the perpetrator. If for some reason you don’t have a deterrent on you, get creative and use what you have at hand like a laptop, or a heavy book bag or a frickin’ chair. Or if you’re eating Chinese food ram some chopsticks into the dipstick’s eardrum and pierce his empty head.

4. If you have the good fortune that your first strike worked and you’ve incapacitated the moron, don’t stop and admire your lucky strike. Do what King David did to Goliath and cut his head off. Or, if that’s too much, choke him out.

5. Don’t be greedy with your heroic act -- invite others to join the melee as Jon did and dog pile the dude. Have fun. The more the merrier, eh?

I’m convinced many of these massacres could have ended with a lot less casualties if we all did a little mental prep and a little physical training, because I am convinced that these losers aren’t the Rambo’s they think themselves to be.

Great job, Jon Meis. If someone could get me his address I’d love to send him a box of my world-class Safari Cigars.