Zimmerman Trial: How to Make it Easy for People to Say, ‘You’re an Innocent Child’ When in Reality… 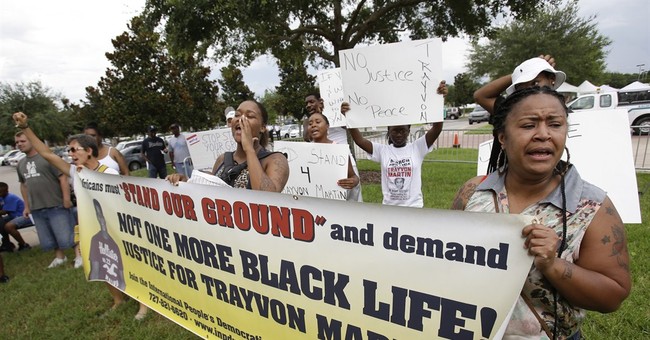 If you’re in your late teens and you get shot after assaulting a neighborhood-watch supervisor, and you want someone else to get blamed for your behavior, here are thirteen tips to make you look like an “innocent child” that loves Skittles, doing math and riding horses versus a gangbanger-in-waiting.

1. Don’t have pictures on social media, or on your cell phone, of you holding guns like a gangsta. If you do take pictures with firearms, make certain the weapon is held properly, away from the camera, with your finger off the trigger and it does not give off the I'm-a-criminal-in-training vibe. Just a thought.

2. Don't have multiple pictures of you inhaling weed floating around on either social media or in your cell phone where the police can retrieve them and use them against you. This, too, hampers the "innocent child" motif.

3. Also, when you do flip off the camera, go with the one-hand F-you, rather than the double finger fongool. The double-finger F-you is too over the top. One F-you should suffice as it’ll show that you are a gentleman that has restraint and are an innocent soul, almost … child like.

Indeed, the one-finger F-you can easily be explained as innocuous, childhood banter between chums. For example, “Hi, do you want to play? No? Okay, F-you. Have a good day, talk to you later”. See?

The double F-you is harder to explain away as it gives more of an “F-off and die”, adultish message via the two foul hand gestures which definitely are not childlike. Just pray about it and see what Jesus says.

4. Don’t call a neighborhood-watch volunteer a “creepy-ass cracker” just before you assault him. If you do call someone this racist term, make certain you do not say it to your friend who’s going to rat you out during a future cross examination in court.

5. While we’re on the topic of friends, be careful to establish credible friendships with young men and young women who don’t talk smack in court to lawyers, appear horrid on television, who can read cursive and they’re not … uh … um … inconsistent in their testimony.

6. Try to limit how many times you say, “motherf’er” on Twitter as it looks un-childlike when it’s thrust into the court of public opinion.

7. Also, don’t say the N-word all the time in your tweets. It’s considered rude and it could cost you a future cooking show, especially if you’re a white devil. See link above for examples.

8. Speaking of Twitter, don’t choose a handle like “NO_LIMIT_NIGGA” as it makes it difficult for the state’s attorneys in their prosecution, and for the media, to pawn you off as a mere lad that likes multi-colored, fruit flavored confectionaries and artificially flavored and sweetened canned teas.

10. While at school, try not to get suspended for spray painting the children’s lockers with “WTF”, especially if you have in your current possession stuff like twelve articles of stolen women’s jewelry and a big-ass screw driver used for breaking into homes.

11. Regarding cellular telephonic decorum, don’t take pictures of pot plants, illegal guns or talk about buying illicit .22 or .380 caliber handguns from your youthful mates. This, too, makes it hard for future defenders to explain away

12. While we’re on the topic of school, try not to bring your weed and weed pipe to school. If you do need to bring your hooch to school for your frequent panic attacks, or just to take the edge off the difficulties of the de rigueur of public education, try to conceal it better so you don’t get caught.

13. Also, as you go through your teens, you might want to think about not getting tattooed too much. In addition, I would forego the gold-capped teeth and get porcelain veneers if you are truly in need of cosmetic dental work.

Anyway, I hope this helps you should you ever end up in a predicament because of your poor choices and you’d like to have it blamed on others rather than you. Y’know, the media and race baiters can work miracles but the more you hide/alter your current, aberrant behaviors, the easier it will be to blame innocent people.