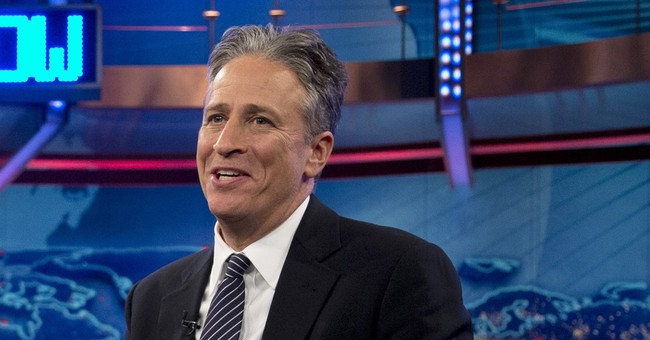 Grab some popcorn, folks. Pull up a chair. Get yourself a 6 pack. No … a 12pack and join with me and other liberty-minded folks as we watch the Left finally sink their comedic and inquisitive teeth into the rotted flesh of the Hope & Crap Machine that we’ve been caterwauling about for the last five, seems like twenty, years.

I don’t know about you guys but last week was a little gift from God as we got to see the Lame Stream Media get a modicum of game and finally call Obama and his ilk out on the carpet for their Benghazi Bullsmack, their egregious bullying of patriotic non-profits by the IRS and the Department of Just-Us’ tawdry hacking of the AP’s iPhones.

Chief amongst my joys during the previous seven days was watching John Stewart slam dance Obama, night after night, for BHO’s Eddie Haskellesque prevarications, his Clintonian verb parsing and his OJ-like blame-shifting.

The Daily Show’s host vehemently ripped into Obama, stating BHO and the IRS vindicated conspiracy theorists by purposefully hamstringing non-profit applications sought by freedom loving citizens. Stewart also hammered away at el Presidente‘ssupposedly “not knowing” about the IRS’ greasy tactics and the DOJ’s egregious 1st amendment breech “until he heard it on the news like we did.” Stewart said, “I wouldn’t be surprised if President Obama learned Osama bin Laden had been killed when he saw himself announce it on television.”

However, the crème de le crème was served on Wednesday night when John finally acknowledged that outfits like Fox News, who’ve been seriously miffed for many moons at Obama’s bullying tactics, were, after all, right and had every reason to be outraged.

Stewart, went on to compare Barack to disgraced former President Richard Nixon and/or Mr., Magoo. For those not hip to Mr. Magoo, he was a cartoon character who caused a lot of chaos because of his nearsightedness that was aggravated by his obstinate refusal to admit the problem. BTW, people and animals that had the misfortune to cross paths with Mr. Magoo usually left that encounter thinking he was a lunatic verses just being merely nearsighted. What’s that they say about “life imitating art?”

As Stewart acknowledged, conservatives and libertarians have been pointing out the obvious for a good long time, but last week the tide turned and now comedians, journalists and talk show hosts of the progressive persuasion are screaming, Whiskey … Tango … Foxtrot.

Heck, Mr. “Thrill-Up-My-Leg” Chris Matthews has seemingly lost his Obama buzz saying, in light of BHO’s worst week ever and his evident cover-ups, that, “President Obama obviously likes giving speeches more than he does running the executive branch … What part of the presidency does Obama like? He doesn’t like dealing with other politicians — that means his own cabinet, that means members of the congress, either party. He doesn’t particularly like the press…”

Holy crikey, Chris! You’re sounding like Hannity. Jesus must be coming back soon.

Yep, folks, it appears as if Obama’s crabbiness, condescension and his constant “it wasn’t me, man … I didn’t know” -- when he and his ilk are caught red-handed doing something sick -- is no longer ignorable even by those who cheerfully carried water for him.

This leaves me to believe this administration might want to put on a cup because it could now get really rough.