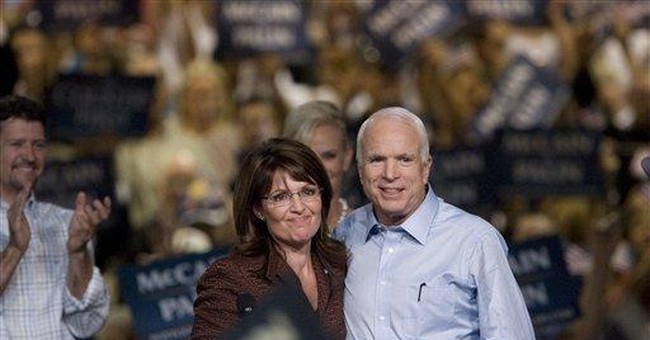 Y’know, there’s nothing worse than having a woman hand you your own testicles in a fight. And that’s exactly what Palin did to the Jobama ticket Wednesday night at the RNC. She verbally dismembered their party’s petty personal smears about her family, her “lack” of experience, and the flaming liberal’s vapid platform—and she did it in stilettos with a big grin on her face.

It was like watching a leopard bat around a gazelle just before eating it.

Now, before I go any further, let me go on record and say as the president of the Alpha Male Heterosexual Testosterone Fog Club that Sarah Palin is hotter than Georgia asphalt (and my wife doesn’t mind me saying that ‘cuz she too is muy caliente).

Yep, Palin not only appeals to my conservative roots but she’s not a butt ugly eyesore like the goggle-eyed, nerve grating, unfunny, chunky Marxist chicks the lunatic left jams in our faces. Yes, I am that shallow. But Jesus loves me anyway.

Let’s see, what else did I dig about Wednesday at the RNC? Oh yeah, the GOP has finally decided they’re not going to take the dem’s smack any longer and came out seriously swinging via Rudy and Palin at Jobama’s oh-so-lame record of achievement (cough).

Obama had better walk away from the experience digs on sweet Sarah because as a governor she trumps his Peter Pan record. Period. End of discussion. Biden, Dodd and Hillary agree with Palin when she said Obama ain’t got the moxie to be the Man.

Wasn’t it entertaining watching Rudy have too much fun at Jobama’s “experience” expense, his indecisive “present” senate voting record, and Obama’s only “gravitas” being his role as a community organizer? (which I believe is a code name for the chief of a socialist gulag.)

Yeah, it was sa-weet watching Palin refuse to play the “Oh, Beauregard, I do declare, I’m a damsel in distress” role. I feel very confident that Palin will be able to hold her own with Biden in the upcoming debates. Matter of fact, he’d better wear a cup and hope to God she doesn’t mention how obvious his micro mini-grafts are.

So, why do I like Palin besides her looks and Bulldog Attitude?

• She’s from a small town. I am pig sick of hearing the smarmy latte sippers dissing folks who don’t live in San Francisco. Viva la Smallville, where sanity is still alive and well! I say we all go out and buy a gun and a new Bible to celebrate!

• She’s a mama who can juggle work and family. Look, goofy libtard, if Bill Clinton could juggle five chicks and a mean wife, I believe Sarah Palin can manage five kids and a loving husband.

• She’s pro-life. And this is not just a political position but a very personal point for her: She put her down syndrome baby where her mouth is. Today it has become en vogue in our designer family milieu to off a special needs child if detected in the womb because that little bugger could ruin our family photos. Not Palin.

• She’s pro-gun. No double speak Barack blather coming out of Palin’s mouth about the 2nd amendment and the great sport of hunting. She’s a lifetime member of the NRA, a Ted Nugent Kill and Grill it girl. I get from her that if you don’t like her right to keep and bear arms or hunt, then you can kiss her moose.

• She’s pro-drilling. The only thing the libs will drill is your wallet.

• She’s a true blue Washington outsider and not a polluted Chicago politician.

• She's an equal opportunity offender. She has gone toe to toe with idiots on both sides of the aisle. To Palin, crap is crap no matter how you frame it.

Lastly, I thought you feminists dug accomplished women. Why the hatred, ladies? Do you like only the girls who are nasty, man hating, anti-American, pro-abortion lesbians who loathe this nation and that for which it stands? It sure seems that way.