College Presidents: How Many Students Have to Die Before You Allow Guns on Your Campus? 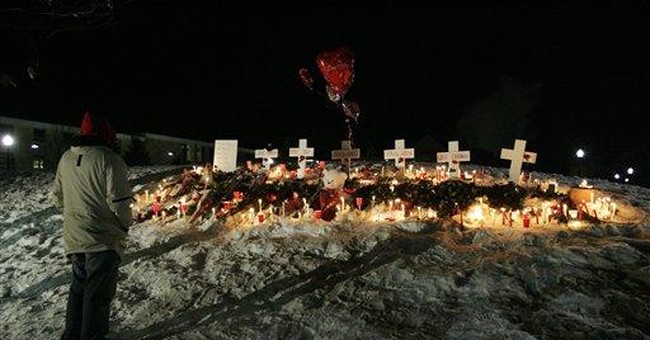 “Fear no man of any size, call on me and I’ll equalize.” —Common engraving on Frontier firearms

“Call me simple. Call me a redneck. Call me whatever the heck you wanna call me—but until we allow credible and licensed, proven and protective professors and students to carry a weapon (gun) on campus, we will see this murderous madness occur again and again and again.”

That paragraph was lifted from my April 21st, 2007 column from Townhall.com right after Cho Seung-Hui (or Seung-Hui Cho, however the heck you arrange his name) killed 32 students on Virginia Tech’s campus. Remember that?

As I easily predicted back in April 2007, here we are, less than a year later, being forced to watch (one more time) a bloody yet easily-remedied BS scenario from hades unfold upon our nation’s young people.

Last Thursday at Northern Illinois University, the now resident of hell, Stephen Kazmierczak, strolled into a class packed with 162 students and opened fire with a shotgun and three handguns, killing five students and wounding sixteen others and firing over 50 rounds before the toad killed himself (why can’t they start with suicide?).

The victims, Gayle Dubowski, 20, Catalina Garcia, 20, Julianna Gehant, 32, Ryanne Mace, 19, and Daniel Parmenter, 20, were accomplished students full of life, hopes and dreams that were cut down before they ever hit their stride. If that happened to one of my kids I would be gutted and extremely PO’ed that their campus had pretty much nothing in place to stop this kind of mayhem. No one was there to stop Kazmierczak. A prof or an “of age” licensed to carry student with a pistol probably could have.

The NIU slaughter—which was, by the way, one of 45 shootings (five this week) since 1996 that have occurred on campuses in the United States in “gun free zones”—will not be the last. The mass murderers among us have taken quite the shinin’ to shooting up our students at their schools. The principal reason is that it’s so easy for them to carry out their death wishes because university officials will not allow good guys with guns to carry in class and be an onsite deterrent to death-dealing dillweeds.

Hey, “all wise” college presidents and other admin wizards: Until you allow guns—real guns, guns that go bang and kill bad guys—you (to make it personal), your faculty and the students you’re responsible for will continue to be sitting ducks, potential fleshy sponges to soak up the hot lead from some pathetic loser’s happy trigger finger. The gun free stuff ain’t working.

I know what you’re thinking: “It’ll never happen at my school.” That’s probably the same smack the chiefs at the 45 schools and universities since ‘96 thought right before their students were perforated by bullets flying anywhere between 1200 – 2800 feet per second.

Now I’ll be the first to admit, I am not nearly as astute as the suits that head up our nation’s bastions of higher edumication, but as a simple man, I’m smart enough to know that you should never bring a knife to a gun fight, and if the mass murderers are using guns, maybe, just maybe, you guys ought to get one—or ten.

Listen, Dr. Numbnuts, all the talk you guys have been doing about proper precautions on campus, all the extra fat security cops you’ve recently employed with faster golf carts, shinier badges and long range pepper spray are no threat to a perp with a gun and the attitude to use it. A chunky butt security guard with a plastic dollar store badge and a 6-year-old can of mace on a golf cart is no help when the hellion shows up in your auditorium with a 12 gauge and three handguns.

Yes, if your foe has a gun, then he has a solid and deadly advantage, and the cops can’t get there fast enough to do much about it.

Yes sir/madam, when this type of stuff hits the fan your campus must have deadly force on the spot to counter deadly force. Duh. That is unless, of course, you’re cool with our kids being killed. I, However, am not. And as a parent of a college student I will go so far as to buy my daughter’s entire campus pistols for the guards, trained profs, and legal students if they will finally do the math and realize that putting guns in the hands of trained good guys is the only way to daunt murderous goons.