Doug Casey
|
Posted: Oct 04, 2018 12:01 AM
Share   Tweet
The opinions expressed by columnists are their own and do not necessarily represent the views of Townhall.com. 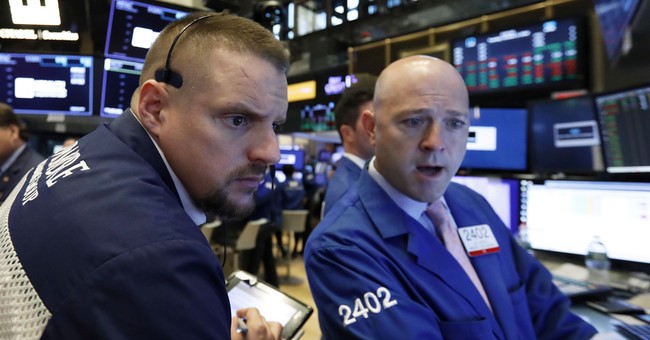 The U.S. economy is booming.

According to the government, U.S. GDP (gross domestic product)—a broad measure of economic growth—rose by 4.2% year-over-year. That’s the highest mark in four years. U.S. wages are growing at the fastest rate in nine years. Unemployment is at its lowest level in 18 years. And jobless claims are at a 48-year low.

This is great news for everyday Americans. That’s obvious. The question is… how much longer can the U.S. economy fire on all cylinders?

Justin Spittler: Doug, what are your thoughts on the economy? Is it as strong as the government says?

Doug Casey: Well, to start, I must admit that no one is more surprised than I am that things are holding together as well as they are.

I was convinced that zero percent interest rates and QE 1, 2, 3, and 4—the response to the meltdown that started in 2007—would bring on a disaster sooner, not later. They’ve caused people to borrow more and save less, which is a formula for poverty. But, so far, the most obvious result has mainly been booming stock, bond, and property markets. The rich have gotten a lot richer, while the middle class has slipped down only slowly.

But should you really trust the statistics that the U.S. government puts out? I don’t. At least not much more than anyone could trust Argentine statistics when the Kirchners were in office.

There’s always a political slant to the way these things are computed, and the way they’re presented.

Look at the so-called unemployment rate, currently 3.9 percent. That’s supposed to be an eighteen-year low. But the number of people working, as a percentage of the total population, is much lower than in the past.

There are numerous definitions of what constitutes employment and unemployment. And with over 50% of the population receiving direct government benefits of some type, all the numbers are flexible.

Justin Spittler: It sounds like you don’t trust these numbers or, at the very least, take them with a grain of salt. If so, how do you assess the economy’s strength? What sort of things do you look at?

Doug Casey: To be honest, like most people, I live in a bubble. We all live in our own little subcultures. We can’t really be sure what’s going on in the world at large. Most of us are just milder versions of Jim Carrey’s character in The Truman Show. We don’t know much beyond what we’re shown on TV, or read in various media. How reliable is that?

How reliable were the CIA’s statistics about the Soviet economy? They were less than worthless. How good were S&P’s credit ratings in 2007? Not very. How much does Tesla’s $300 stock price say about the company’s prospects? I’d say next to nothing.

Even when you talk to another person, what you hear has been filtered by their own psychology. Beyond that smiling face, underneath the social veneer, what’s the real story? Government statistics certainly can’t tell you…

But I look around. How many houses or buildings are being constructed? When I go to an airport, I pay attention to how busy it is. It seems nobody goes to shopping centers anymore, including me. Some years ago I’d hop a freight train to see how the other half lives. Now I hop a jet plane to see what’s happening on the other side of the globe. But I don’t kid myself—most input is anecdotal, transitory, and illusory.

That said, things are holding together. There aren’t mobs in the streets with torches and pitchforks. At least not yet.

Justin Spittler: And what is the glue? Is it the Federal Reserve’s easy-money policies?

Doug Casey: Absolutely. Monetary policy—how much money they print, how much credit they create, and how much it costs—isn’t just the elephant in the room. It’s the brontosaurus in the room.

And it’s gone into the real estate market. Nobody “needs” stocks and bonds. But everybody needs a dwelling of some type, and many Americans can’t afford one because a lot of that money has driven housing prices up a lot faster than wages. Believe it or not, there really are hobo jungles in 21st century America. There are lots of “homeless” living on the streets. We used to call them bums, although I think that term has become politically incorrect.

We’re still in the eye of the gigantic financial/economic hurricane we entered in 2007. The question is: When are we going into its trailing edge? Well, interestingly, the amount of debt in the world has expanded hugely since 2007, when financial institutions started failing. They failed because they had too much debt. Now there’s even more debt. There’s more automobile debt. There’s a lot more student loan debt. There’s more mortgage debt. More consumer debt. There’s much more government debt.

Doug Casey: Yes, much more corporate debt, too. Corporations have borrowed not to build new factories, but to buy back their stock. Why? One reason is to make management stock options valuable.

The whole situation is worse, and the timing is much more on the edge, than it was back then. Interestingly, the Federal Reserve is now trying to reel in all the money that it created at the height of the crisis, trying to normalize things. They’re trying to both raise interest rates and reduce the money supply. At the same time the government is running a trillion-dollar deficit. It can’t possibly end well.

The rich, especially in cities like New York and Washington, have gotten much richer in recent years. They stand much closer to the fire hydrants of money that the government’s created. They get to drink their fill before it trickles down to the little folks in flyover country. That’s one thing.

The other thing is that the Federal Reserve’s low interest-rate policy has made it much easier for people to service high levels of debt. This wouldn’t be possible if interest rates were normal.

I mean if you had to pay 8% to finance your new SUV you’re going to be much less likely to buy it than if you can finance it at 0% or 1%. It’s especially perverse in that people actually used to pay cash for cars, once upon a time. Then they financed them for two years. Then three. Now it can be for seven. Or they lease. So what was once a minor asset has become a major long-term liability. The whole U.S. economy is based on debt.

Justin Spittler: This obviously can’t go on forever, though.

Doug Casey: Right. This is all a moving paper fantasy that will come to a bad end. I see two ways it ends.

One, it will end with a credit collapse—all this debt is defaulted on. All that funny money that’s been created out of nowhere simply disappears. That can happen because today’s money is simply credit. It no longer represents a specific amount of gold. It’s merely an accounting fiction. We could easily have a catastrophic deflation. The remaining dollars would go up in value, for a while.

On the other hand, the government could succeed in keeping things together, by printing more money. But then we’ll have much higher levels of inflation. And that’s going to devastate the average guy more than anybody else.

Justin Spittler: And why is that?

Doug Casey: The average guy who gets ahead tries to produce more than he consumes, and save the difference. But his savings are dollars. If the dollars lose value rapidly, he might as well not have saved. That’s very destructive for the very fabric of society.

Justin Spittler: So I think we both can agree that the Fed has played a huge role in propping up the economy. But how much credit should the last two presidents get? As I’m sure you’re aware, Trump uses positive economic data to pat himself on the back.

But Obama recently did the same thing. He basically said, “Don’t forget that the economic recovery began under me.”

How much credit should either Trump or Obama get?

Obama should get zero credit. The economy collapsed under the disastrous Baby Bush regime. It recovered solely because of the huge infusion of credit from the Fed—which really just put off the inevitable. Apart from that, all of Obama’s actions were economically destructive.

In fact, Trump deserves some credit for things holding together. One of the most important things is his attempt to cut regulations. Another is his reduction in taxes. His limiting the tax deductibility of consumer interest and state income and property taxes took away indirect subsidies people were getting in high-tax places like California, New York, Illinois, and Massachusetts. On the negative side, he’s wasting hundreds of billions on the military. And could quite possibly start an international trade war.

I’m just afraid of what’s going to happen if things come apart in the next year. Since Trump is associated with capitalism, a collapse would be blamed on the free market. Then an overt socialist could easily be elected in 2020.

Justin Spittler: Why are you so concerned by that? What would be so different if things fell apart, say, two or three years from now?

Doug Casey: As much antagonism and actual hatred as there is against Trump, the economy is one thing he’s got going for him. If the economy really falls apart—and I believe it will—the political and social consequences in the U.S. will be extremely serious. The Democrats will try to impeach him.

All kinds of things could happen when the Greater Depression resumes, and millions more Americans lose their jobs, their savings, their pensions, and are kicked out of their houses the way they were back in 2008 and 2009.

Justin Spittler: Not to mention, the Fed is in a very precarious position right now. It kept rates incredibly low for so long. And that, as you mentioned, blew a bubble in all sorts of financial assets. So it must be careful not raise rates too quickly and risk popping those bubbles.

Any chance they pull that off?

Doug Casey: I don’t think so, quite frankly. They’ve painted themselves into a corner and created many problems in the process.

For one pension funds everywhere are underfunded and in a lot of trouble. And that’s true even though most of the stock and bond markets are at all-time highs.

So, interest rates go up, stock and bond prices go down. If they squeeze the bubble that they’ve blown up, the air in the bubble just goes to a different place. So, no. I don’t see any way out of this.

People have already forgotten how unpleasant it was back in 2008 and 2009. They also have no idea why it happened to start with. But it happened because government fiscal and monetary policy created distortions and misallocations of capital in the economy. So, it’s much more serious now than it was back in 2007. And the consequences are going to be much worse.

Justin Spittler: Thanks for taking the time to speak with me about this, Doug.

If you enjoy Conversations with Casey, you’ll want Totally Incorrect Volume 2 -- Doug’s most controversial book yet and you can get it for free. Learn how here.