Donald Lambro
|
Posted: Nov 30, 2018 12:01 AM
Share   Tweet
The opinions expressed by columnists are their own and do not necessarily represent the views of Townhall.com. 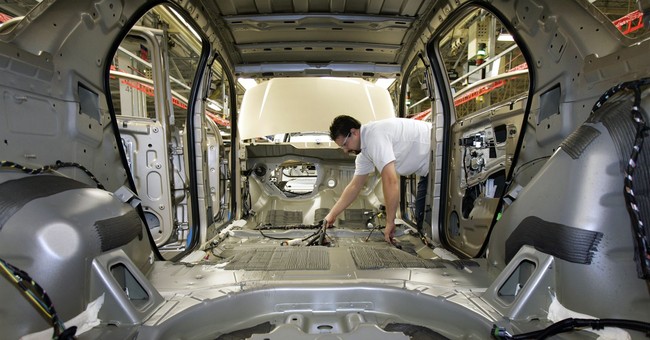 It was a devastating blow to the president’s repeated promises to rebuild the nation’s Midwestern Rust Belt factories in what he said would be a renaissance of new economic growth and job creation.

But on Monday, GM said it needed to cut $6 billion a year by dismissing employees from management ranks, and thousands from its assembly lines in Canada and the U.S.

The reason: Automobile sales have fallen by 1 million vehicles since September 2017, and “data on retail sales, industrial production and housing all suggest that the economy is tiring,” the Washington Post reported Tuesday.

“We’d be very surprised to see output growth picking up further from here; all the manufacturing cyclical indicators we follow have peaked, and some are declining,” said Ian Shepherdson, chief economist for Pantheon Macroeconomics.

GM plans to stop production in 2019 at three of its plants in Lordstown, Ohio, Detroit-Hamtramck, Mich., and in Oshawa, Ontario. It will halt building models at these plants, including the Chevrolet Impala, Cruze and Volt, along with the Cadillac CT6, and the Buick LaCrosse.

The specter of plant closings across the Midwest raises profound political questions for Trump two years from now, if he seeks re-election.

In 2016 he carried four states where the automobile industry is a major employer: Wisconsin, Michigan, Ohio, and Pennsylvania. They account for close to one quarter of the 270 electoral votes needed to win re-election.

And in a key Republican state like Ohio, the United Auto Workers is a critical voting bloc.

“He came to our community and said, “Don’t sell your house. These jobs are coming back,” David Green, the president of UAW Local 1112, told the Post. “We’ve seen nothing but job losses around here.”

Trump won about 40 percent of his UAW members in 2016, but now that vote is in doubt.

One key economic factor hovering over the automobile industry, and the U.S. economy in general, are Trump’s tariffs which have played havoc in the stock market, and with U.S. manufacturers.

“Managers believe the new trade policies are not likely to derail the U.S. economic expansion, which has seen U.S. equity markets reach new highs this year, but they believe market risks have increased,” the report says.

Alan Levenson, T. Rowe Price’s chief U.S. economist, says “risks could rise substantially if President Trump follows through on threats to impose sweeping tariffs — as much as 25 percent — on autos and auto parts.”

“That could cause a recession in the auto industry, and we don’t know what forms China’s retaliation could take,” Levenson says. “There are no rules in this.”

The U.S. auto industry employs more than 7 million people. “If car volumes were to go down 15 percent to 20 percent, I could easily see 100,000 jobs being lost because of it,” he says. “The economic impact could be so negative that it’s hard to fathom.”

But Trump is still threatening to raise tariffs on China and our other U.S. trading partners, which would make matters worse. He should read last September’s eye-popping article in the conservative Forbes magazine by senior economics contributor Frances Coppola. Here’s an excerpt:

“Let’s stop pretending. An import tariff is nothing but a tax on consumers and businesses. Not in the exporting country, but the importing one. So the 10% tariff on $200 billion of Chinese imports that President Trump has just imposed is in reality a new tax on Americans. And it will hurt America much more than China.”

He goes on to say “that if other countries respond in kind to President Trump’s tariffs, output in all countries will fall. Trade will shrink and global GDP will be lower.”

“Everyone is a loser in a trade war,” he adds.