Donald Lambro
|
Posted: Sep 22, 2017 12:01 AM
Share   Tweet
The opinions expressed by columnists are their own and do not necessarily represent the views of Townhall.com. 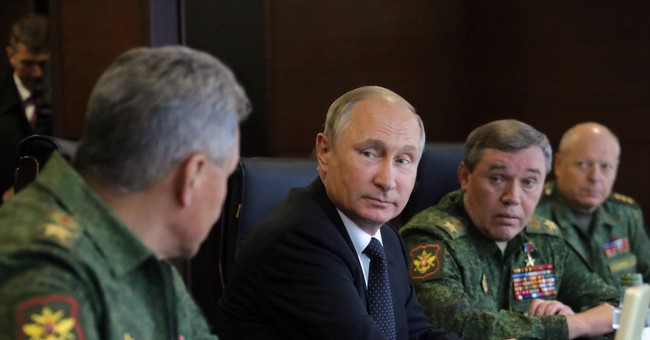 WASHINGTON - President Trump mentioned the word sovereignty 21 times in his address to the United Nations Tuesday, but said little about Russia’s efforts to seize parts of Ukraine, piece by piece, and threaten other neighboring states.

Instead, Trump reserved his most defiant rhetoric for North Korea and its rapid nuclear weapons buildup, that includes a nuclear-tipped intercontinental missile that has the potential capability of reaching U.S. territories and the United States mainland itself.

If a nation’s sovereignty is as important to a peaceful world, as Trump rightly maintains, how can he give a pass to Vladimir Putin’s seizure and annexation of the Ukraine’s Crimean peninsula?

And, more recently, the Kremlin’s provocative actions near the Baltic states and elsewhere in Eastern Europe under the guise of “military training exercises.”

To be sure, the North Korean threat poses a serious threat to the U.S. and our allies, but Trump has already sent a message that even a megalomaniac like Kim Jong Un understands.

Yet, just in case he doesn’t, Trump upped the ante in his U.N. speech, declaring that if Kim dared to strike the U.S. or its allies, “we will have no choice but to totally destroy North Korea.”

It was the kind of pugilistic, tough guy language that his political base loves, but repeating it over and over risks losing its impact on our North Korean adversaries.

But Trump was also intent on selling his “America first” agenda — the paramount political war cry in his campaign — though his explanation of what that meant got a little muddled in his prepared remarks.

“American First” in the run up to World War II were the people who wanted us to stay out of the war, and let our allies fight it out on their own.

Decades later, Pat Buchanan resurrected the American First slogan in his presidential campaign that was focused on keeping the U.S. out of other countries’ wars, nation building, and assorted foreign entanglements.

For Trump, however, America First means something else, or as he vaguely said in his speech, “principled realism” that was driven by America’s interests.

Iran, who he called a “murderous regime,” is on his list. But other countries he singled out for our involvement left many scratching their heads.

Like Venezuela, whose oppressive, dictatorial, corrupt, socialist regime is destroying a once thriving nation. The U.S., he said, must help it “regain their freedom, recover their country and restore their democracy.”

Huh? You mean, the kind of “nation building” that he ridiculed in his campaign? Well, yes, as he pledged that’s where he would “take further action” if Venezuela “persists on its path.”

Meantime, Trump is ignoring Vladimir Putin’s increasing military “exercises” in Eastern Europe, particularly along its border with Ukraine and dangerously close to the Baltic states.

It’s not getting the news attention it deserves, but Putin is sending signals that he may be plotting to send forces at some future time into neighboring countries that were once part of the former Soviet Union.

On Monday, United Press International sent this lead over its news wires:

“A NATO military leader said this past weekend that Russia is conducting military exercises near its borders with Eastern European NATO countries that appear to be “serious preparation for a big war.”

“The exercises Russia is conducting is part of a week-long program dubbed Zapad 2017 and is taking place along the borders of NATO nations Estonia, Latvia, Lithuania and Poland, as well as Finland, a non-NATO country,” UPI reported.

The last time Zapad, which means “west” in Russian, conducted such military exercises was in 2014, “shortly before Russia invaded Ukraine,” the news service noted.

NATO is now taking this very seriously, sending 4,000 troops into Poland and the Baltic nations along the border with Russia, the Guardian reported.

Last year, after Putin had invaded the Crimea, Trump insisted in an interview with George Stephanopoulos, the host of “This Week” on ABC News, that there were no Russian troops in Ukraine when in fact there were.

Covering up for Putin’s skullduggery is not a foreign policy that best serves America’s interests or those of our allies.

In 2014 Putin reportedly told his Ukrainian counterpart and other officials of his desire to send combat troops into Russia’s neighboring states.

“If I want to, I can take Kiev in two weeks,” he allegedly told Jose Manuel Barroso, the president of the European Commission, UPI reported.

The question that many observers are asking is why isn’t Trump taking this seriously?

Oh, STFU: Vox Article on 'Invasive Species' Goes Exactly Where You'd Expect in the Woke Universe
Townhall
It's not a lie if he believes it! Joe Biden describes the time he went to Israel and met with Golda Meir during the Six Day War, even though he didn't [video]
Twitchy
Kennedy Traps 'Wild-Eyed Leftist' Biden Judicial Nominee in Yuuge Lie
Redstate
40 Years Ago, Monty Python Predicted (and Mocked) Wokeness
PJ Media