Donald Lambro
|
Posted: Sep 16, 2016 12:01 AM
Share   Tweet
The opinions expressed by columnists are their own and do not necessarily represent the views of Townhall.com. 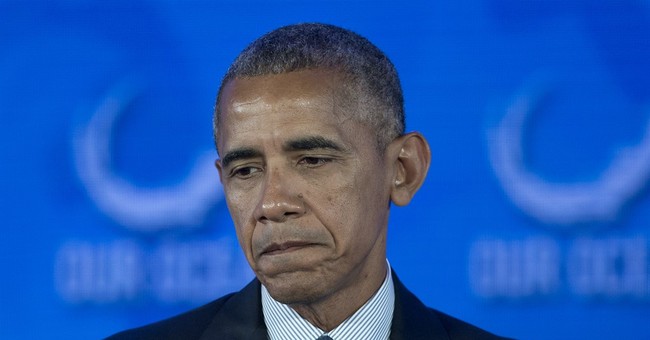 WASHINGTON -- The declining, perpetually weak Obama economy is nearing the end of its eighth year, a testament to his failed policies that continue to plague the American people.

The economy barely grew by a mediocre 1 percent in the first six months of this year, with economists saying it will likely slog along at this dismal pace for the remainder of Barack Obama's presidency.

Business investment declined, manufacturing orders fell, productivity is down, and the labor force participation rate has shrunk to 62.8 percent, as millions of long-term jobless Americans stopped looking for work and are no longer counted as unemployed. That's one of the chief reasons the jobless rate dropped during this presidency.

Americans were further tightening their belts in August, as the Commerce Department announced Thursday that retail sales fell 0.3 percent when the back-to-school buying season usually shows an uptick in spending. Not now. Auto sales also fell, along with retail sales in most consumer sectors, suggesting that the economy has fallen into a deep, economy-wide slump.

Making matters worse, major retailers like Macy's and Walmart were closing hundreds of stores and laying off thousands of workers. "More than two dozen malls have shut down in the last four years, and another 60 malls are on the brink of death," the Business Insider website said.

The administration, always searching for any dubious statistics to suggest everything's coming up roses, trotted out a Census Bureau report Tuesday that said incomes had risen and poverty was down. Predictably, the liberal national news media promoted the story, often without mentioning the larger economic troubles besetting the rest of the economy.

In fact, there were plenty of reasons to distrust this rosy report, and to understand why Donald Trump's "message of economic decay (is) resonating so broadly," The New York Times explained Thursday.

"The answer is in plain sight," the Times said. "The real incomes of most American households still are smaller than in the late 1990s. And large swaths of the country -- rural America, industrial centers in the Rust Belt and Appalachia -- are lagging behind.

"Many Americans, even those who are prospering, remain pessimistic about the fragile recovery," the Times said.

Not surprisingly, there are fears among many Americans that we may be in store for another recession, and that will work in Trump's favor in the November election.

The Wall Street Journal, citing the decline in consumer spending and industrial production, said it was unlikely "that the third-quarter is going to show some big rebound from the first half" in the economy's tepid growth rate.

But the liberal news media is still sticking by Obama, as it has from the beginning of his presidency -- exaggerating any good data, while ignoring or underplaying the decline in the economic growth rate, weak employment numbers and falling confidence in the Obama economy.

The Washington Post, for example, made the Census report on incomes the lead story on its front page, saying that the recovery was helping the "middle class" and the poor.

But in fact, most of the middle class is struggling, and 43.1 million Americans are still in poverty. And the Gallup Poll puts the real unemployment rate at 10 percent, not at the Obama administration's dubious 4.9 percent.

The Times headline over Thursday's Census report about rising incomes -- "Economy Remains Fragile for Many" -- also added a needed dose of reality to the story.

The Bureau of Labor Statistics reported this month that Obama's economy created only 151,000 jobs in August, a pathetic number in a nation of 157 million workers, millions of whom are unemployed or forced to take part-time work when they need full-time.

The number of these "involuntary part-time workers" was "little changed at 6.1 million in August," the BLS said in its latest report. "These individuals ... were working part-time because their hours had been cut back or because they were unable to find a full-time job."

Another 1.7 million discouraged, jobless Americans, who have not been able to find a job, were not counted by BLS because they hadn't looked for work in the last few weeks.

Meantime, Obama's been doing little or nothing to help boost employment since he came into office and spent $1 trillion on temporary infrastructure projects, much of which increased the budgets of countless federal agencies and programs. It did very little to create long-term employment and boost economic growth.

Now in the last year of Obama's underperforming, job-challenged presidency, his economy remains stuck in the 1 percent growth range. In other words, the economy has all but stopped growing.

On Thursday, Trump refocused on his tax-cutting, job-creating plan to get America moving again, sounding like an establishment Republican. It just might get him elected.