Trump Needs to Start Talking about the Obama Economy

Donald Lambro
|
Posted: May 06, 2016 12:01 AM
Share   Tweet
The opinions expressed by columnists are their own and do not necessarily represent the views of Townhall.com. 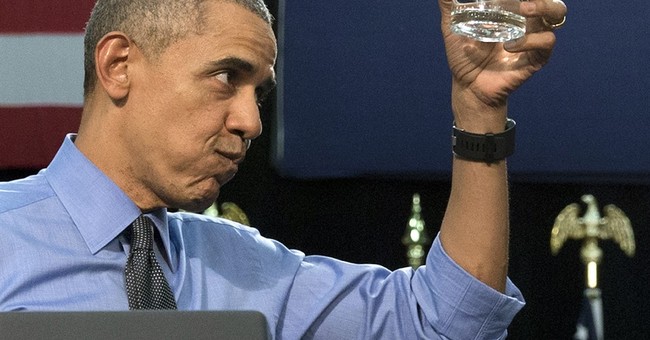 Boil down all of the bluff and bluster of the presidential campaign and two issues stand out from all the rest: a weak economy and a government riven by corruption, waste, fraud and abuse.

The national news media regularly distorts, covers up, plays down or ignores these issues entirely, though the voters know better. But what about the candidates?

A recent Gallup poll found that nearly 70 percent of our nation's small business employers believe the presidential candidates are not dealing with the issues most important to them.

In yet another Gallup poll, a staggering 75 percent of Americans "believe corruption is 'widespread' in the federal government."

"Not incompetence, but corruption," writes Jim Clifton, Gallup's chairman and CEO. "This alarming figure has held steady since 2010, up from 66 percent in 2009," the year Barack Obama became president.

"This sense of corruption probably contributes to much of the extreme anxiety and unrest we see today," he adds.

"Students and citizens generally have lost faith in their national institutions -- the biggest and most powerful of which is, of course, the federal government," Clifton says.

This has manifested itself in our electorate. In the 2012 presidential election some 5 million fewer voters turned out than voted in 2008.

That's a deeply depressing figure to remember the next time you hear anyone complain about the people who run the Congress.

"At alarming levels, citizens -- when invited to participate directly in their own democracy -- are taking a pass and staying home. Or taking their frustrations to the streets," Clifton says.

Certainly that is what is fueling Donald Trump's rise to the brink of being nominated for the presidency at this summer's Republican National Convention in Cleveland.

And has drawn millions of working class Americans and younger people to Bernie Sanders' delusional crusade to transform our market economy into a cradle-to-grave socialist experiment.

You won't hear this on the nightly network news, but the Obama economy's dismal growth rate has been running at an average rate of about 2 percent a year since it plunged into the Great Recession.

In the last three months, the economy barely grew at a minuscule 0.5 percent, and it is considered by many to still be in recovery.

Compare that to the Reagan recovery when his tax cut policies ended the 1981-82 recession in two years. And the economy grew over the next six years at an average annual rate of nearly 4 percent.

But under Obama, "Jobs haven't come back," Clifton bluntly points out in his blog on this week's Gallup website.

"According to the U.S. Bureau of Labor Statistics, the percentage of the total adult population that has a full-time job has been hovering around 48% since 2010 -- the lowest full-time employment level since 1983. This is why the middle class has been dangerously shrinking," he said.

And this is why it is premature to believe Hillary Clinton is going to beat Donald Trump in November, certainly not in a landslide.

Not while Obama's economic record is being roundly criticized by small business owners, millions of workers are trapped in low-wage, part-time jobs, and the economy has all but stopped growing.

"Obama has [on average] managed 1.7 percent GDP growth, falling family incomes and nearly 7 million men between 25 and 54 that don't even try to find a job," writes University of Maryland economist Peter Morici.

Clinton, who has never uttered a critical word of this president's failed record, is running on more of the same: higher taxes on wealthier Americans, income redistribution and a raft of more business regulations that are killing our economy and crushing job creation.

"Clinton promises a growth-slowing national version of the costly California Fair Pay Act [to] 'break down barriers' that are long gone," Morici says.

"Already, young women earn more than young men, and universities shamelessly discriminate against men by granting 60 percent of all degrees to women."

Even a cursory examination shows there is nothing in Clinton's agenda that will grow the economy. But she's offering plenty of leftist policies that will turn it into a graveyard of failed businesses, lost jobs, and little or no new business investment.

That why the Wells Fargo/Gallup Small Business Index is a key indicator of what will be driving this year's election.

Especially the responses they got when they asked, "As a small-business owner, what is the most important issue that you would like the presidential candidates to focus on during this campaign?"

But when Gallup asked owners to critically rank these issues in importance, a clearer, far more hostile mood emerges.

Still, over two-thirds of business owners polled also said the candidates were not "discussing their issues." Earth to Trump: Start talking about the economy in far more detail before it's too late.