Across the Board, Presidential Candidates Are Lightweights

Donald Lambro
|
Posted: Apr 06, 2016 12:01 AM
Share   Tweet
The opinions expressed by columnists are their own and do not necessarily represent the views of Townhall.com. 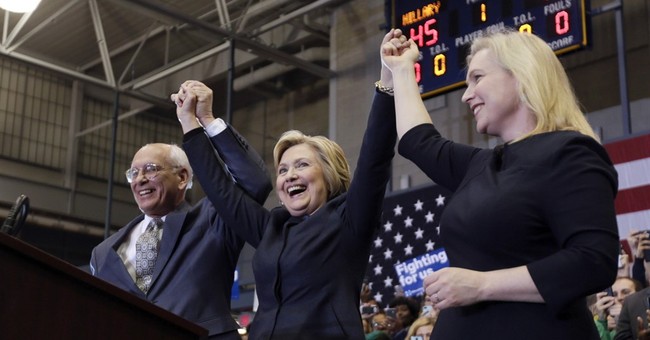 WASHINGTON -- It's hard to recall a presidential race in the modern era where the front-runners were as unpopular or frightening as the ones we have now.

Donald Trump, who's drawing a 65 percent unfavorable rating from voters, the highest among all the candidates, says he'd cut NATO's defense budget in Europe. And that, if abortions became illegal, there would have "to be some form of punishment" for women who had them.

Texas Sen. Ted Cruz, whose unfavorables have risen to nearly 50 percent, has earned a reputation for being the most unpopular lawmaker in Congress. His experience? Little more three years in the Senate, though he's been running for president during most of that time.

The Democrats are even scarier.

Hillary Clinton, the front-runner for her party's presidential nomination, has seen her unfavorable image climb to 53 percent. She remains under investigation by the FBI and other agencies for using an unsecured home computer system through which she sent out classified information in her emails.

Polls show many Americans find her untrustworthy and dishonest. Critics question both her judgment in the reckless email scandal, and her failure to protect our U.S. consulate in Benghazi, Libya, where four Americans were murdered in a preventable terrorist attack.

The email fiasco, a product of her obsessive secrecy, began with her telling Americans she had done nothing wrong and that her use of a private, personal computer was safe and proper. Her phony cover-up ended months later when she admitted she had made a big "mistake." That raises the very serious issue of her competence to be president and leader of the free world.

Her resume says she was an activist first lady who was assigned by her husband to draw up a national health care program; a U.S. senator from New York; a candidate for president in 2008; and, finally, secretary of state for four years.

But what were her achievements? The health care plan she authored and that Bill Clinton sent to Congress was an incomprehensible, Rube Goldberg contraption that was a national embarrassment. It was so unpopular that Democratic leaders, who ruled the House, refused to bring up for a vote in committee, let alone send it to the floor for approval. No one can recall any of her achievements in the Senate, or as secretary of state, for that matter.

So what has she done to merit a promotion to become the nation's chief executive officer? The campaign agenda that she has set forth so far suggests that she is running to be President Obama's third term, promising to enact all of the proposals Obama couldn't get to first base on Capitol Hill throughout his troubled presidency:

-- A national increase in the minimum wage, which a study by the nonpartisan Congressional Budget Office says will kill between 500,000 and 1 million jobs as employers cut their payrolls to keep their businesses solvent.

-- Increased tax rates on upper-income Americans, higher spending for an encyclopedia of social welfare spending, and more regulations on an underperforming economy held back by a mountain of anti-job, anti-growth taxation.

This week, the Commerce Department reported that new orders for U.S. factory goods declined 1.7 percent in February and that business spending on capital goods was far weaker than had been forecast. If you need more evidence that the economy is on a downward slide, the government said new factory orders have fallen in 14 out of the past 19 months.

With economic growth slowing in the fourth quarter to a snail's-pace 1.4 percent, and consumer confidence in decline in March, an honest, capable candidate would be highly critical of the economy's direction. But not even a peep of complaint has come from Clinton, who is in lockstep with Obama's failed policies.

If Clinton isn't scary enough for you, Democrats have a backup in Vermont Sen. Bernie Sanders, a wide-eyed, self-described socialist who is running on a reckless tax-and-spend agenda that would bankrupt our country.

But don't rule him out. He was breathing down Clinton's neck in the Wisconsin presidential primary as hordes of left-wing Democrats were flocking to his far-out socialist banner.

Earlier this week, a Marquette Law School survey, considered the gold standard of Wisconsin polls, had Sanders leading Clinton by 49 percent to 45 percent. Notably, it showed him running 57 percent to 37 percent among self-identified independents.

This is the upside-down, crazy political climate that our country is going through right now.

On the right, the leading GOP candidate is inaccurately complaining that "NATO is costing us a fortune, and, yes, we're protecting Europe, but we're spending a lot of money." Trump puts it in the "billions and billions."

That Trump plays fast and loose with the facts should be obvious by now. His bungled answer on abortion, then his retraction, shows that he hasn't thought through a lot of issues.

Pulling away from NATO in the face of Russia's threats to the Ukraine and the Baltic states? Urging Japan and South Korea to develop nuclear weapons? Then adding Saudi Arabia to the list, only to reverse himself moments later?

There once was a time when only major, heavyweight political figures were considered for the top job. Now we're offering it to four people whom you would not want running the mailroom.