Donald Lambro
|
Posted: Mar 11, 2016 12:01 AM
Share   Tweet
The opinions expressed by columnists are their own and do not necessarily represent the views of Townhall.com. 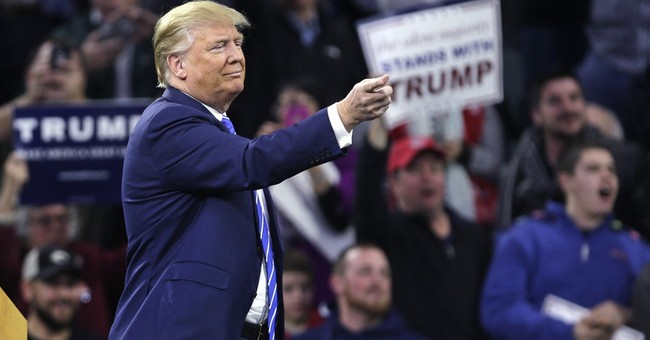 Politicians by their very nature tend to make things up, playing fast and loose with statistics in an effort to con Americans into voting for them.

In other words, they lie, knowing that most voters won't know whether their claims are true or false. Or they leave out critical information that would raise doubts about their own policy proposals.

Consider Donald Trump's anti-free trade crusade, which he knows will appeal to union members, who tend to vote Democratic, and left-wing labor bosses, who have been flogging this issue for decades.

In speeches and debates, Trump charges that China, Mexico, Japan and other countries have been robbing us blind, taking billions from Americans, because of the trade agreements we've negotiated with them. He doesn't define these multibillion-dollar losses that he tosses around, and he leaves out critical ingredients that would weaken his case.

He is talking, of course, about the trade deficit, which our government tracks and makes public in timely reports. It is a moving figure that goes up or down, depending on many economic and monetary factors.

But at its essence, it totals how much America buys in imports and sells in exports. In the last decade, coming out of a severe recession, Americans tightened their belts and bought less.

But things have not been so good for our trading partners, either. Europe has been in a recession, and still is, so they're not buying as much. And the same is true in the world's export behemoth, China, whose economy has been slowing down dramatically.

Year over year, our U.S. goods and services deficit rose by a tame $2.1 billion, or 4.5 percent, by January 2015, according to figures reported by the U.S. Chamber of Commerce last year.

But the rise and fall of our trade scores is due to the state of the global economy at any given time. We still produce a lot, and we sell a lot all over the world.

The deficits are not necessarily bad in and of themselves. In the last 100 years, America's economy has grown to be the largest on the planet, and so have its export sales in a rapidly growing global economy.

In the 1980s, when America came roaring out of a deep recession, it was in large part due to a burst of global trade deals led by President Reagan's North American Free Trade Agreement with Canada, our biggest trade partner.

Reagan envisioned expanding that pact to Mexico, our third-largest trading partner, and NAFTA's expansion by President Clinton has benefited both countries.

But it isn't a zero sum game, as Trump wants voters to believe as he argues that the Mexicans are "ripping us off." On the contrary, they get to expand their economy with increased manufacturing, and U.S. consumers benefit from less expensive products.

He's not the only one bashing U.S. trade expansion with our biggest trading partners. Socialist Bernie Sanders is attacking Hillary Clinton for supporting "virtually every one of the disastrous trade agreements written by corporate America."

But his anti-trade hysteria is a litany of bogus numbers, like the rest of his campaign, as he claims that NAFTA has resulted in 800,000 U.S. job losses.

Not true, says the nonpartisan Congressional Research Service. "In reality, NAFTA did not cause the huge job losses feared by its critics," a CRS analysis concluded last year.

Many other factors are operating here in the sweeping transformation of the American economy, including the fast-growing high tech industry, increased productivity and the rise in automation that require fewer workers.

If the free trade critics want to boost the U.S. economy and strengthen our industrial might, they merely need to lower the U.S. corporate tax, which is the highest in the industrialized world.

Trump and Sanders talk ceaselessly about "bringing back jobs" that have moved to other countries, but they say nothing about how many states are luring our trading partners with low tax rates to move their factories to the U.S. It is not a well-kept secret in the business world.

Yet Trump never mentions that Toyota operates nearly a dozen manufacturing plants here, along with many other global car companies like Honda, BMW and Nissan, and lots of other foreign firms have adopted their strategy.

Instead, after shamefully selling himself as a very smart businessman, he proposes to slap massive tariff taxes on our largest trade partners. How massive? He throws out a variety of constantly changing percentages.

"I would tax China or its products coming in," Trump told The New York Times earlier this year. "The tax should be 45 percent." In 2011 he told The Wall Street Journal the tariff on Chinese imports should be 25 percent.

As for Mexico, "Every car and every truck and every part manufactured in their plants that come across their border, we're going to charge you a 35 percent tax," he has said.

What Trump doesn't tell you is that the American people will end up paying these taxes, which, as with any levies, are embedded in the price of the product.

Think of all the products you buy at Wal-mart because they are less expensive than in other stores, even those made in China, that under Trump's tariffs will cost more at the checkout register.

But Trump's tariffs, to "make America great again," won't end there. They would ignite a trade war with our trading partners, who would raise their tariffs on anything we would buy from them.

The Smoot-Hawley tariffs that Herbert Hoover signed into law in 1930 triggered a global trade war as our economy was slipping into the Great Depression. That's what Trump threatens to do to us again.