Donald Lambro
|
Posted: Jan 22, 2016 12:01 AM
Share   Tweet
The opinions expressed by columnists are their own and do not necessarily represent the views of Townhall.com. 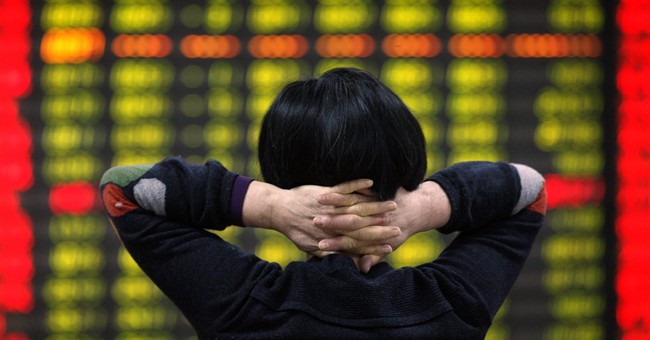 Are we headed for a recession? Much of the major economic data suggest we're moving in that direction.

That was the fear behind this month's global sell-off in the stock market. Clearly our economy is slowing down, and economists are forecasting that fourth-quarter growth in 2015 will be down significantly. Maybe around 1 percent, certainly less than the anemic 2 percent growth rate we've been experiencing throughout Barack Obama's failed presidency.

That would move the U.S. economy into near-recession territory if it continues its slide in the first three months of this year. All the telltale signs are there. Consumers aren't buying like they used to, even with rock-bottom oil prices and a gas tank of regular costing less than $2 a gallon.

Yet retail sales fell in December at the height of the Christmas buying season. A New York Times headline last week put it this way: "Retail Sales Were Lackluster in December, Signaling Fragile Economy."

Domestic manufacturing is similarly weak, unsold inventories are piling up, reducing new orders; and the stock market has been in a free-fall since the year began. All because of China's economic slowdown, or so the forecasters tell us. But that slowdown still leaves China growing at around a 4 to 5 percent rate, a level Obama has never achieved in the past seven years of his presidency.

Something else is going on here that "reflect(s) wider shifts in the habits and fortunes of many American consumers," writes Times' economic analyst Hiroko Tabuchi.

In his State of the Union address, the president painted an exaggerated picture of the economy, job creation and a slight rise in incomes.

But Tabuchi says, "Much of the wage gain has come at the top end of the wage distribution, leaving many middle-income Americans feeling less than well-off. And burned by the Great Recession, many households have increased their savings, while paring back (credit card) borrowing."

"What does this mean then?" asks The Washington Post's economic blogger, Matt O'Brien. "Not that markets think there will be a recession, but that the recovery is still so fragile that there could be one."

It doesn't take a degree in political science to know that a weaker economy in a presidential election year will hurt the Democrats and especially Hillary Clinton, whose liberal agenda is a carbon copy of Obama's economic policies.

Clearly, the Republicans will have a political advantage in November, even if the economy is teetering on the edge of a recession, let alone falling into one.

First and foremost, all of the GOP candidates agree on one pro-growth, pro-job policy to get our economy growing again: tax cuts.

Donald Trump has proposed cutting the corporate tax rate, the highest in the industrialized world, which would dramatically boost our economy. And all of the GOP candidates are behind a long-stalled plan to cleanse the loophole-ridden tax code of corporate welfare and apply the increased revenue into lowering tax rates.

But some of Trump's prescriptions for our economy are outdated, and he's failed to point out that it's undergone major changes in recent decades.

Earlier in the campaign, Trump told voters that foreign car companies were taking advantage of our trade laws, declaring that "their ships are lined up" on the West Coast and hurting our own manufacturing base.

But the fact of the matter is that our biggest overseas competitors are making their products here and creating millions of American jobs. Japan's Toyota, for example, has built 10 manufacturing plants in the United States, making Camrys, Avalons and other car and truck models in places like Indiana, Kentucky, Texas and Mississippi.

In 2011, "Honda built more cars at its Alabama, Indiana and Ohio facilities than it did in Japan," according to data from Automotive News and the Japan Automobile Manufacturers Association. BMW, Mercedes and Volkswagen have four passenger vehicle assembly plants here, too, and others are following suit.

In 2011, British-based Rolls-Royce started making engine parts in Virginia and shipping them to Europe and Asia. In that same year, a German company, Siemens, began making power-plant turbines in Charlotte, North Carolina.

USA Today reports "the long-jilted USA is becoming a manufacturing hotbed for dozens of foreign companies in aerospace, energy, chemicals and other manufacturing industries."

Between 2007 and 2012, "foreign investment in U.S. manufacturing totaled $493 billion, versus $270 billion in the previous six years, according to the Organization for International Investment," writes Paul Davidson.

Even so, you still hear the politicians denounce policies that ship jobs overseas, when the trend is foreign firms shipping jobs into the U.S., the world's largest economy.

But Trump has called for a 25 percent tariff on Chinese goods coming into our country, which most economists say would lead to a destructive trade war.

That would hurt American consumers in their wallet and the stores, like Walmart, that sell their products. "In a trade war, everybody loses," says Nicholas Lardy, senior fellow at the Peterson Institute for International Economics. Besides, he says, "Most of the stuff we're buying from China" hasn't been made in the U.S. for decades.

Raising tariffs will hurt our economy, as they did in the 1930s and Great Depression.

The GOP is promoting the right prescription that has always strengthened our country. Reform our tax code, cut the rates, including the capital gains rate on investment, and watch our economy soar.