Separating Winners from the Losers 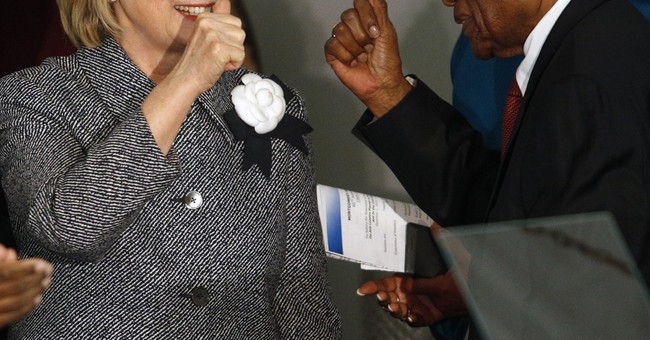 Whatever may be the outcome of the 2016 presidential election, it is turning into one of the most bizarre contests in U.S. political history. In both parties.

President Obama won the presidency in 2008 when the economy was the overriding issue in the political polls, and< seven years later it's still the number one issue.

Obama's job approval polls have been stuck in the 40 percent range over the course of much of his presidency, with a big chunk of the electorate saying the economy is "getting worse."

And there's lots of evidence to support their grievances. Economic growth has been, and still is, bumbling along at a mediocre 2 percent annual pace. Jobs are being created but much of them come in low-paying part-time work.

Even Democratic analysts are blaming party leaders for their their failure to get the economy moving again.

One of them is Democratic pollster Stanley Greenberg who explored his party's troubles in a new book, "America Ascendant."

In an interview with Washington Post political analyst Dan Balz, Greenberg argues that these economic issues, "now in the forefront of the Democratic party's debate, have not been the principal focus of the Obama administration."/p>

"His economic project was the recovery," Greenberg said. "But that only takes you back to where we were. What I argue is that there are big structural economic and social problems, and the reason why this new majority is disengaged is because Democratic leaders have not addressed these problems."

He makes an important point. Go back and search the newspaper archives over the past seven years and you'll be hard pressed to find any criticism from party leaders about the failed Obama economy.

One might think that after seven, long, hard years of a subpar, underperforming economy, the Republicans would be ready to kick the Democrats out of the White House next year with a seasoned, can do candidate whose been there, done that.

The electorate was certainly ready to vent its anger on Obama in the midterm elections, and they did so with a vengeance: inflicting major losses on Democrats in the House and Senate in the 2010 and 2014 elections and putting the GOP in charge of Congress.

Democrats have also suffered major losses elsewhere across the country in a majority of the governorships and state legislatures.

This is the time when a fully experienced, Republican leader's chances of winning back the White House -- after two terms of Obama's unpopular presidency -- have never been better.

But the Republicans remain locked in a bitter, divisive, and endlessly controversial contest for the nomination -- led by business mogul and former reality TV star Donald Trump.

He was catapulted to the head of the nominating line by a bombastic attack on the estimated 11.3 million illegal Hispanics who live in the U.S., declaring that he will round up and deport all of them, parents, children, grandparents. Then build a high, unclimbable, multi-billion dollar concrete wall along most of the two thousand mile U.S.-Mexican border.

But perhaps his biggest challenge has been his honesty -- making charges and statements that have turned out to be false. The latest one is his repeated declaration that he saw "thousands" of American Muslims in New Jersey cheering the terrorists' attack on New York's World Trade Center in 2001.

"I saw it. So many people saw," said the Republican frontrunner on NBC's Meet The Press.

But when asked where he saw it, he replied, "I saw it on television. I saw clips. And so did many other people."

Thus far, no one has come forward with any newspaper story or TV clips to prove Trump's claim.

This is important because Americans have been lied to many times by their presidents, and it seems to have hurt Trump.

Running slightly behind Trump is former pediatric brain surgeon Ben Carson whose campaign was hurt last month when one of his advisers raised troubling doubts about his grasp of foreign policy issues.

"Nobody has been able to sit down with him and have him get one iota of intelligent information about the Middle East," Duane R. Clarridge, a top adviser to Carson on terrorism and national security, told The New York Times.

After the attacks on Paris, and elsewhere, how could anyone support a candidate who, the Times headline said, "Is Struggling to Grasp Foreign Policy."

For the time being, the GOP's Tea Party Conservatives have rallied to the banner of these two men, with everyone else slightly above or in the lower single digit range.

Trump's nomination would guarantee that Hillary Clinton receives every Hispanic vote in the country which would doom the GOP's chances of recapturing the White House.

Carson would be taking a night course on foreign policy and national security strategies, while ISIS plots its next attack.

What a shame. The Republicans are now in full control of Congress, with sweeping tax cuts on the drawing board and sizable budget cuts to boot. All they need to do is put someone in the Oval Office who will approve them.

Meantime, Hillary Clinton is adding the finishing touches on a plan "to echo the spending levels" of Obama's next budget, the Post reports. Including about $2 trillion in new taxes over 10 years.

Think seriously about that situation when you go to vote in the upcoming presidential primaries.