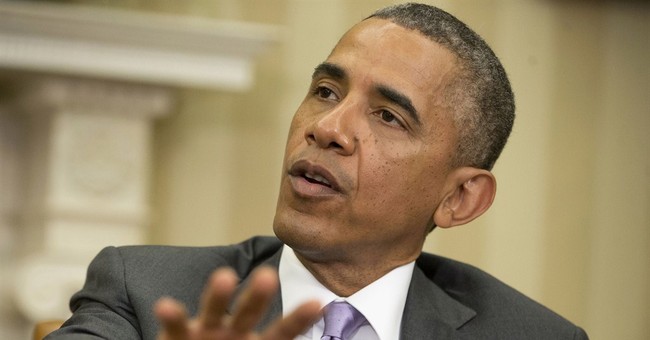 WASHINGTON - Consumer prices jumped sharply last month, rising more than previously forecast for just about everything we buy, from a gallon of gas to the food we eat.

It's bad enough that over the past six years Americans have had to suffer from painfully weak economic growth, too few jobs, flat wages and rising taxes, under President Obama's policies. But now we're facing rising inflation that economists say will only get worse.

Consumer prices increased at more than a 4 percent annual rate in May, rising for the second month in a row, pushing inflation in the past year to its highest level since 2012, according to the Department of Labor.

Food prices alone rose 0.5 percent in May, the sharpest rise in three years. They're up by 2.5 percent in just the last 12 months, the fastest in almost two years.

Energy prices were rising at an even faster rate, up by 0.9 percent -- led by higher electricity and gasoline rates. The reason: administration regulatory policies that have pushed up utility costs, stymied oil exploration and blocked completion of the Canadian oil pipeline.

Economics columnist Robert J. Samuelson called the president's opposition to the Keystone XL pipeline from Canada to the Gulf of Mexico "an act of national insanity."

Other economists have been equally critical of his oil policies.

Obama "has not been willing to open up drilling for oil off the Atlantic, Pacific and much of the Gulf coasts. That keeps America dependent on imported oil, and sends consumer dollars abroad instead of creating jobs here," says University of Maryland business economist Peter Morici.

Certainly, the war in Iraq has been a major factor, too, as the global price of crude oil has shot up in response to the crisis in the Middle East.

But gas prices under this administration's anti-fossil fuel policies have been rising for sometime and will go higher. The national average price for a gallon of regular climbed to over $3.66 this week -- compared to $1.90 a gallon on the day Obama was inaugurated.

This didn't happen by accident. During Obama's 2008 presidential campaign, his senior energy adviser, Steven Chu, told The Wall Street Journal: "Somehow we have to figure out how to boost the price of gasoline to the levels in Europe."

At that time, the price of gasoline in Europe was about $9 a gallon, and soon after, Obama made Chu is Energy secretary.

"In the last week, the national average [price of a gallon of regular gasoline] has risen 2 cents per gallon, but in some states the pain at the pump is worse than others," GasBuddy.com reported this week.

Ohio has seen prices jump to $3.86 a gallon, and Illinois "is bracing for $4 a gallon statewide, with average prices jumping to $3.95 a gallon," says the website that monitors gas prices around the country.

But even more shocking is that the government's core Consumer Price Index (CPI), which excludes food and energy costs, rose 0.3 percent last month. That's the largest increase since August 2011.

What this means is that life for many middle and lower income workers, who were already struggling just to make ends meet, is only going to get worse.

"Real wages have actually fallen 0.1 percent in the past 12 months, suggesting that Americans have little ability to increase spending and thereby boost the economy -- unless they save less or take or more debt," says Wall Street Journal "Market Watch" analyst Jeffry Bartash.

And these are workers with full time jobs who are trying to survive in the Obama economy.

But what about the long-term unemployed, many of whom live at subsistence levels, and involuntary part-time workers who desperately need a full-time job but can't find one?

Federal Reserve Chairman Janet Yellen spoke about these Americans at her last news conference, reminding us that America's dubious 6.3 percent unemployment rate is effectively a great deal higher than that.

Don't expect to see a panoply of news stories on the nightly network news shows about any of this.

The highly paid producers, anchors, writers, reporters and technicians who put together the nightly news never experience any impact from inflation. Especially those who are on expense accounts.

But, then, you would have to search long and hard to discover the last time Obama has addressed this subject at any length.

He's been too busy feeding inflation through ever higher federal spending bills, imposing thousands of new, costly business regulations, and higher taxes sprinkled through Obamacare, along with a mountain of corporate welfare subsidies for special interests that in turn drive up prices and keep them there.

"The quagmire of regulations grows worse, making it much easier to start businesses and hire workers in Asia than America," Morici says.

Obama's latest proposal to boost incomes for mid-to-low income workers is to raise the minimum wage across the nation.

But countless economic studies show that this will only encourage more businesses to cut their payrolls.

Banks are shifting to online transactions. Supermarket counters are becoming increasingly automated where shoppers check themselves out with the swipe of a credit card. That's only the beginning.

The nonpartisan Congressional Budget Office crunched the numbers and said Obama's retro-idea would destroy at least 500,000 jobs and possibly one million.

Thank goodness his plan is going nowhere in Congress where even many Democrats think it is a terrible idea that will kill more jobs than he already has thus far.