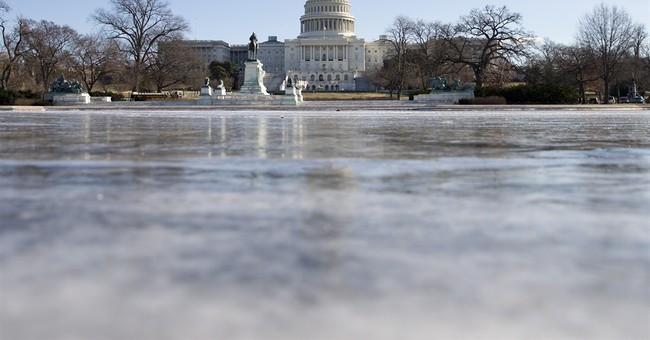 Last February, as Congress's automatic budget cuts began chipping away at the government's out-of-control spending levels, Obama went hyperbolic. The spending cuts would deal a "huge blow... to our economy as a whole" and "all our economic progress could be at risk."

In a string of speeches, the president played his fear card again. Air traffic control operations were being put at risk. Cancer research projects would be halted. Your food safety was in jeopardy.

The White House was put on a full, scare-them-to-death alert to frighten Americans into thinking the sequestered cuts would doom economic growth and destroy the very foundations of our economy.

Alan Krueger, who chaired the White House Council of Economic Advisers at the time, said the sequesters would slash 750,000 by year's end.

Democratic Leader Harry Reid went on the Senate floor to claim that "We have learned that the sequestration has cut 1.6 million jobs." The Washington Post's combination fact checker and lie detector, Glenn Kessler, awarded Reid his highest score for

Well, it turned out that Obama's economic fear rhetoric was no more truthful than when he promised Americans, "If you like your health insurance plan, you can keep it."

The sequester cuts didn't hurt our economy, they helped it. Wiser voices who said the budget reductions would be a net plus for the economy were of course right.

As the sequester was doing its work throughout 2013, budget watchers and economic analysts pointed out that the number of jobs being created didn't decline, they grew. Nowhere near the number needed to bring unemployment down to normal levels, but they did move in the opposite direction that Obama and his fellow fear-mongers were predicting.

"The economy added about 1 million new jobs over the period during which the sequester was supposed to cost 750,000 jobs (or 1.6 million, if you believed Harry Reid," Tom Giovanetti, economic analyst at the Institute for Policy Innovation, wrote late last year.

As the sequester worked its will over the course of past year, the trillion dollar budget deficits fell to $650 billion. That was due in part to the spending reductions but also to slightly better economic growth.

By the second quarter of 2013, the economy grew at 1.7 percent when economic forecasters were predicting slower growth in the 1 percent range.

By the third quarter, the nation's gross domestic product -- the largest measure of our economy's growth -- rose by 3.6 percent, according to the Commerce Department's Bureau of Economic Analysis.

Much of that growth was due to inventory accumulation that many forecasters said would not hold up in the fourth quarter.

Nevertheless, the GDP number was a far cry from Obama's hysterical and obviously erroneous warnings that the nightly network news media swallowed hook, line and sinker.

The fact that the administration would try to make such an issue over just $85 billion in budget cuts -- divided equally between defense and non-defense appropriated funding -- was preposterous on its face.

You don't have to be a math genius to understand that $85 billion is a very small percentage out of a $3.5 trillion budget in a nearly $17 trillion economy.

But over the past year, there has been feed back from the small business community and smaller government advocates that the sequester cuts were at least a step in the right direction.

"I believe the... sequestration helped the economy," said small business owner and certified public accountant Gene Marks. "It is comforting to know that the legislative branch can stand up in the face of withering criticism and dire warnings from the media and even the president to take action..."

By the middle of 2013, even some in the network news media were beginning to question Obama's furious attacks on the budget cuts. One analysis on the ABC News web site that got the White House's grudging attention, asked, "Did Obama cry wolf on the sequester?"

"The sequester's barely visible economic impact, combined with relatively strong economic forecasts, doesn't seem to have hurt Republicans politically and may have even made them bolder," wrote ABC analyst Abby D. Phillip.

The 2014 compromise budget approved this month and sent to Obama for his signature suggests the West Wing, and Democratic leaders, may have gotten the message.

The $1.1 trillion budget restores some sequester cuts to programs like Head Start, medical research and job training. But it left many agency budgets "tens of billions of dollars lower than Obama had requested and... Democrats had sought," the Post reported.

That was seen as "a victory" for Republicans "who have succeeded in rolling back agency appropriations to a level on a par with the final years of the George W. Bush administration," the newspaper reported.

There are two, unmistakable political messages in all of this that the Obama administration still refuses to accept.

First, Americans will support significant spending cuts when they see budget reductions leading to an improved economy and more jobs.

Second, Obama no longer has any credibility on fiscal policy issues if he had any to begin with.

With his approval polls falling to 40 percent and a new Gallup poll finding that "Americans' economic outlook has soured" in recent weeks, the GOP's political prospects in the November midterm elections are looking better all the time.

Two Fateful Events Occurred on January 15 Which Changed America for Years to Come; One Glaring, the Other Quiet
Redstate
It took 27 days for CNN to say what they previously accused Trump of lying about
Hotair