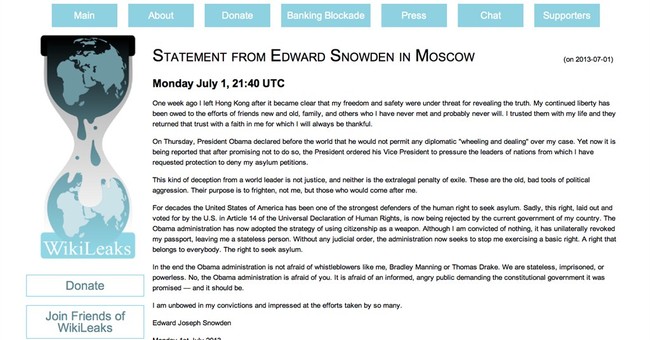 Fugitive Edward Snowden, wanted on charges of espionage against his own country, is caught in a trap of his own making.

He finds himself stranded at an airport in Moscow where he's been promised political asylum by Russian President Vladimir Putin who says he will never turn Snowden over to the United States to stand trial on criminal charges of exposing national security secrets to our enemies.

"Russia has never given up anyone to anybody and does not plan to," Putin said this week.

But the former Soviet KGB agent's offer of a safe haven comes with one condition. "If he wants to stay here... he must stop his work aimed at harming our American partners, as strange as that sounds coming from my lips," he told reporters at a gas exporters' conference in Moscow on Monday.

It sounds more than strange from the lips of a man who ruthlessly rules Russia with an iron hand, crushing his political opponents, jailing people who dare to criticize his autocratic government that has led his country back into a dark era of political corruption, skullduggery and fear.

It is more than likely that the Russians have debriefed and interrogated Snowden by now, and no doubt made him enticing offers of asylum that they hoped he could not refuse. Many secrets are still hidden in his laptop, but can anyone really believe Putin's intelligence apparatchiks have not seen them?

There are those who suspect that Snowden is or was a Russian agent who sought jobs in the CIA and the secret National Security Agency that ran PRISM, the telecom surveillance program he exposed to the world.

Putin flatly denied that again Monday. "As for Mr. Snowden, he is not our agent and he is not working with us," he insisted. Sure.

Snowden has been in Moscow for nine days in a transit area of Moscow's Sheremetyevo airport, plotting his next move, even as he declares that he would not accept any demand by Putin or anyone else that he stop revealing more secrets about U.S. intelligence activities.

U.S. intelligence officials here believe that Snowden has a large cache of information about American surveillance programs that he intends to reveal over the coming weeks and months in an effort to further damage U.S. security on the international stage.

In a letter to Ecuador's President Rafael Correa seen by the Reuters news agency Monday, Snowden complains he is being wrongly persecuted by the U.S. for revealing its surveillance methods, but says he will not be silenced.

"I remain free and able to publish information that serves the public interest," he wrote in a bizarre, delusional, far left manifesto of his larger, longterm goals.

"No matter how many more days my life contains, I remain dedicated to the fight for justice in this unequal world," he wrote in an appeal to Correa, the leftist leader who has launched his own campaign against the right of a free press to criticize his administration.

At times, Snowden's self-serving writings veer off into the psychotic, accusing the U.S. of unfairly conducting "an extrajudicial man-hunt costing me, my family, my freedom to travel, and my right to live peacefully without fear of illegal aggression."

In a statement released by the anti-secrecy web site WikiLeaks, Snowden said the Obama administration had used tactics that had turned him into "a stateless person."

Indeed, he seemed naively and peculiarly surprised that the U.S. revoked his passport in its efforts to bring him to justice. Why on earth does he think WikiLeak founder Julian Assange, his hero and role model, who published reams of classified U.S. documents, is holed up in the Ecuador embassy in London?

President Obama, while traveling in Tanzania, said the U.S. has been working through law enforcement channels and at other high diplomatic levels with the Russians "to find a solution to the problem."

But Putin, enjoying any opportunity to stick it to the U.S., was not budging from his conditional offer of a safe harbor, even as he acknowledged that Snowden isn't going to buy it because "he feels himself to be a human rights activist." If Snowden will not agree to his conditions, Putin said, well then "he must choose a country of destination and go there."

Snowden wants to do just that. The Los Angeles Times reported Monday that he's given Russian officials a list of 15 countries to whom he plans to apply for asylum.

Snowden is a young, naive, undereducated computer hacker and political zealot who is under the simple-minded delusion that America's government shouldn't have any secrets; that it should conduct no surveillance programs to protect Americans from deadly terrorist attacks; and that a free society means that law enforcers should not conduct precautionary inquiries into people here and abroad who are, with just cause, suspected of plotting to kill as many of us as they can.

This week, evidence was presented in the court-martial trial of Bradley Manning who leaked classified U.S. documents to WikiLeaks that showed al-Qaeda leaders reveling in the secret information that they said will help them to attack our country.

"By the grace of God the enemy's interests are today spread all over the place," said Adam Gadahn, a member of the terrorist group, in a 2011 al-Qaeda-produced video. The video urged its terrorist members to study the material revealed by WikiLeaks, whose release was applauded by Snowden.

The prosecution at Manning's trial offered excerpts from the winter 2010 issue of al-Qaeda's online magazine "Inspire," which said, "Anything useful from WikiLeaks is useful for archiving."

The government also submitted evidence that al-Quaeda leader Osama bin Laden obtained Afghanistan battlefield documents published by WikiLeaks that were discovered during the May 2011 raid in his Pakistan compound where he was killed.

This is what's at stake in Snowden's unconscionable theft and disclosure of vital national security information that has terrorist leaders cheering his evil acts. He is not a hero. He's a criminal who is helping terrorists wage war on Americans and our homeland.