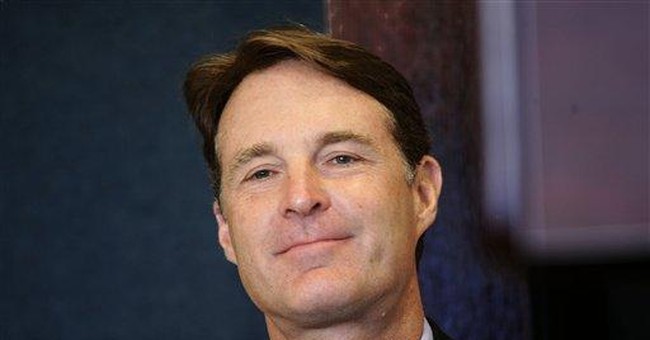 WASHINGTON -- Another political bombshell shook Democrats Monday when Indiana Sen. Evan Bayh chose not to seek reelection in the face of a rising Republican wave that threatens his party's control of the Senate.

Bayh is the fifth Democratic senator who is not running in this year's midterm elections, handing the GOP one more vulnerable open seat that the Cook Political Report immediately moved to its "leaning Republican" column.

Bayh gave several self-serving excuses for abandoning his bid for a third term, including what he saw as rampant partisanship that has turned the Senate chamber into a burial ground for the Democrats' agenda. He could accomplish more in the private sector, he said, though insisted he was confident of winning reelection if he ran.

In fact, Bayh, who has never faced serious competition before, was in for a very tough race against the Republicans this time. A Rasmussen poll had him in a virtual dead heat last month against conservative Rep. John Hostettler, who announced his candidacy. In a theoretical matchup, he trailed Rep. Mike Pence, the House Republican Conference chairman, who has since decided to seek reelection.

Former Sen. Dan Coats was also preparing to join the race, and private, internal Republican polls showed he could have defeated Bayh.

But besides the stiff opposition that was building against him, Bayh also faced an increasingly hostile conservative electorate that disapproved of his support for a deeply unpopular Obamacare plan, a waste-ridden $800 billion jobless "stimulus" package, and putting wartime terrorists on trial in our civilian courts with all of the rights accorded U.S. citizens.

Despite a rich $13 million war chest, the former two-term governor who once nurtured presidential ambitions sees the situation for what it is. The national political environment has turned sharply against the Democrats in a protest-driven election where Republicans are poised to make major gains in Congress.

Bayh faced the uncomfortable prospect of running in a state suffering from a near 10 percent unemployment rate in a weak national economy that showed no significant signs of new job growth this year, according to the Obama administration's tepid employment forecasts last week.

That, perhaps more than any other factor, was more than Bayh could handle. While he has had a meteoric political career in the Hoosier state, Indiana remains a swing state that Obama only narrowly carried in 2008, but whose political grassroots are still basically conservative and still leans Republican.

He tried to cover his left-leaning flank with potshots at the partisan warfare that has engulfed Congress, pointing to Republicans who supported a proposed deficit reduction commission bill but turned against it when it came up for a vote. In fact, the GOP lawmakers couldn't stomach the idea of a group of unelected commission members proposing to slash the deficit by raising taxes on an economy still flat on its back.

In the end, Bayh, who rarely led on any controversial issues, admitted he didn't have the fire in his belly to fight for his own seat or for what he believed in the legislative arena. "After all of these years, my passion for service to my fellow citizens is undiminished. But my desire to do so by serving in Congress has waned," he said.

Nonetheless, Bayh's decision came as a shock to his party and to his closest colleagues, who had expected him to run. Just days before his withdrawal, senior aides and Democratic state chairman Dan Parker were telling reporters that he was on course for another campaign.

On Capitol Hill, Democrats were shaking their heads in disbelief at the number of Democratic incumbents and potential candidates who were dropping out of contention.

Bayh's desertion follows the upset in Massachusetts where Republican Scott Brown won the late Sen. Edward Kennedy's seat. The midterm election races have barely begun, and yet the GOP seems to be scoring one tactical victory after another by driving Democrats from the field.

If Republicans win the eight Democratic seats the Cook Political Report lists as solid, likely or leaning Republican, hold on to their own four open seats, and pick up a couple of wildcard seats, they would have a 51-seat majority.

Right now, this seems like an improbable stretch for the Republicans, but so was winning Ted Kennedy's seat in heavily Democratic Massachusetts.