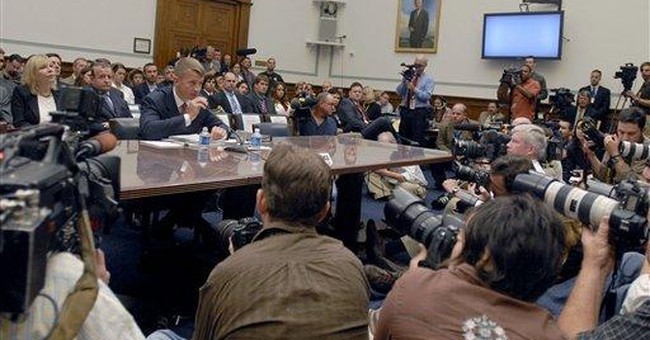 The Justice Department's decision to investigate the interrogation methods used by the Bush administration's war on terrorism sent a chilling message to CIA agents that they could be prosecuted for protecting our country from another attack.

Despite President Obama's promise to CIA personnel earlier this year that he did not want to reopen the debate over aggressive-interrogation practices in the previous administration, Attorney General Eric Holder named a special prosecutor to go after agents who acted with the approval of the Bush Justice Department's legal rulings.

Holder not only overruled Obama -- who caved in to his attorney general and said it was his call -- he dismissed the bitter opposition of CIA Director Leon Panetta and even attorneys in his own department.

It was the latest move in a number of actions that have defanged the CIA and reduced its effectiveness in the war on terror, after eight years of foiling numerous plots that has kept our country safe.

Seven months into his presidency, Obama has moved to close down the Guantanamo Bay facility for prisoners in the war against terrorism. He has issued directives that have tied the hands of intelligence agents trying to discover terrorist plots against Americans before they occur. He has removed the CIA's authority for interrogation and placed it in the White House. He has undercut CIA chief Panetta, raising questions as to who is running the agency, Panetta or the White House's political agents.

His administration has even banned Bush's phrase, "war on terrorism," and in the past few months needlessly released top-secret intelligence documents that have given Al Qaeda and the Taliban terrorists a treasure-trove of information about interrogation policies and practices.

And now he has given in to Holder's plan to prosecute some of the CIA's best agents, breaking a solemn public pledge to the nation's chief intelligence agency that its agents would not be persecuted simply for doing their job.

"President Obama's decision to allow the Justice Department to investigate and possibly prosecute CIA personnel, and his decision to remove authority for interrogation from the CIA to the White House, serves as a reminder, if any were needed, of why so many Americans have doubts about this administration's ability to be responsible for our nation's security," said former Vice President Richard Cheney.

People who have talked to Panetta recently say his embattled agency is suffering from deep morale problems as agents wonder why the White House seems to be spending more time and effort investigating them than stepping up the war on terrorism.

Career CIA agents now have good reason to fear that Holder's -- and now the president's -- special prosecutor, John H. Durham, will be coming after them with both guns blazing and maybe other former top officials in the Bush administration.

"Once Durham starts digging," the Washington Post reported this week, "... the veteran prosecutor could uncover evidence that leads him higher up the chain of command in an inquiry that grows broader than what the Justice Department outlined Monday."

The dangerous precedent this sets is contrary to Obama's oft-repeated intention to focus on the future, not the past. Instead, his administration is now intent on prosecuting public officials who acted at the time under legal opinions cleared by the Justice Department.

Administration officials say the president is sensitive to the damaging impact that a criminal investigation could have on the CIA and has drawn a tenuous line that they describe as a "balancing act."

But through information gathered from high-value terrorist prisoners during CIA interrogations, we know that our enemies are plotting to attack again and kill as many Americans as they can. This isn't a time for a nuanced "balancing act." It is a time to send a message to those who would do us harm that we are using all of the tools, methods and weapons at our command to protect our national security.

That was the clear, unmistakable message President Bush sent to our enemies, and no one can quarrel with the fact that the policies, programs and actions he implemented successfully defended us for eight years.

But that is not the message the Obama administration is sending as batteries of lawyers are being sent in to defend terrorist detainees, some of whom who are either being read their Miranda rights or sent back to their homelands where many have resumed their terrorist lives.

Indeed, instead of stepping up the war on terrorism, his administration seems to be declaring war on America's intelligence apparatus with plans to mount a criminal investigation against a frontline national-security agency.

"It doesn't appear to be a serious move" to combat terrorism, Cheney said Sunday on Fox News. "It's a direct slap at the CIA."

It is also another egregious example of this administration's misguided retreat in a war where failure is not an option.