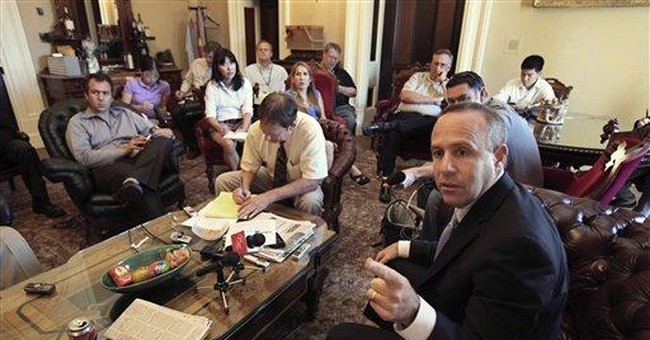 WASHINGTON -- President Obama is portraying his campaign to enact a government-run, nationalized healthcare plan as a titanic battle between him and the Republicans in Congress.

The White House, which has been thrown on the defensive in this fight, may think that's smart politics, but no one's really buying it -- except the news media. The biggest obstacle to Obama's big-spending, tax-heavy plan to create one of the largest entitlement programs in American history is not the powerless GOP minority who has had little or no strategic role in the emerging legislation. It's the Democrats themselves.

In the House, many of the 52-member, moderate Blue Dog Democrats were threatening to block the pending bill. "I don't like the idea of raising taxes in the worst economic crisis since World War II," said Rep. Mike Ross of Arkansas, chief negotiator for the Blue Dogs. He warned his party last week that "there's no way they can pass the current bill on the House floor. Not even close."

In the Senate, Democratic Majority Leader Harry Reid said he could not vote for a bill financed by a tax on employee healthcare benefits, warning that his party could lose 10 to 15 Democrats if such a tax ended up in the bill.

It isn't getting reported on the nightly network news shows, but the radical Democratic House bill, with its soak-the-rich, 50 percent-plus income tax rates, stands no chance of passing the Senate, where 60 Democrats now rule the roost.

Democrats were spurning the costly, draconian healthcare-reform bill approved by the Senate Committee on Health, Education, Labor and Pensions. Democratic Sen. Kent Conrad of North Dakota, the Budget Committee chairman, turned thumbs down on the bill that the director of the Congressional Budget Office said would significantly boost healthcare costs, not reduce them.

It's not just Democratic members of Congress who are rebelling against the massive spending bills the president has spawned in his zeal to take over the nation's healthcare system in the middle of a severe recession. Key Democratic allies are advising their party to delay any action on bills that they fear would further weaken a shrinking economy struggling to regain its health.

Listen to what Democrat Robert Shapiro, a top economist in the Clinton administration's Commerce Department, had to say in a recent analysis for the New Democratic Network: "Even so, the healthcare reforms being considered by Congress all involve even higher healthcare costs for most businesses, which will mean more job cuts even as the economy grows. No one questions that healthcare reform is an urgent, national priority -- as are efforts to contain the risks of climate change. But we gain little except a false sense of accomplishment by enacting healthcare reforms that also aggravate the new jobs problem, or climate legislation such as Waxman-Markey which cannot deliver significant reductions in greenhouse gases," he wrote.

Instead, Shapiro advises his party "to first focus on the underlying problems in the current downturn and the issues with jobs and incomes -- before we take on broad and urgent reforms in other areas. The politics, if nothing else, virtually dictate it, since a growing economy that creates large numbers of new jobs and pushes up incomes is always a prerequisite for the public's support for reforms that, one way or another, end up imposing new costs on them."

Meantime, some Senate Democrats were blaming Obama himself for opposing (correctly, in my opinion) a tax on some employer-provided medical-insurance benefits to help pay for healthcare coverage for the uninsured.

"The president isn't helping. He doesn't want it," Senate Finance Committee Chairman Max Baucus of Montana told reporters last week as he and his colleagues struggled to come up with alternatives to produce $320 billion in additional revenue.

Perhaps the most alarming manifestation of the Democrats' deepening divisions in the bitter healthcare battle was the specter of the Democratic National Committee running television ads against members of its party to pressure them into supporting Obama's plans.

Funded by Organizing for America, Obama's campaign in waiting, the ads are running against Democratic senators in Nebraska, Ohio, Florida, Louisiana, Indiana, Arkansas and North Dakota. An angry Reid called them "a waste of money." Their own president was "running ads against Democrats," he fumed.

As support for health care seemed to unravel, Obama sought to unify his party last week; the president brought doubting Democrats to the White House in a desperate bid to lure them back onboard.

"The president sought my views on where things stand in Congress, which we discussed. For my part, I suggested we not impose an arbitrary deadline to get something done," said Democratic Sen. Ben Nelson of Nebraska.

With polls showing public approval of the way he is handling the healthcare issue falling below 50 percent for the first time, the White House is desperate to pass legislation before Congress shuts down for the rest of the summer and his polling numbers weaken further.

But it now seems unlikely that Obama will get Senate action before the August recess, allowing opponents more than a month to mount full-scale campaigns against his grandiose plans. And that's when the Republican lobbying machine will be running full throttle.