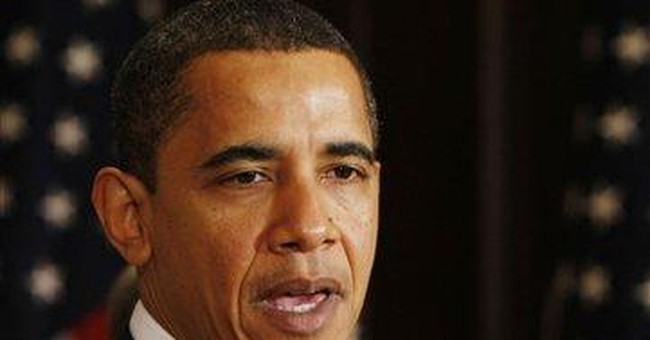 WASHINGTON -- Barack Obama is learning a psychological lesson from a former president about the economy and what happens when you keep comparing it to the Great Depression.

For almost two months of his presidency, he has been persistently and politically negative about the economy, even pessimistic, portraying it in near-hyperbolic terms. As a result, the financial markets fell into a deeper nose-dive than before and consumer sentiment, already in the dumps, worsened.

He talked repeatedly of the "deepening economic crisis," the "big mess" and the "fiscal disaster" he inherited. He seemed locked into his campaign's New Deal mythology that we were in the 1930s and that he was FDR.

And as Wall Street plunged, the country's mood turned darker.

His advisers warned that he was talking down the economy too much, scaring the business community, needlessly stoking fear among already insecure consumers, and failing to give Americans reasons to believe that, as bad as things are now, the economy will get better.

In the past couple of weeks, the White House has dramatically changed its tune.

First, all of this silly talk about being in another Great Depression was nonsense. Not even close, Obama's top economic adviser said last week. Nearly one-third of the country was jobless in the 1930s. Unemployment now is about 8 percent.

The recession we are experiencing, while severe, "pales in comparison" with the Great Depression, Christina Romer, chairman of the President's Council of Economic Advisers, told the Brookings Institution last week.

Indeed, the present downturn in no way approximates the Great Depression. In fact, there were glimmers of hope that things might be getting better, said Lawrence H. Summers, director of the White House National Economic Council, and Obama's chief economic adviser.

In remarks to a Brookings audience last week, Summers ventured to say that he was "modestly encouraged" by signs that "consumer spending in the U.S., which was collapsing during the holiday season, appears, according to a number of indicators, to have stabilized.

"What we need today is more optimism and more confidence," Summers said.

And that's what Obama delivered in a chameleonlike, fence-mending address and question-and-answer performance last Thursday before an audience of business tycoons.

To a large degree, the news media ignored the real news in the event -- Obama insisting that he, too, believed in free-market economics, capitalist risk-taking, wealth creation and -- brace yourself -- "profits." In response to business concerns that he will impose draconian rules and regulations on them and slap them with higher taxes, the president said he was willing to deal on carbon-emission tax levels and could favor lower corporate tax rates, too.

In an address before the Business Roundtable, whose elite roster is a who's who of the country's richest companies, Obama at times sounded like a cross between capitalist crusaders Ronald Reagan and Jack Kemp.

Among the statements Obama rarely, if ever, voiced in his campaign speeches before the Democratic faithful:

-- "I've always been a strong believer in the power of the free market. It has been and will remain the very engine of America's progress."

-- "I believe that jobs are best created not by government but by businesses and entrepreneurs like you who are willing to take risks on a good idea. And I believe that our role as lawmakers is not to disparage wealth but to expand its reach; not to stifle the market but to strengthen its ability to unleash creativity and innovation that still makes this nation the envy of the world."

-- He doesn't "want to get the government in everybody's business ... I want you guys to do your thing."

-- "This is the most dynamic economy on earth, and our capacity (for economic growth) is undiminished ... Things are going to get better. I tend to be pretty optimistic."

It was a remarkable switch in tactics and tone. In the Q&A, Citigroup chairman Richard Parsons lectured him about needlessly provoking fear that was undermining public confidence. Obama didn't disagree.

In the depth of the 1981-1982 recession, when unemployment topped 10 percent, Reagan talked repeatedly of the need to "renew optimism and confidence and rekindle the nation's entrepreneurial instincts and creativity." The New York Times said that it sounded like "psychonomics," stating that Reagan seemed to be administering a form of "group therapy" to the business community and the nation at large.

In a radio address in 1984, Reagan talked about the psychology of the economy back then that mystified the Times, explaining that "I remember saying back when things looked worst that too much pessimism could be deadly. There's a psychological factor in recession, and too much hammering at it makes recession worse."

Obama is finally beginning to learn this lesson, too.