From Bad to Worse: Obama's Math Doesn't Add Up 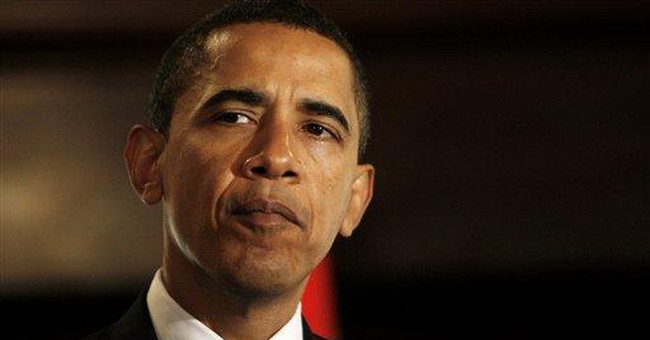 WASHINGTON -- Even economists who agree with Barack Obama that we need another stimulus are questioning his exuberant predictions that his spending plan will produce or save 3.7 million jobs.

That number was contained in the upwardly revised job-creation figures that economic advisers Jared Bernstein and Christina Romer came out with this week in an effort to boost congressional support for Obama's costly stimulus package amid growing skepticism that it will work.

But buried in the news accounts of the new, hard-to-believe estimates -- or ignored altogether -- was a caveat that Bernstein and Romer slipped into their memo to the president-elect: "It should be noted that all of the estimates presented in this memo are subject to significant margins of error," the two advisers wrote.

They also warned that there's a limit to how much money the federal and state bureaucracies can effectively dish out to public-works projects in the two-year time frame that Obama has set to have a significant impact on the recession.

His advisers have justifiable reasons to be leery of their own numbers. Other economists, even those who believe another stimulus is needed, are questioning Obama's huge job numbers and the availability of shovel-ready projects that can begin putting people back to work.

"There's not enough shovel-ready (projects), so to speak. I'm skeptical of how you're going to do that in a two-year period," UCLA Anderson Forecast senior economist David Shulman told the Washington Post.

At the same time, budget analysts are beginning to voice similar doubts about the economic viability of dumping more than $500 billion into public-works projects and the long-term harm a looming $2 trillion deficit could do to the credibility of the dollar, the bond market and our financial system.

Even moderate fiscal watchdogs who see the need for some additional stimulus now question whether Obama and the Democrats are using the recession as a ruse to unleash the big-spending plans that eight years of Republican rule have prevented them from making.

"When we are talking about an $800 billion package on top of a $1.2 trillion deficit, it is necessary to draw a distinction between what constitutes stimulus and what is business-as-usual government largess," said Maya MacGuineas, the fiscal-savvy president of the Committee for a Responsible Federal Budget, in a statement last week.

"If we think about massive deficit spending as medicine for a sick economy, we also need to recognize that too much medicine can ultimately kill the patient," MacGuineas said.

Indeed, the threat of monster deficits stemming from Obama's FDR-style experimentation with large amounts of borrowed money is beginning to sow growing doubts about the size and cost of his proposal and the risks it poses to America's fiscal stability.

"We have to be careful that we don't do things which aggravate significantly in the out years this country's fiscal strength," said New Hampshire Sen. Judd Gregg, the Budget Committee's ranking Republican, in a major Senate speech last week that warned lawmakers to proceed with caution.

"And what is very critical is that, as we address trying to get the economy going by using a stimulus package, we've got to be very careful that we put in place programmatic activity that doesn't add to the long-term debt of the nation," Gregg said.

But the Democratic-run Congress, at Obama's urging, is getting set to spend another $350 billion to bail out businesses and mortgage holders who bought big, expensive homes they couldn't afford. Then it will follow that up with an $800 billion spending bill to pay for Obama's Spend Our Way Out of This Recession plan.

That will add $1.15 trillion to this year's projected $1.2 trillion deficit in the space of a month, and they're only getting started. Democrats have a long line of other social-welfare spending bills stacked up in the Capitol that they are itching to pass in the coming months that President Obama, presumably, will sign.

Do the math. The January-February spending spree alone will push the deficit to about $2.35 trillion. The federal government this year will rake in about $2.3 trillion in tax revenues. Obama's government will be spending way beyond its means.

Then throw in the fiscal tsunami that is fast approaching when 77 million baby boomers will soon begin showing up at the Social Security offices around the country demanding their Medicare and retirement checks.

"We're talking about $60 trillion coming at us. That's debt coming at us, and that doesn't count the debt we're putting on the books today to deal with this economic slowdown," Gregg told his colleagues.

George Bush's numbers and GM's bleak financial conditions will look like the epitome of probity and frugality by comparison.

That raises this frightening fiscal question posed by Maya MacGuineas: When will too much medicine kill the patient?