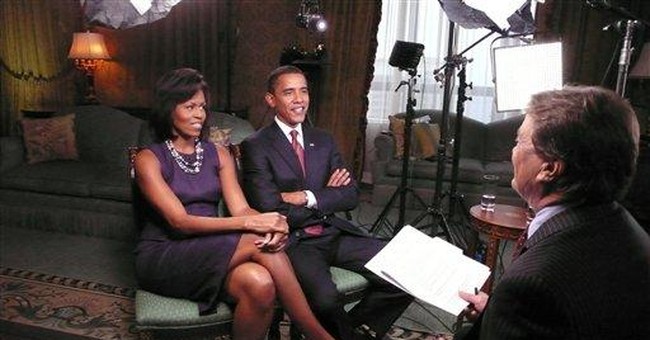 STANFORD, CALIF. -- Former Secretary of State George Shultz has a few words of advice for Barack Obama about how to deal with Russian provocations: Negotiate without appearing weak.

"President-elect Obama has to consider what kind of relationship do we try to build with the Russians, and I personally think the idea that we just try to isolate them is a mistaken one," Shultz said during a wide-ranging interview in his office at the Hoover Institution at Stanford University.

Instead, Obama should pursue "a constructive strategic dialogue with them. After all, we did that in the Cold War, and we can do it now," said President Reagan's chief foreign-policy adviser, who headed the State Department during a turbulent period of instability in the Evil Empire.

No one was closer to Ronald Reagan than Shultz in those years that led to a historic nuclear-arms agreement and the eventual collapse of the Soviet Union. At the age of 87, he remains a valued elder statesman whose foreign-policy and national-security advice is sought by leaders in both parties.

As Obama prepares to grasp the reins of power, the Russians have already begun to test him in provocative ways. They've threatened to place nuclear missiles on Russia's border if the United States carries out its intention to deploy anti-missile systems in Poland and the Czech Republic.

Asked how Obama should respond to this and other bellicose gestures and actions following Russia's invasion of Georgia, Shultz chose his words carefully:

"I'm sure he understands it. He does not want to be perceived as weak, so he will take steps to deal with that, I assume. The question is, can you be reasonable without being perceived as weak?" Shultz said.

President Reagan dealt with the Russians from a position of strength and was never perceived as weak. He negotiated an arms-control agreement, but at the same time, he was openly moving ahead with his visionary anti-missile Strategic Defense Initiative. The Russians signed the pact, and SDI became a bulwark of our defense.

Asked to assess President Bush's national-security record over the past eight years, Shultz focused on Bush's doctrine of preemptive defense against terrorism.

As Bush nears the end of his troubled presidency, Shultz said his overall record is one of "pluses and minuses" but that his success at keeping the country safe from another terrorist attack speaks for itself.

"We haven't had an attack in this country since Sept. 11, 2001, when there's been lots of attacks all over the world. We are a harder target" because of Bush's actions, he said.

In the post 9/11 era, Bush wisely established "an important idea that is still controversial but which I think has worked. That is, in an age where there are people who want to do damage to us through terrorist tactics, you want to be aggressive in trying to find out what might happen before it happens and then stop it from happening -- that is, take preventive action," he said.

"And that's an uncomfortable idea for people, particularly when the act of prevention takes place in some other country; even if it takes place in this country, it has its problems," he said.

Bush's preemptive doctrine is based in large part on electronic-surveillance intercepts here and abroad, sometimes without a court order, which drew strong opposition from civil-liberty groups and his critics on Capitol Hill and elsewhere.

But Shultz credited Bush's preemptive surveillance doctrine for keeping the United States safe and warned that our country would be a lot less safe if the Obama administration chooses a different approach.

"I think that's an important idea that if ignored will cause us harm. It's something we have to stick with," he added. On other issues, Shultz had this to say:

-- On Obama's plans to begin withdrawing all U.S. combat troops from Iraq within 16 months and the risks in doing that:

"I don't think he knows at this point what the risks are 16 months from now. One would hope that conditions would be such that we could begin withdrawing troops by that time. You don't know whether conditions will be such in 16 months that we will be comfortable in having most of our troops withdrawn. Maybe they will be, and I hope that will be so.

"But I do think that if you set a (withdrawal) date, you make it harder because you give your adversary something to play against. I think, personally, that's a mistake," he said.

"The North Korean action is part of a pattern in the way they behave. They are endless bargainers. There is no such thing as a firm agreement with them. You make an agreement, you make a compromise, and then they immediately break it in some fashion."

As Obama and the Democrats get ready to take charge of America's foreign policy and national security, they still have a lot to prove. Up until Election Day, polls showed that many Americans had doubts about their ability to keep America safe.

They would do well to heed George Shultz's cautionary advice that "the world still remains a very dangerous place."