How McCain Can Still Win 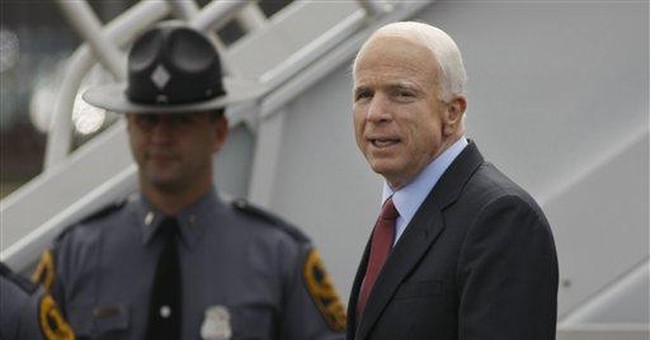 WASHINGTON -- When the economic-rescue plan was moving toward passage in the Senate last week, Barack Obama's lead in the polls was already shrinking, and a GOP tax cutter was questioning his proposals to raise taxes on a weak economy.

Both developments revealed the Illinois liberal's inherent weaknesses that John McCain needs to expose to turn around his lagging poll numbers.

First, a majority of voters still does not think the freshman senator is more adept at handling the challenges of war, national security and international crises.

Second, many Americans still harbor doubts about the core of Obama's economic plan, asking, "How can raising taxes on businesses and investors help the economy begin to grow again?"

As the nation's economic crisis worsened last month, Obama's polls rose steadily -- lengthening his lead over his Arizona rival. Near the end of September, Gallup's daily tracking poll showed Obama with an 8-point lead. McCain had been sending mixed signals throughout the debate over the administration's $700 billion rescue package. The two men had a split decision in their first debate, but the worsening economy trumped all that, boosting Obama's demands for a fresh change in leadership.

Last week, during the ups and downs of the House's stunning rejection of the rescue plan and its revival with an overwhelming vote of approval in the Senate, Gallup showed Obama's lead shrinking to 7 percent, then 6 percent, and to a narrower 4 percent edge by week's end.

McCain was fighting two opponents: Obama and a monster economic crisis that should have crushed him long ago. He showed he could handle Obama in a debate, but an economy that is now verging on the edge of recession -- and may fall into negative growth in this quarter -- was much harder to overcome.

McCain campaign strategists last week were hoping that the economic-rescue bill would ease voters' concern about the economy and that the stock market would turn around in October. But the economy's broader direction was headed south, and that kind of headwind posed a much bigger challenge.

Republican strategists were urging McCain to step up his attacks on Obama's anti-growth, tax-hike prescriptions for the economy and to push harder on his own pro-growth proposals: Cutting the corporate tax to make the United States more competitive abroad, ending the death tax, and reducing the capital-gains tax to spur investment in the economy.

Last week, the McCain campaign brought out Jack Kemp, the architect of the Reagan tax cuts, who pointed out the bizarre nature of Obama's plan to raise taxes on businesses in a sick economy.

In 1960, when Sen. John F. Kennedy was running for president, the economy was growing at a lackluster rate. Kennedy's prescription to "get the economy moving again" was to cut the top income-tax rate in the belief that, as he put it, "a rising tide lifts all boats." His tax-cut plan was enacted, and the economy took off, ending that turbulent decade with a federal-budget surplus.

Obama, on the other hand, thinks people at the top don't pay enough taxes and would raise the top rate to nearly 40 percent, even though the IRS notes the top 10 percent pay the most income taxes. His running mate, Sen. Joe Biden, said it was unpatriotic for wealthier Americans to oppose Obama's tax hikes.

But the dirty little "income redistribution" secret in Obama's plan is that he would use that money to give refundable tax credits to lower-income workers who pay no income taxes.

McCain can regain the political offensive on the economy by tearing into Obama's plan to raise taxes on corporations and investors at a time when businesses are struggling to survive and desperately in need of capital to see them through hard times.

Voters in fear of losing their jobs can identify with this. They know this is no time for the IRS to be sending business people higher tax bills when they can't pay the bills they face now.

The lifeblood of our economy is capital -- a word Obama never utters. But the core of his plan to fix the economy is to raise taxes on capital investment. John F. Kennedy would have opposed his plan.

In 1986, Ronald Reagan offered a definition of the government's view of the economy before he became president that describes Barack Obama's economic plan perfectly: "If it moves, tax it. If it keeps moving, regulate it. And if it stops moving, subsidize it."