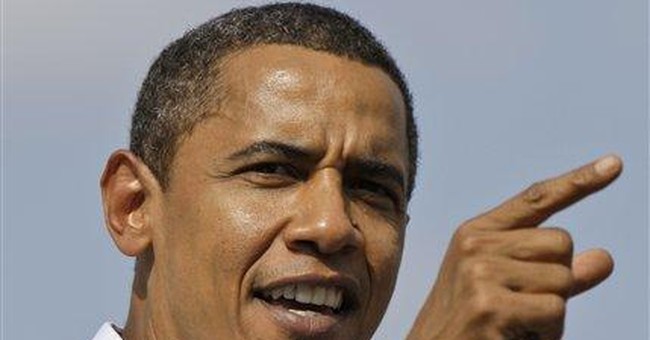 WASHINGTON -- Despite all of the political obstacles Republicans may face in this troubled election year, Barack Obama has some big problems of his own.

At a time when the GOP is swimming upstream against a slowing U.S. economy, an unpopular war and a damaged party brand, the freshman senator is showing signs of weakness in the polls amid growing questions about his inexperience and his inability to respond boldly to a national-security crisis.

Heading into the final week before his nominating convention, major polls showed him slipping in the national numbers and in a number of battleground states where he had once led but is now in a dead heat against John McCain.

The latest Pew Research Center poll reported that "Obama's lead over John McCain has disappeared." Obama had a 3-point edge (46 percent to 43 percent) compared to the 8-point margin he enjoyed in June. Other polls showed a tie or a statistical dead heat. The Gallup daily tracking poll showed the two rivals at 44 percent each one day and a few points apart the next.

More troubling for Obama's candidacy, Pew showed McCain attracting more support from his party's base, including white evangelical Protestants (68 percent to 24 percent), as well as white working-class voters. He also leads overall among white voters and crushes Obama among Southern whites by 29 points (60 percent to 31 percent).

When Pew asked 2,414 registered voters, "Which candidate would use good judgment in a crisis?" 51 percent said McCain, and 36 percent said Obama -- a 15-point lead on a critical issue in a still dangerous world.

While the poll was conducted largely before Russia's military invasion of the Republic of Georgia, its findings strongly underscored the favorable reviews that defense analysts gave to McCain's response to that crisis.

"The Obama campaign's behavior during the Georgia crisis vindicated the suspicions of many that Obama is not up to speed on major international conflicts," said Ariel Cohen, a top foreign-policy analyst at the Heritage Foundation.

"His campaign was vague and slow to react in (its) response to the Russian invasion. It's clear that Obama is within the mainstream of Berkeley, Calif., in terms of the security and defense issues that concern American voters," Cohen told me.

"I think voters are aware of the candidates' life stories and exposure to the crises, including McCain's career as a naval officer in time of war, and his work over many years in foreign-affairs issues that came before Congress, and have concluded that is better preparation to be a crisis manager than being a state senator in Illinois," he said.

But Obama's weakness runs deeper than this. Several weeks ago, he was running quite well in a number of Republican battleground states that Democrats have targeted for takeover this year. This week, McCain was either tied or had the edge in Colorado, Ohio, Virginia, Florida, Missouri and Nevada.

In Colorado, a state that has been trending Democratic, McCain has edged ahead by 3 points, according to a Rocky Mountain News poll. In Ohio, an economic basket case that Democrats swept in 2006, the Real Clear Politics Web site showed McCain with a slight edge in the pivotal state.

Obama is making an all-out effort to tip Virginia into the Democrats' electoral column for the first time since 1964. Democrats are expected to pick up their second Senate seat there in November. But Rasmussen and internal GOP polls have McCain edging slightly ahead.

In Florida, McCain has lost some ground, but is still clinging to a nearly 2-point lead. In Missouri, he leads Obama by 2.3 points. In Nevada, he is up by 3 points.

In Michigan, a must-win state for Democrats where the economy is in a full-scale depression, Obama should be flattening McCain. Instead, only a couple of points separate the two candidates, and the McCain campaign has thrown increased resources into the race there.

With the automotive industry treading water, voters have turned sharply in favor of McCain's push for offshore oil drilling, and a near majority even favors drilling in the Great Lakes. That McCain and the Republicans have made a Democratic state like Michigan competitive is astounding. A win there would be a stunning rebuke of Obama's mercurial candidacy.

Still in the throes of Obamamania, the national news media has yet to come to grips with the electorate's growing lack of confidence in a young celebrity who, until a few years ago, was just another state lawmaker, hardly qualified to be commander in chief.

Hillary Clinton's haunting primary-debate question that asked whether he was ready to handle that 3 a.m. phone call in a national crisis is being echoed in a John McCain campaign ad that asks, "Is he ready to lead?"

Voters are now asking themselves the same question.

Reagan McCarthy
Trump Says If Biden or Harris Won't Visit the Border to See Their Crisis, Then He Will
Julio Rosas
Facebook 'Most Frequently' Used Platform for Human Trafficking Recruitment: Report
Spencer Brown

A Group Of Parents Sent Their Kids' Face Masks to A Lab for Analysis. Here's What They Found
Townhall
'Why would Trump do this?' Joe Biden smiles as US journalists yell at and fight with each other before getting shoved by Russian security [pic, video]
Twitchy
Tucker Carlson Raises a Very Serious Alarm Bell About Ashli Babbitt's Murder and the Enemy Within
Redstate
The Morning Briefing: The Chrissy Teigen Cancel Choir Is Singing a Beautiful Tune
PJ Media