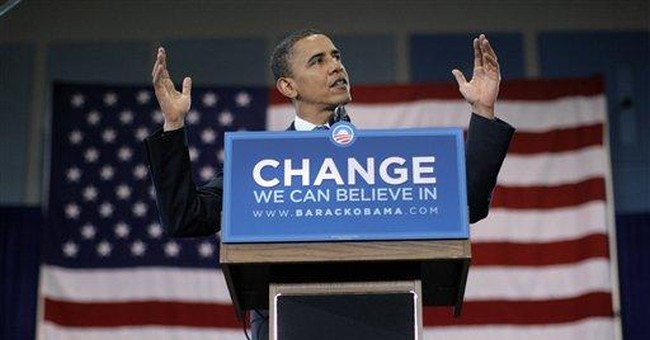 WASHINGTON - Violence has drastically declined in Iraq, the chief Sunni Muslim political bloc is ready to rejoin the Shiite-led government, and Obama campaign advisers are talking about a more gradual troop pullout plan.

These are among the remarkable developments occurring in Iraq since President Bush implemented the surge strategy -- a bold gambit that has proven all of the defeatists wrong, strengthened Iraq's fledgling democracy and given Iraqi citizens new hope for a better life.

Abandoning a nearly year-long boycott, Sunni leaders will rejoin Prime Minister Nouri al-Maliki's cabinet if their six nominees are approved by the parliament as early as this week, a move that can open the way to further reconciliation in the war-torn country. The government has met many Sunni demands for reform, including an amnesty program that released thousands of Sunni detainees this year. Its leaders were also encouraged by Maliki's tougher offensive against violent Shiite militias, particularly Shiite cleric Moqtada al-Sadr's Mahdi Army.

Meanwhile, a report from the U.S. Embassy in Baghdad last week said Iraq has met 15 of the 18 original benchmarks set by Congress to gauge its progress on political, economic and national security reforms. Still, much work remains to be done in three areas: a workable system to govern the oil industry that allows all Iraqis to share in its revenues, the disarmament of militant militia and insurgent groups, and strengthening the country's police forces.

But perhaps the most stunning political development in the aftermath of the surge's success is a grudging movement within the Obama campaign to recognize that the situation in Iraq has improved. The candidate has given signs that he's ready to scale back his defeatist-driven plans for a complete military pullout should he win the presidency in November.

In recent months, some of Obama's top national security advisers have been circulating strategy papers recommending that a significant "residual" U.S. military force be kept in Iraq to insure its stability as Iraqi government leaders work toward national reconciliation. The leader of this movement is Georgetown University defense analyst

Discarding the freshman senator's early position for a complete military pullout regardless of the situation on the ground, Kahl is pushing a more strategic, centrist approach that he calls "conditional engagement." Writing in the July/August issue of Foreign Affairs, he says this: "Rather than unilaterally and unconditionally withdrawing from Iraq and hoping the international community will fill the void and push the Iraqis toward accommodation -- a very unlikely scenario -- the United States must embrace a policy of 'conditional engagement.'

"This approach would couple a phased redeployment of combat forces with a commitment to providing residual support for the Iraqi government if and only if it moves toward genuine reconciliation," Kahl writes.

In an earlier paper in March, prepared for a workshop on Iraq for the Center for a New American Security, he wrote that "the U.S. should aim to transition to a sustainable over-watch posture (of perhaps 60,000-80,000 forces) by the end of 2010 (although the specific timelines should be the byproduct of negotiations and conditions on the ground)."

He says his article and similar proposals made in scholarly papers and working groups are entirely his own and do not necessarily represent Obama's developing positions about what to do in Iraq.

Certainly, Obama's positions have been evolving though there is no clear sign as yet that he has openly embraced Kahl's recommendations. But he has gone from an "immediate" pullout to one that would remove one or two brigades a month until all combat forces are out in 16 months. Then came his statement that he would consult with commanders on the ground before proceeding with any troop withdrawals.

He opposed the surge at the outset. "I am not persuaded that 20,000 additional troops in Iraq is going to solve the sectarian violence there. In fact, I think it will do the reverse," he said in January of last year. But now, with the picture improving in Iraq, the freshman senator is not so sure of his judgment.

His foreign policy advisers, like Kahl, urge caution. In March, Samantha Power, his former foreign policy mentor, told the BBC, "You can't make a commitment in March 2008 about what circumstances will be like in January of 2009." Last week, Obama's foreign affairs adviser Susan Rice said that "he will listen to his commanders on the ground, he will follow and heed their advice as he decides how at the strategic level we must proceed." Kahl counsels a minimal near-term drawdown to "perhaps 12 brigades" whose mission would "switch to counterterrorism, training and advising of the Iraqi security forces, and force protection for U.S. civilians and advisers."

Such advice represents an abrupt shift away from the rhetoric-filled pullout plans that won over the antiwar base of Obama's party and propelled him to the nomination. That begs the question: what will his disappointed base do now?