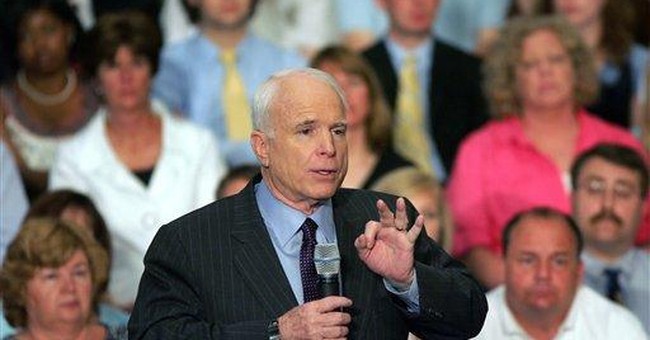 WASHINGTON -- If the presidential election hinged on who could best protect us from terrorism, veteran Sen. John McCain would probably defeat freshman Sen. Barack Obama.

The Arizona Republican beats the Illinois Democrat by 19 points (52 percent to 33 percent) when voters are asked who would do a better job on that issue, according to the latest USA Today/Gallup Poll.

The inadvisability of answering loaded hypothetical questions aside, no wonder Charlie Black, McCain's top strategist, told Fortune magazine that the senator's stock would rise if there was a terrorist attack between now and Election Day.

On the bedrock issue of terrorism, Americans trust the decorated war veteran, fighter pilot and national-security leader far more than they do the youthful, inexperienced former neighborhood organizer from Chicago.

But terrorism is not the leading issue in the country today. It ranks fifth among the eight election issues that are most important to the American people. Obviously, it would climb to the top of the list if we were attacked, but that isn't likely to happen while George W. Bush is in the White House. Whatever his deficiencies as president, he will leave office in January with the vast majority of Americans acknowledging that "he has kept us safe" since Sept. 11, 2001.

Some of the results of this and other polls are notable for their inherent contradictions.

For example, Obama beats McCain on who can best handle the energy crisis by 19 points -- 47 percent to 28 percent. But in other polls, voters by lopsided margins support McCain's solutions more than Obama's.

Obama blames "greedy" oil companies, futures speculators, gougers and OPEC, but Gallup Polls over the past year reveal that "the intensity with which Americans see oil companies as 'gas price villains'" has been fading." Indeed, Americans blaming the oil companies for skyrocketing gas prices fell from 34 percent to 20 percent," with even fewer blaming the oil problem on the Middle East, the Iraq war or other "oil heavies."

"Americans suggesting prices are increasing as a result of the economic forces of supply and demand increased from 10 percent to 15 percent while 6 percent now point to speculators," Gallup said. More Americans mention the shortage of oil supplies.

These are among the causes and problems that McCain points to as he proposes that we boost oil production as part of a multistep energy plan to reduce prices. Obama is patently hostile to further oil exploration and drilling.

While the USA Today poll finds Americans favoring Obama on energy over McCain, a separate Gallup Poll shows they support drilling in U.S. coastal and wilderness areas by 57 percent to 41 percent -- places that Obama says would be off-limits under his policies.

This apparent confusion suggests that the electorate still does not know enough about the candidates and the details in their agendas.

Another inexplicable anomaly in the issues being polled: If Obama is perceived as far better than McCain on most of the top problems facing the country, why does Gallup's daily-tracking poll (June 23 to June 25) of registered voters show the contest is a tossup -- 44 percent to 44 percent?

One possible reason for this discrepancy: the racial polarization in an Obama-McCain contest. An ABC News/Washington Post poll last week showed McCain leading his Democratic rival among white voters by 51 percent to 39 percent.

To be sure, this election is in its infancy, with much of the electorate still sorting through their feelings about the candidates -- a process that won't begin to get serious until after Labor Day. That's why it remains a tossup and likely will throughout the summer.

One voter statistic to watch: Obama holds a substantial lead among younger Americans, leading McCain by 59 percent to 32 percent among voters under 30. But voters in their 20s have a poor turnout rate overall and may not deliver their hoped-for windfall.

Notably, though, there is little or no gender gap in voting preferences among those in their 40s, according to Gallup. This suggests that these Americans, who have high turnout rates, too, are up for grabs and could decide the election.