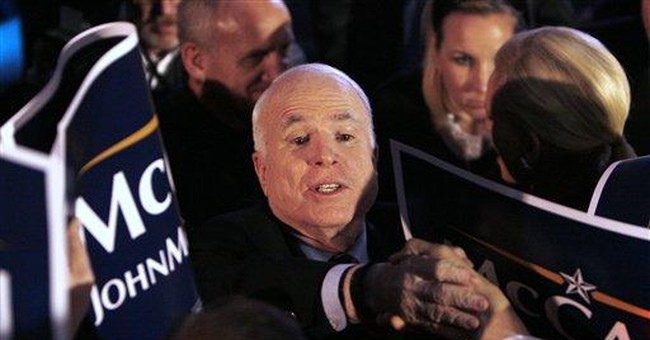 Remember when John McCain was proclaimed politically dead? The pundits on the left--and even a few on the right--declared that McCain had sunk his promising candidacy by allying himself with Bush and the Iraq war. The wise men told McCain, "Back away from the war. Give up on Bush." McCain didn't, and now look at him.

So what is the reason for McCain's surge? Basically, it's due to the success of Bush's Iraq surge. Despite the Republican losses in the 2006 midterm election, losses that were attributed to an unpopular war, Bush responded not by giving in to his critics but by escalating the war. He sent in another 20,000 troops. He also put a new fellow, General Petraeus, in charge.

Remember Gentral "Betray Us"? This was the epithet devised by the leftist group Moveon.org in an attempt to discredit Petraeus. The smear didn't work, butin a sense Moveon.org was right. General Petraeus has betrayed the left. He has betrayed them by not losing the war and in fact by turning around a bad situation. While Petraeus was cautious in his predictions, the results are better than could have been reasonably hoped. While the violence certainly hasn’t disappeared—just recently there was a horrible incident--but overall it is down. Sectarian strife has markedly abated. Attacks on Americans and American combat deaths have plummeted.

Before last week’s bombing which received extensive coverage, the media was having trouble reporting bad news out of Iraq. I saw a new story on a major network about a Marine who had been denied his health benefits. Apparently the fellow wasn't given the proper checkup. What does this story mean? It means that for quite some time now the anti-Bush legions in the media haven’t had anything better to report. Lacking stories of Americans coming home in body bags, they now have to dwell on the fellow who didn't get back his urine test on time.

Now that Bush's Iraq policy is working, the media pundits are proclaiming Iraq a "secondary issue." Now they want to talk about the stock market and the housing crisis. But the American people aren't dumb. They know the Iraq war and America's battle against Islamic radicalism remains central. And they have figured out that McCain is a solid and brave man. I am not just referring to his personal bravery in the prison camp in Vietnam. I am referring to his political bravery in sticking with an Iraq policy that seemed politically doomed. Now we hear Romney and Huckabee praising the surge, but McCain was for the surge when being for the surge wasn't cool.

Now I realize many conservatives have serious reservations about McCain, and I share some of them. His campaign finance ideas are terrible and he seems to pander too much to the liberals. Even so I don’t understand the criticism that says McCain isn’t conservative. If Bush is a conservative, then McCain is a conservative. He’s very strong on defense, he’s fiscally conservative, and he’s pro-life. He may be too old and he may be too conciliatory. If there’s a problem with McCain it’s not that he’s a liberal in disguise.

Let’s also remember that electability remains a valid issue. Politics is a choice among the options that are actually on the table.

Consider what’s happening on the Democratic side. The naive Obama continues to attack the wily Hillary for voting for the Iraq war, and Hillary continues to duck and weave in that distinctively Clinton fashion. Her response is essentially, "Well, I'm not sure I voted for it. It all depends on your definition of the term vote." These two are both hoping and staking their candidacy on an American loss in Iraq. If America wins in Baghdad, their chances to recapture the Oval Office are sorely diminished. It's hard for me to see how Americans can sympathize with such partisans of defeat. Compared to these two, McCain cannot help but stand tall.