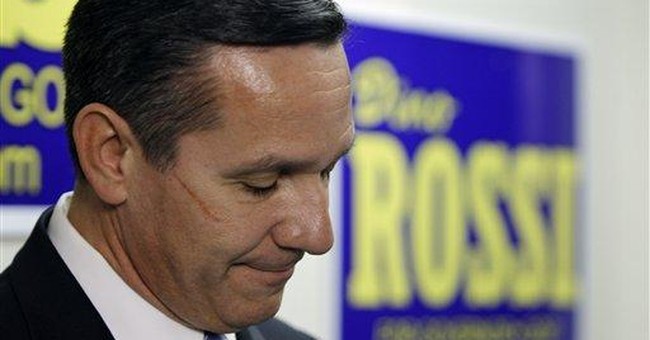 Signs of an unmistakable Republican trend are brightening the chances of a GOP takeover of the U.S. Senate. A recent Rasmussen poll showed Republican Dino Rossi 1 point ahead of incumbent Sen. Patty Murray in Washington state. The Rossi lead -- obviously within the margin of error -- came after he had trailed by 3 points in previous polling.

Most significantly, Rossi led by 2 points among those who already had voted using Washington's early voting option. Murray led by a point among those who had not cast their ballots (some of whom presumably will not do so).

If Rossi wins in Washington, it would be the ninth Republican takeaway, with 10 needed for control. Right now, Republicans lead in the races for the following Democratic-held Senate seats: North Dakota, Arkansas, Indiana, Pennsylvania, Wisconsin, Illinois, Nevada, Colorado and Washington. Only in West Virginia has the Democrat, Gov. Joe Manchin, gained in recent days. If John Raese, the Republican nominee, can close the 3-point gap that now separates him from Manchin, the Senate will go Republican.

In the past week, Republicans have improved in Colorado, Pennsylvania, Illinois, Nevada, Wisconsin and Washington. The signs of a trend are developing.

Less visible is the trend going on at the House level. In district after district, Republicans' poll numbers are improving, and there is increasing evidence of a sweep of truly historical proportions.

Our own efforts through Super PAC for America are bearing fruit, and the poll data from the 24 House races in which we are working are encouraging. Most interesting was the fact that Barney Frank has dropped below 50 percent of the vote, a sign of possible defeat. Please donate funds to help us move the numbers in these races. To donate, go to http://www.superpacusa.com.

The most important indication of an even stronger GOP trend is the fact that early voters are far likelier to be registered Republicans than they were in 2008. In that year, Democrats tended to outnumber Republicans in early voting by an average of about 15 percent. Now the Republicans, who have fewer total registered voters, are running slightly ahead of the Democrats and 15 to 20 points ahead of their pace in 2008.

The "Daily Show" interview with President Barack Obama reflected the liberal angst that is depressing the Democratic turnout. Pressed as to whether he had been timid and criticized for appointing "the same people" (e.g., Larry Summers) who had failed the nation's economy before, Obama had no good answers. The lack of a message was evident through all the bonhomie of the interview.

But none of this will work unless Republicans have a good turnout. It is up to each of us to make these poll numbers into reality Nov. 2.