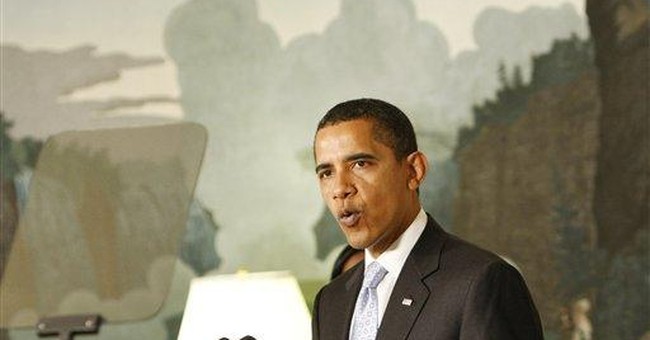 Apparently, here's the deal: If you are a longtime enemy of the United States, count on a grand reception from the Obama administration. All is forgiven and, worse, forgotten. But if you have a track record as an ally or friend, you won't get the right time of day.

Consider how our enemies are being treated:

Fidel Castro's Cuba? The travel restrictions will be lifted and, doubtless, soon the embargo will be repealed.

Hugo Chavez's Venezuela? Despite the proof of political imprisonment, repression of liberties, confiscation of newspapers, and electoral violence and fraud, Secretary of State Hillary Clinton tells Chavez that "ideology is so yesterday," and Obama give Chavez a "yo bro" handshake.

Vladimir Putin's Russia? It invaded Georgia, but who's counting? We are "resetting" the relationship.

Israel? Vice President Biden warns against military action to stop Iran from getting the bomb. And Defense Secretary Gates joins the chorus. The administration pressures Israel to buy into the two-state solution, requiring it to recognize a Palestinian state dominated by Hamas and dedicated to the destruction of Israel. The last time Israel ceded territory to the Palestinians, they used the land for new rocket launching pads.

Britain? Obama returned the Churchill bust and humiliated Prime Minister Gordon Brown by giving a gift of some DVDs on his visit.

Colombia? While President Uribe battles those who want to send drugs into our country and faces a military buildup from neighboring Venezuela, Obama won't submit the free trade deal with Bogota to the Senate.

And, within the United States, we free the Guantanamo terrorists while we investigate and potentially prosecute those who interrogated them in an effort to protect us all from their planned mayhem.

Oblivious to the record of terror attacks thwarted by enhanced interrogation techniques, Obama opens the door to prosecuting -- criminally -- those who authorized them.

Does he not realize that there would be no Brooklyn Bridge -- and ten thousand people would have died in the waters of the East River -- if we had not waterboarded Khalid Sheikh Mohammed? After the National Security Administration picked up mentions of the "Brooklyn Bridge" in its warrantless wiretaps, it alerted New York City Police Commissioner Ray Kelly to the possibility of a terror attack against the bridge. Kelly flooded the bridge with cops and commissioned an engineering study to determine how one could bring down the bridge, plunging ten thousand people into the East River during rush hour.

The study said it was impossible to blow the bridge up -- one would have been discovered -- but that a terrorist could sever the cable holding it aloft with a torch. It would take weeks, but the terrorists could work, undetected, in a vacant building that housed the cables under the bridge. The traffic noises would mask their efforts, and the building was not patrolled or even visited by anyone.

The terrorist noted the cops on the bridge and sent a message, intercepted by the NSA, that it was "too hot on the Brooklyn Bridge." But it was not until we waterboarded Mohammed that we learned the identity of the al-Qaida operative -- Lyman Farris. On learning his name, the New York Police raided his Brooklyn apartment. Chillingly, they found the equipment he would need to bring down the bridge and an engineering diagram (akin to that which Kelly had ordered) identifying where they would have to stand to cut the cables.

Does Obama really want to prosecute the anti-terror investigators who saved thousands by waterboarding Mohammed and learning this information?

Yes, he damn well does!