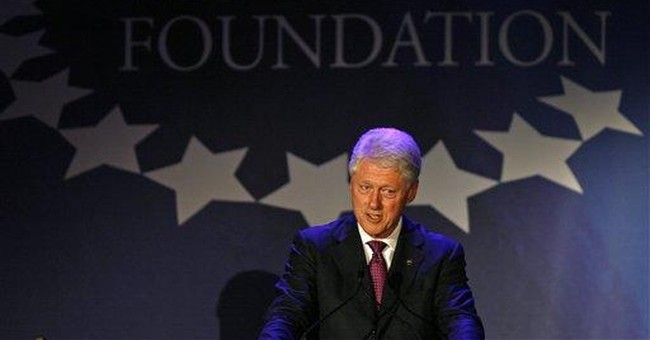 Now that Bill Clinton has released the list of his 205,000 donors who have given close to $500 million to his library and foundation, it is clear why he resisted releasing the list while his wife was running for president.

Particularly troubling are the massive donations from Arab governments in the Middle East. How can a secretary of state possibly be impartial in conflicts involving Israel when her husband has gotten tens of millions of dollars from Arabian governments and high-ranking people. Specifically, Clinton got:

-- The government of Saudi Arabia

Between $1 million and $5 million from:

-- The government of Kuwait

-- The government of Qatar

-- The government of Oman

-- The government of Brunei

-- The Zayed Family, rulers of Abu Dhabi and the United Arab Emirates

He also received between $500,000 and $1 million from Saudi businessman Walid Juffali.

Pardon us for looking such generous gift horses in the mouth, but it is hard to imagine so many governments, monarchs and businessmen in the Middle East giving money unless it was with some hope of a political return on their investment. Will that return now come with the appointment of Mrs. Clinton as secretary of state?

After all, the next secretary of state will be called upon to mediate and negotiate conflicts in the Middle East as her first assignment. How can Hillary Clinton undertake to do so impartially when her husband's library and foundation -- over which he has total control -- have been bankrolled by the very nations with whom she must negotiate?

The list reveals another key center of conflicts of interest in Kazakhstan, the former Soviet Republic, now home to some of the world's greatest mineral deposits and ruled by a corrupt dictator, Nursultan A. Nazarbayev, who according to The New York Times has all but quashed political dissent."

Clinton visited Kazakhstan and met with its president on Sept. 6, 2005, accompanied by Canadian mining financier Frank Giustra. Soon after, Giustra was awarded a highly lucrative contract to mine uranium there. Now, lo and behold, Giustra turns up having given the library and foundation $10 million to $25 million and the Clinton Giustra Sustainable Growth Initiative-Canada gave $1 million to $5 million more. And Clinton got $1 million to $5 million from Laksmi Mittal, the fourth wealthiest person on the Forbes billionaire list and a member of the Foreign Investment Council in Kazakhstan.

In addition, Clinton further fished in troubled waters by taking $1 million to $5 million from Victor Pinchuk, the son-in-law of the controversial former president of Ukraine.

Given the complexities of U.S. policy toward the former Soviet republics in Central Asia, it is hard to see how this massive and incestuous relationship cannot but complicate Hillary's independence.

One of the largest donors to the library and foundation was UNITAID, an international organization largely controlled by France, which donated more than $25 million. And the conflicts of interest are not all just foreign. Corporate bailout recipients and wanna-be recipients donated to the Clinton fund. They include: AIG, Lehman, Merrill, the Citi Foundation and General Motors.

And, almost as an afterthought, the list reveals a donation of at least $450,000 from Denise Rich, presumably in return for her ex-husband's presidential pardon.

How could a United States senator possibly serve dispassionately while her husband was collecting money from these donors on this kind of scale? And how could we have almost elected a president without realizing these conflicts existed? And how on earth can a secretary of state function with these conflicts hanging over her head?